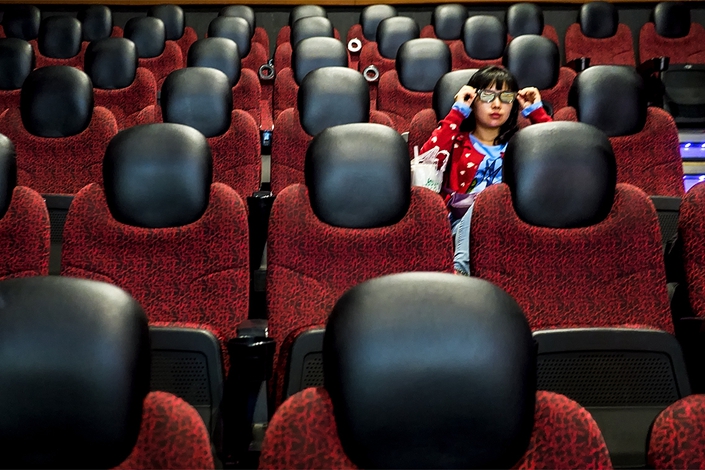 For the first half of 2019, China’s box office suffered its first decline in eight years. Photo: VCG

Huayi Brothers Media Corp. grabbed headlines earlier this month when it said it’s selling some of its cinema equipment on lease-back terms for 40 million yuan ($5.8 million).

The 25-year-old company, one of China’s largest private film studios, is selling projection gear from four cinemas to Hebei Financial Leasing Co. Ltd., which has agreed to lease it back to Huayi for 24 months.

The move came as it faced “increased operating pressure and heated competition in the industry,” the studio said.

Huayi isn’t alone among China’s large number of cinema operators. Industry observers said the movie theater industry is likely approaching a period of consolidation as the business faces abundant challenges: a drop in viewership even as cinema chains have continued to add theater screens, insanely high rents that eat into profits, and a government-imposed limit on foreign titles.

Industry veteran Wang Zheng still remembers an incident in which he lost a cinema location to a rival. In 2016, his company, the Jiangsu Broadcasting Corp.-backed Omnijoi Media Corp., was the dominant theater chain in East China’s Jiangsu province. At the time, Omnijoi ran nearly 90% of the “quality cinemas” in the province, Wang said, and that rent averaged at 800,000 yuan ($116,320) a year.

Wang was very confident that he could land another new location in a shopping mall, but a competitor snapped it up by offering 1.2 million yuan in annual rent.

“That’s exorbitant,” Wang recalled. “Cinemas at that location could only make 400,000 yuan a year at most. Why would they want to invest over a million yuan just for the sake of expanding?”

China’s cinema scene has boomed since 2012, when authorities increased the quota for the number of foreign films allowed to be shown domestically to 34 from 20. In 2015 alone, the number of theaters surged 32% from the previous year to 6,500, according to data from industry tracker EntGroup Inc.

But the good times didn’t last.

For the first half of 2019, China’s box office suffered its first decline in eight years, a sign that the market was cooling after years of white-hot growth. Ticket sales slid 2.7% to 31.2 billion yuan, EntGroup data showed. In North America over the same period, ticket sales slumped 9.4% to $5.6 billion.

Some 808 million people went to the movies in China in the first six months of this year, down from about 901 million from the same period a year ago, according to industry regulator the National Radio and Television Administration.

The changes have already taken a toll on some theater chains. For the 12 months through June, as many as 470 theaters in the country had shuttered — twice as many as a year earlier — either for good or for what they called “undergoing renovations,” according to EntGroup data.

One casualty was midsize theater chain Perfect World Cinema, which closed down earlier this year and sold off more than 30 theaters that it operated. Cinema investor and manager Bingo Group Holdings Ltd., meanwhile, has opted to seek partners to help it jointly run its cinema business for the next two years, rather than plowing in its capital all on its own.

Such developments came in the wake of major player SMI Holdings Group Ltd., which came clean in December about the $60 million or more of unpaid wages and rent that it owes. It said it had suspended operations at nearly half of its 320 cinemas.

Market players including Jimmy Wu, CEO and founder of Lumiere Pavilions Ltd., which operates more than 40 theaters across China, urged authorities to ease restrictions on what they could show at their theaters. They said more outstanding foreign films — not necessarily those from Hollywood — should be brought in to shore up the box office

China’s number of cinema screens had expanded exponentially in recent years. In 2017, there were 50,776 screens, about 9,600 more than those in the previous year. The number went up to 60,079 last year.

“The total number of screens across the country has breached 60,000,”said Ren Zhonglun, chairman of Shanghai Film Group, a state-owned distributor. “That requires a sizeable number of films to attract customers.”

China’s film market remains tightly regulated, with the foreign film quota unchanged since 2012. There have been some signs of loosening, but there has been no official word about increasing the quota. In addition to that cap, under which parties share revenue, the government also permits an unspecified number of foreign films into the market on a flat-fee basis.

A total of 129 foreign films were shown in China last year, compared with 109 in 2017, according to data from the China Film Distribution and Exhibition Association.

While there is no substantial evidence that the rising trade tensions between Beijing and Washington have affected Hollywood film imports to China, only 27 American titles had been approved for screening through this July, down from 36 during the same period last year.

“Movie production is a high-risk business and whether a title sells will determine that year’s overall box office,” said Zhang Xin, a London-based analyst with consultancy IHS Markit, which tracks the Chinese film and cinema industries.

All of the industry’s stakeholders should brace themselves for potential ups and downs because there is no secret formula for success, Zhang said.