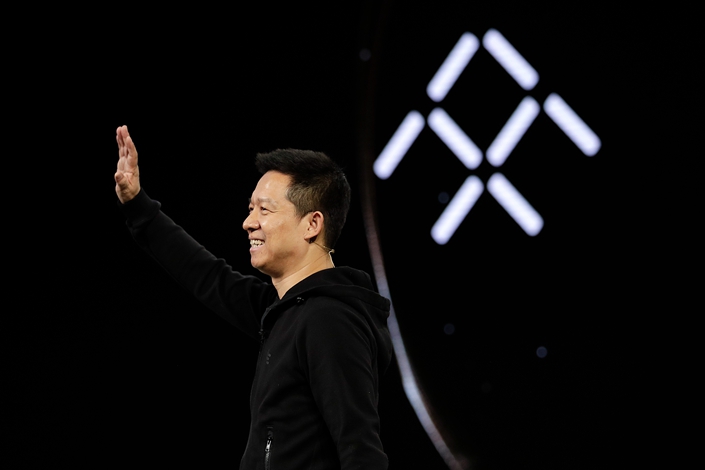 Jia Yueting waves at the unveiling of Faraday Future's FF 91 electric car at a conference in Las Vegas on Jan. 3, 2017. Jia abruptly resigned as head of the company on Tuesday. Photo: IC Photo

Entrepreneur and blacklisted debtor Jia Yueting is handing over the CEO role at Faraday Future, the U.S.-based electric vehicle (EV) startup he founded.

Jia will be succeeded at Faraday Future by BMW veteran Carsten Breitfeld, who also has previously held positions at two China-based EV startups. Faraday Future has also kicked off a search for a new global chairman, according to a Tuesday announcement.

Jia, who retains a 33% stake in and full control of Faraday Future, will become “chief product and user officer” to “oversee AI, product definition, user experience and the overall implementation of the internet eco-system model,” the company said.

The announcement said Breitfeld’s focus will be on launching production of the company’s flagship FF 91 model and the final development of the FF 81, a mass-market model.

Production of the FF 91, a luxury SUV, was originally meant to begin in late 2018, but has been delayed.

Faraday Future’s latest executive shuffle comes a week after the company issued a statement in which it said that it began to restructure its organization in late 2018. The statement said that there have been several top management changes and Jia “has repaid more than $3 billion in domestic (Chinese) debt through various means during the past two years.”

As Jia is faced with debts that have resulted in multiple court orders freezing his assets, including his Faraday shares, he has established a “debt repayment trust” to deal with those obligations and “has made it a priority to repay them as quickly as he can,” the statement said without elaborating on the nature of the debts or the trust.

“I gave up everything to make sure Faraday Future will succeed, and to fully repay my remaining guarantor debt as soon as possible, and ultimately to realize the dream of revolutionizing the automotive industry,” Jia was quoted as saying.

The debts the statement refers to are likely those of LeEco, the once high-flying video streaming site founded by Jia, which ran out of cash after years of aggressive expansion. Jia fled to the U.S. in the summer of 2017 and has not returned since. He left behind debts that reached 11.9 billion yuan ($1.65 billion) at the end of 2018, despite the country’s securities’ regulator asking him to return and “fulfill his duties.”

Due to this, Jia has been barred indefinitely from traveling via train and air in China since mid-2018 after being listed as a debt defaulter in 2017.

Leshi Internet Information & Technology Corp., the Shenzhen-listed arm of embattled LeEco, reported its 2019 interim results last week, which suggested that little progress has been made on reducing its debt burden. Leshi reported a net loss of more than 10 billion yuan for the first half, an eightfold increase from a year earlier.

In December 2018, a U.S. district court in California froze Jia’s 33% stake in Faraday Future and put a protective order on four pieces of property he owns in California, after a Chinese creditor filed a lawsuit against him. Jia has been ordered to attend a Sept. 11 hearing.