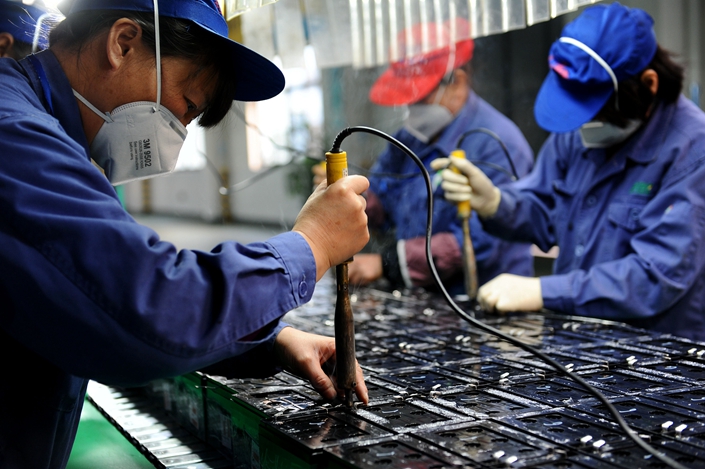 Established in 2009, Farasis has two production sites in China — one in Jiangsu province and the other in Jiangxi province. Photo: VCG

A Chinese battery-maker will seek to recharge its cash stocks by listing on the country’s new Nasdaq-style tech board, as it tracks to post a second straight year loss amid Beijing’s ongoing cuts to electric vehicles subsidies.

Farasis Energy (Gan Zhou) Co. Ltd. has applied to offer 214.1 million shares on Shanghai’s tech board, a prospectus filed to the Shanghai Stock Exchange on Tuesday shows. The company said it would plow the proceeds into a lithium-battery production project and other operating expenses.

The tech board will now decide whether to approve the application.

After deducting gains from extraordinary items such as investment products, Farasis posted a net loss of 21.8 million yuan ($3.1 million) in the first half of this year. The company bled 198.8 million yuan in 2018, after making a profit of 9.3 million yuan the year prior.

After years of breakneck growth, China’s electric car industry is slowing after Beijing tapped the brakes on the industry subsidies that built it. That’s in turn squeezing companies that make batteries to power them.

In what Beijing says is a bid to make the industry more self-sufficient, it will phase out by 2020 all subsidies for new-energy vehicles (NEVs) — a category that includes pure electric and hybrid electric cars. The latest cut came into effect in June after the threshold for handouts was raised last year

Chinese sales of NEVs contracted in July for the first time since the start of 2017. Sales dropped for a second straight month in August, declining 16% from a year earlier to 85,000 units.

The largest two battery-makers in the country — Contemporary Amperex Technology Co. Ltd. (CATL) and BYD Co. Ltd. — have weathered the storm given their massive shipment scale, posting strong earnings performances in the first half of this year. But both warned of the risk that sales could weaken after the subsidy cuts.

Farasis’ profitability lags that of the bigger players. Its gross profit margin was 18.93% in the first half of the year, lagging industry leader CATL's 28.88%, and the industry average of 26.5%.

Established in 2009, Farasis has two production sites in China — one in Jiangsu province and the other in Jiangxi province.