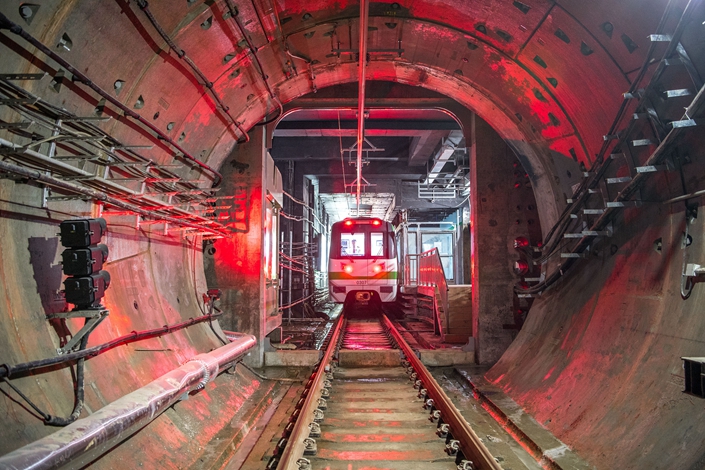 A locomotive prepares for departure on the Hefei Metro in Hefei, East China's Anhui province, on Sept. 5. Photo: VCG

Beijing has instructed local governments to submit their plans for issuing special-purpose bonds as soon as possible, Caixin has learned.

The directive signals that central government policymakers are in a hurry to square away funding for growth-boosting infrastructure projects amid fresh signs that growth is slowing.

The Ministry of Finance and the National Development and Reform Commission (NDRC), the country’s top economic planning agency, issued the directive at a meeting Friday in Beijing, according to multiple people in attendance.

Local governments have begun submitting plans to Beijing that show how the money raised from issuing special-purpose bonds will be used, according to an official from a local government’s financial department who attended the meeting. Once they receive the NDRC’s approval, they can start preparations to issue the bonds.

Local governments’ special-purpose bonds, designed to raise money for public works including infrastructure projects, are generally repaid with returns from the projects that receive the specific funding. In recent years, Beijing has made use of the bonds to raise more money for infrastructure investment to boost economic growth.

This year, China allowed local governments to raise up to 2.15 trillion yuan ($301.68 billion) through new special-purpose bonds. As of the end of August, they had used more than 93% of the quota, according to finance ministry data (link in Chinese).

Some officials and analysts believe that China could allow local governments to dip into next year’s quotas as soon as this year’s fourth quarter.

Earlier this month, the State Council, China’s cabinet, said that the country will allow early use of next year’s quotas for new special-purpose bonds, without specifying just how early.

Escalating trade tensions with Washington has also cast a shadow over the economy after U.S. President Donald Trump threatened last month to raise tariffs on all Chinese imports — worth around $550 billion yuan a year.