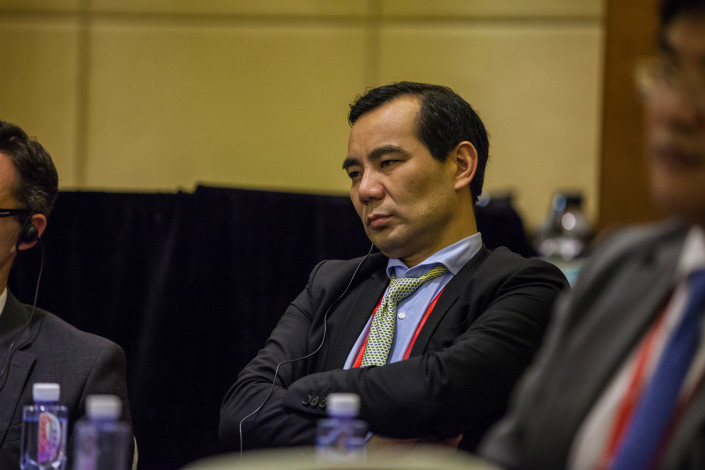 A Shanghai court auctioned off four villas Thursday that were owned by Wu Xiaohui, jailed founder and former chairman of embattled Anbang Insurance Group, to enforce fraud and embezzlement sentence.

The four villas, located in the scenic city of Hangzhou in Zhejiang province, were sold at public auction for a combined 71 million yuan ($9.97 million), about 42.7% higher than the asking prices, according to a document from the Shanghai No. 1 Intermediate People's Court.

The auction attracted dozens of bidders, and the winning bids were all submitted by individual buyers, the court document showed.

The property auction is part of the legal process of unwinding the assets of Wu to implement the verdict against him. Wu was convicted in May 2018 of fundraising fraud and embezzlement. In addition to 18 years in prison, the court ordered confiscation of 10.5 billion yuan ($1.65 billion) of Wu's assets and the return of more than 75 billion yuan of illegal gains.

In 2004, Wu founded Anbang as a car insurance company with registered capital of 500 million yuan. He quickly expanded the company into a global conglomerate with around 2 trillion yuan in assets and businesses including insurance, banking, investments, hotels, and property development.

In 10 years, Anbang grew into China's third-largest insurer and a high-profile global shopper. The company spent around $16 billion in an overseas acquisition spree over 18 months beginning in October 2014, buying trophy assets including the iconic Waldorf Astoria Hotel in New York. Most of the deals were funded by borrowed money.

The reckless expansion of Anbang caught regulators’ attention. A formal investigation of the company by the top insurance industry regulator was launched following the downfall of Xiang Junbo, former head of the China Insurance Regulatory Commission (CIRC), in April 2017.

Insurance industry sources told Caixin that Anbang had the capacity to “push regulatory limits” and get regulators to revise rules because of Wu's close ties to CIRC officials.

Wu stepped down from the company in June 2017 shortly after he was detained by police.

The insurance regulator took over Anbang in early 2018 as the debt-ridden conglomerate struggled to repay customers.

Under the regulator’s guidance, Anbang has since started to offload global assets acquired over the past few years, including its luxury hotel portfolio.

Liang Tao, vice chairman of the China Banking and Insurance Regulatory Commission, said in July that Anbang had disposed of, or is in the process of disposing of, more than 1 trillion yuan of assets.

Anbang will be barred from getting into new insurance businesses after its subsidiaries are transferred to Dajia, though it will still be responsible for its existing insurance contracts, the regulator said.