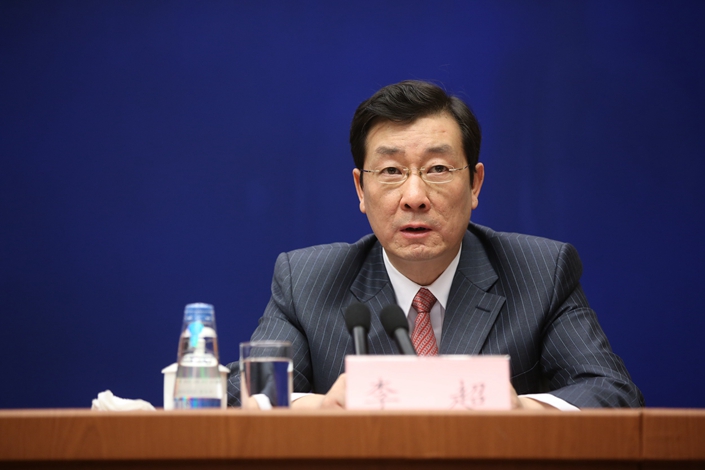 China’s securities regulator and the Shenzhen Stock Exchange have each set up new teams to prepare a widely-expected trial of a registration-based IPO system on the bourse’s Nasdaq-style ChiNext board, Caixin has learned from sources with knowledge of the matter.

This comes months after Shanghai’s new high tech board started operation using a registration-based mechanism, and to some extent reflects competition between Shenzhen and Shanghai, two of China’s largest financial centers.

Earlier this month, the China Securities Regulatory Commission (CSRC) established a team led by CSRC Chairman Yi Huiman to prepare the trial on the ChiNext board, sources close to the regulatory agency said.

The Shenzhen exchange has also formed a task force in charge of the trial, a person close to the bourse said.

A registration-based IPO mechanism is more market-oriented than the approval-based one which is applied to all boards on the Chinese mainland apart from Shanghai’s high tech board. The approval-based IPO mechanism allows the CSRC to vet every application, thus making it unpredictable and prone to corruption because of the power it gives officials to approve or reject applications. It also imposes stringent requirements on companies and gives them little control over the price at which they offer their shares. Approvals can take months or even years.

Shanghai’s high tech board, also known as the STAR Market, is aimed at making the mainland more appealing to tech firms and encouraging them to list at home rather than overseas.

Shenzhen’s ChiNext board and Shanghai’s STAR Market, both of which mostly host tech firms and startups, are in competition with each other. Since President Xi Jinping proposed the establishment of the Shanghai tech board, ChiNext has gradually lost its appeal as more candidates consider Shanghai instead, a broker told Caixin.

A turning point came in August, when Beijing rolled out a plan for promoting bolder reforms in Shenzhen which include applying a registration-based IPO mechanism to the ChiNext board.

On Sunday, CSRC Vice Chairman Li Chao said (link in Chinese) at a conference that the commission will promote reforms to the ChiNext board including a trial of a registration-based IPO mechanism, marking the first time that a CSRC official had publicly mentioned this trial.

Inaugurated in October 2009, the ChiNext board has so far listed 774 companies with a total market capitalization of 5.6 trillion yuan ($790.9 billion), according to data released by the Shenzhen bourse on Monday.

The STAR Market, which officially launched in June and started trading the following month, has listed 34 companies with a combined market capitalization of 530.4 billion yuan, data from the Shanghai bourse shows.

On Monday, the ChiNext board’s average price-to-earnings (PE) ratio was 43.4, lower than the STAR Market’s ratio of 66.8. The difference is due in part to the fact that the STAR Market is not subject to an unofficial cap on the PE ratio imposed on listing candidates — the upper limit has been set at 23 since early 2014 and is informally enforced through “window guidance” to companies seeking a listing on other boards. The aim of the change is to let investors and the market decide on IPO share prices, as in some other countries, rather than regulators.