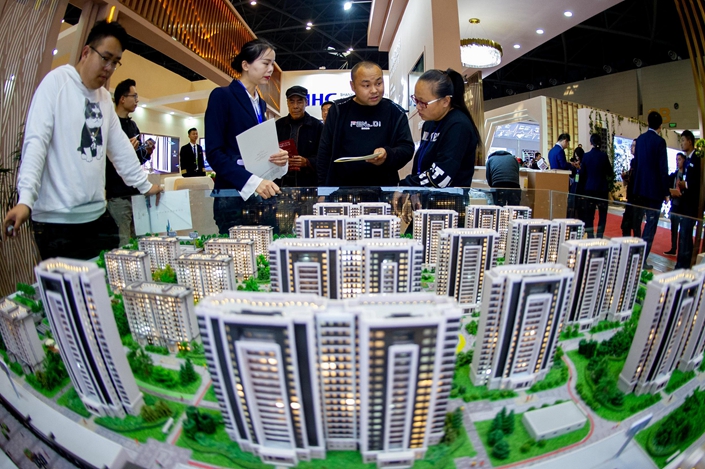 More property developers in China are cutting prices on new homes to boost sales and raise cash amid flagging demand and a tougher environment for debt refinancing.

Sunac China Holdings Ltd., the country’s fourth-biggest real estate group in terms of sales, has reduced prices for properties in a development in Tianjin, a coastal city some 100 kilometers southeast of Beijing, by 30% in the past two months, according to one homeowner who bought his apartment in September. The resident, who declined to be named, said he paid 16,000 yuan ($2,260) a square meter for his property, but the price for apartments in a newly released block has been reduced to 12,000 yuan. Prices for parking spaces have fallen by as much as 50%.

Homeowners are furious and nearly 100 have protested to the company about the cuts. They have refused to accept the developer’s explanation that it had to make the move due to poor sales and feedback from buyers that the layout of apartments was poor, the resident said.

Other developers including China Evergrande Group, China Vanke Co. Ltd. and Country Garden Holdings Co. Ltd., are also offering big discounts in some cities to clear unsold stock. In Zhaoqing, a city in southern Guangdong province, homeowners who bought properties at the original price descended on the sales office of the developer, Evergrande, to demand refunds.

Some developers are not only cutting prices. According to screenshots taken from a chat group that claims to be for employees working for Sunac’s Tianjin unit, the company has told its entire staff to buy unsold properties in order to meet the company’s full-year sales target. They will be allowed to purchase homes at a discount of 15% to 20%, according to the chat group. Sunac refused to comment on the matter when contacted by Caixin.

New home prices in Tianjin declined by 8% in the third quarter, from an average of 16,500 yuan per square meter in June to 15,200 yuan in September, data from China Index Academy, a property research and consultancy firm, show. A source at a property developer in the city told Caixin that in reality the drop has been even greater.

Tianjin is one of Sunac’s most important markets — in 2018, its sales in the city hit 15.9 billion yuan, more than any other developer, according to China Real Estate Information Corp. (CREIC), a property market data and analysis company.

Data from the National Bureau of Statistics show new-home prices in most of the 70 Chinese cities it monitors continue to increase – its survey for September showed month-on-month gains in 53 cities, although that was down from 55 in August and 60 in July. But other surveys show average prices are declining. Prices of new and existing homes in 24 major cities slid 0.12% month-on-month in September, the first decline in 2019, according to the Chinese Academy of Social Sciences, a government-backed think tank.

Developers’ growing thirst for price cuts is a result of tighter cash flow. The government has been tightening administrative controls over property purchases since late 2016 to rein in surging prices, stamp out speculation and make housing more affordable. That’s hurt their sales income which is used to pay back debts and fund new developments.

On the other side, builders are being squeezed by continued controls on their ability to finance and refinance their borrowings. Regulators have told banks to limit lending to property developers and homebuyers. They have also ordered trust companies not to provide new funding to real estate companies and tightened restrictions on developers’ offshore bond offerings.

Sun Hongbin, the chairman of Sunac, said in August that restrictive measures imposed on developers’ fundraising this year has been “unprecedented” and has had a “significant” impact on China’s real estate market.

Interest rates that property developers are having to pay on new bonds they issue averaged 7.03% in the January-September period, 0.5 percentage points higher than for 2018 as a whole, according to data compiled by CREIC. Some companies, including Tahoe Group Co. Ltd. and Kaisa Group Holdings Ltd., are having to pay bond investors as much as 10% to 15%. New loans to property companies by banks rose by 9.1%, 0.7 percentage points lower than that in the first eight months, according to data from China Index Academy.

Given the declining pressure facing the real estate market some “periodic fluctuation” in prices is normal, a source in Sunac told Caixin. He compared the current situation to that in 2014 when home prices also fell, and said the government stimulus measures after 2014 resulted in an oversupply that is now being compounded by weak demand.