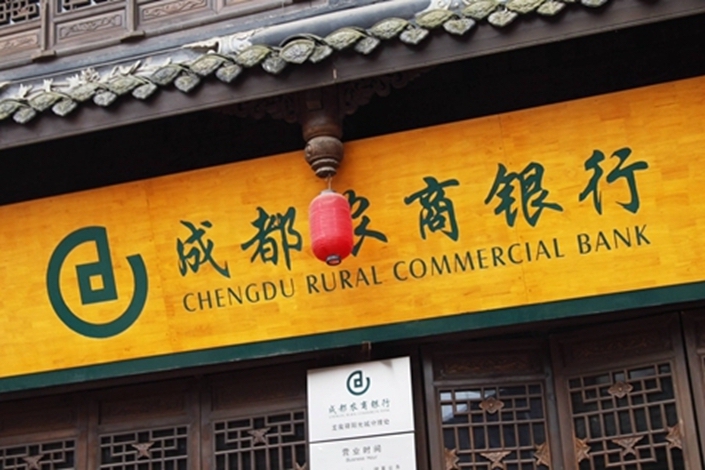 New interim chairman of Chengdu Rural Commercial Bank says he expects the bank to post a record profit for 2019.

Chengdu Rural Commercial Bank Co. Ltd. is replacing its chairman as controlling shareholder Anbang Insurance Group Co. Ltd. puts its stake in the regional bank up for sale. The bank played a key role in financing an overseas acquisition spree before Anbang’s collapse and takeover by the government.

Chen Ping resigned as chairman of the bank as his employment contract expired, Caixin learned from exclusive sources. The China Banking and Insurance Regulatory Commission (CBIRC) working group in charge of the takeover of Anbang named Xie Shaobo as interim chairman. Xie, currently an executive at Ping An Bank, was appointed by the CBIRC last year to monitor Chengdu bank’s risk.

Since the government took over Anbang last year amid a fraud investigation into founder and former Chairman Wu Xiaohui, the regulator has been trying to sell off the fallen financial giant’s assets, including the stake in the Chengdu bank.

Chengdu Rural Commercial Bank was a major contributor to Anbang’s consolidated assets and an important funding tool for its foreign acquisitions. The government team now in charge of running Anbang found a host of murky entanglements between Anbang and Chengdu Rural Commercial Bank in connection with Anbang’s overseas asset purchases, Caixin learned from sources with knowledge of the matter.

On Tuesday, interim Chairman Xi at the bank’s annual meeting announced a delay in releasing the bank’s 2018 annual report, citing efforts to deal with the bank’s equity ownership relations with Anbang, Caixin learned from sources.

The bank’s inter-bank business has declined, but liquidity has remained stable and above regulatory requirements, Xie disclosed at the meeting, according to the sources.

Anbang tried to sell the 35% stake it directly owns in the bank for 16.8 billion yuan but failed to reach a deal.

In December, Anbang resumed its efforts to sell the full 55.5% stake in the bank. Anbang plans to sell the 5.55 billion shares, including those held by related companies, for nearly 26.2 billion yuan, according to a post published Monday on the Beijing Financial Assets Exchange (BFAE).

The post shows Anbang selling its own 3.5 billion shares plus 2.05 billion shares put up for sale by Anbang’s regulatory restructuring team and owned by 10 other shareholders that are actually controlled by Anbang, sources told Caixin.

Former Chairman Chen, 54, came from the same home town as Anbang founder Wu, who was sentenced to 18 years in prison for fundraising fraud and embezzlement in May 2018.

When Wu showed interest in investing in the bank in 2010, Chen was the contact person at Anbang to negotiate with the bank’s then-Chairman Fu Zuoyong, who was placed under corruption investigation in December in relation to a fallen senior provincial official.