By Flynn Murphy and Sun Liangzi 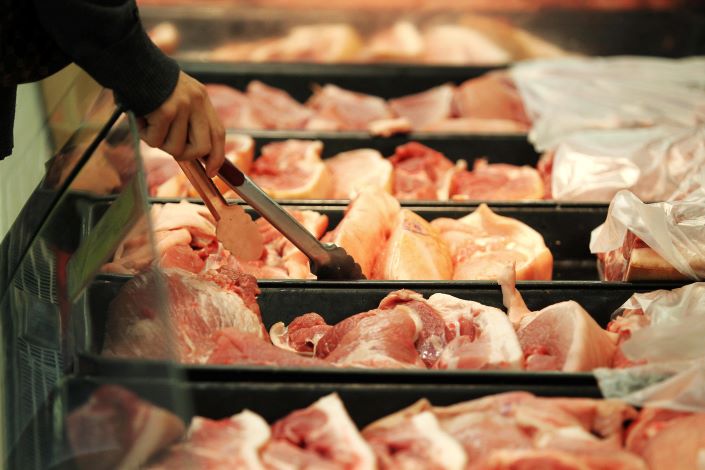 Food prices in China were up 17.4% year-on-year in December, with pork responsible for most of the increase, according to government statistics.

China released 30,000 tons of pork from national strategic reserves on Friday, in the latest effort to ensure the country can afford to keep pork on the menu over the Lunar New Year holiday after African swine fever caused the meat’s price to more than double.

China’s central government and a handful of provinces hold substantial reserves of frozen pork and live hogs in freezers and farms around the country. While too small to guarantee supply — based on Caixin calculations, China chomps through more than 30,000 tons every six hours — they are released in small amounts to put downward pressure on prices.

In Henan province, where several thousand tons have already been released onto the market this month from local reserves, the provincial economic planner — the Development and Reform Commission — said prices had dropped between 15% and 20%. Similar effects were observed in Northeast China’s Heilongjiang province.

Including the latest release, the central authorities have released some 80,000 tons of their own pork so far this year as the country heads toward an early Lunar New Year at the end of January.

Food prices in China were up 17.4% year-on-year in December with pork responsible for most of the increase, according to the National Bureau of Statistics (NBS). Prices of the popular meat soared 97% year-on-year and accounted for just over half the overall CPI increase of 4.5%. But that surge was down from a year-on-year pace of 110.2% in November.

Pressure on pork supplies is easing somewhat as a result of policies to boost imports, release reserves and encourage farmers to raise hogs. Average prices fell 5.6% in December, compared with a 3.8% rise the previous month.

But while the release of the meat in dribs and drabs from reserves around the country does seem to be helping mitigate the price squeeze caused by the national outbreak of African swine fever, analysts say it’s no long-term fix.

Since it was first reported in China in the summer of 2018, the deadly pig disease is believed to have killed as many as half of the country’s hogs and cut pork production by as much as 30%, causing more than 1 trillion yuan ($145 billion) of direct losses.

China ramped up pork imports by 75% last year in an effort to shore up supply, bringing in 2.1 million tons of the meat, according to the country’s customs authority.

Pork prices have nevertheless remained high. On Jan. 16, China’s Ministry of Agriculture and Rural Affairs said the average pork price at the national agricultural wholesale market was 46.82 yuan per kilogram, more than double what it was before swine fever hit.

Despite official assurances that prices can be controlled in the lead up to the weeklong national holiday, one pig farming professional told Caixin that consumer demand for fresh, as opposed to frozen pork, to put on dinner tables over Lunar New Year meant their efforts could be in vain.

A plan proposed by the agriculture ministry will aim to return the country to 80% of its pre-swine fever production capacity by the end of 2020.