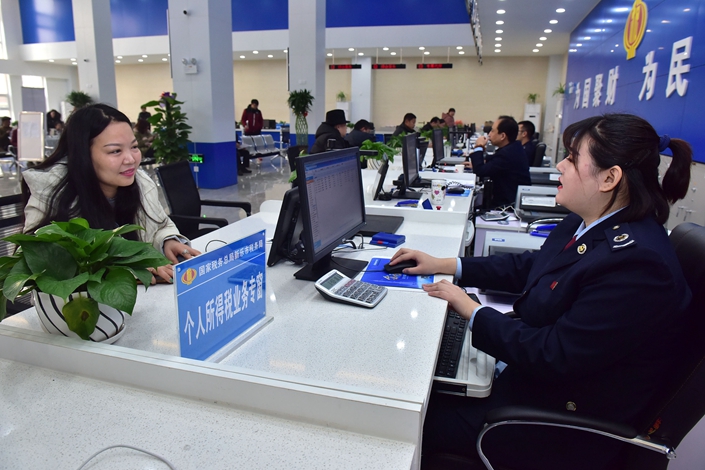 China’s Ministry of Finance has scrapped one of the metrics it uses to evaluate local governments on their fiscal management, the latest move to ease pressure on officials as tax and fee cuts bite into fiscal revenue.

The ministry has abolished the criteria of “fiscal revenue quality” previously applied to provincial-level governments and some cities from a scorecard of seven benchmarks, according to a regulation (link in Chinese) published Sunday. “Fiscal revenue quality” refers to the proportion of tax receipts in total fiscal income and the higher their share, the higher the quality. The metric was partly aimed at discouraging local governments from boosting fiscal income through big land sales and unreasonable or illegal fees imposed on companies.

Growth in tax revenue has slumped over the past two years as the pace of economic expansion slowed and the central government implemented substantial tax and fee cuts, making it harder for local governments to meet the “fiscal revenue quality” requirement.

The cuts for the whole of 2019 are likely to surpass 2 trillion yuan, accounting for more than 2% of the country’s gross domestic product, Finance Minister Liu Kun said in a report to lawmakers in December. Data (link in Chinese) from the Ministry of Finance show that growth in tax revenue slumped to 0.5% in the first 11 months of 2019 from 9.5% in the year-earlier period. Overall fiscal revenue rose just 3.8% in the first 11 months, compared with 6.5% a year earlier.

Liu also warned that tax and fee cuts had bitten into government revenue and social insurance fund revenue in some regions. Many local governments collected less revenue than planned last year, a Caixin review of official data show. Shanghai municipality, East China’s Shandong province and the northeastern province of Liaoning all missed their revenue targets in 2019, collecting 0.8%, 0.6% and 1.4% more revenue than the previous year respectively, despite setting targets for growth of 5%, 5% and 6.5%. The Liaoning government said that if it were not for tax and fee cuts, it would have booked a revenue increase of 11.9%. In 2019, the province’s tax and fee cuts amounted to nearly 70 billion yuan, equivalent to around one-third of its 2018 tax revenue of 197.6 billion yuan.

Some local governments expect lower revenue this year. Of the 18 provincial-level governments that have announced their fiscal revenue forecast in 2020, 12 have set lower goals than those made at the beginning of 2019. Beijing and Shanghai expect zero growth in fiscal revenue.

But local governments aren’t completely off the hook. Although the “fiscal revenue quality” metric has been scrapped, there are still six other evaluation criteria which have been given more weight in the overall scorecard. The 15 points (link in Chinese) allocated to “fiscal revenue quality” have been redistributed to five of the six other indicators which include implementation of the fiscal budget, management of funds allocated from the central treasury, and disclosure of budgetary information. The 10 provincial-level governments with the highest points at the end of the year are awarded prizes

Local governments have been scrambling to make up their revenue shortfalls with other revenue sources, such as selling state-owned assets and creaming off more profits from state-owned enterprises. Finance ministry data show that nontax revenue jumped 25.4% year-on-year in the first 11 months, compared with a 9.1% decline over the same period in 2018.

In an effort to ease the pain, the central government has boosted fiscal transfers. In 2019 transfers amounted to 7.54 trillion yuan, an increase of 9 percent over the previous year, the biggest in recent years, Liu said in December.

The government has also extended a 2016 initiative allocating provincial-level governments around 50% of the country’s value-added tax (VAT) revenue — the biggest source of tax income. Previously, localities were given only around 25% of VAT revenue, with the central government taking the rest.