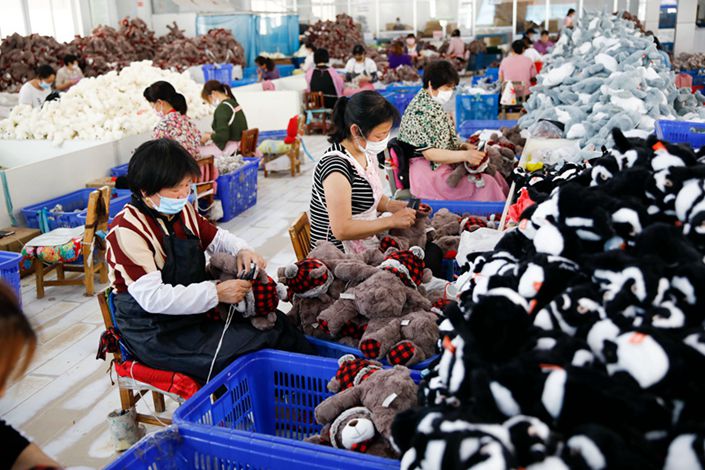 In the decade since joining the World Trade Organization in December 2001, China’s share of global merchandise exports surged from 4.3% in 2001 to 10.7% in 2011, according to World Trade Organization (WTO) data. But since then, the figure has climbed only slowly. In addition to this structural shift, China has been hit by the perfect storm of slowing global growth, trade tensions with the U.S., deglobalization and now the fallout from the Covid-19 pandemic.

The world’s biggest exporting nation recorded a 6.2% drop in overseas sales in the first six months of this year as the global economy ground to a halt amid the coronavirus pandemic. The WTO projected in June that even under a relatively optimistic scenario, the volume of world merchandise trade in 2020 would contract by 13%.

Recognizing that the days of 20% plus export growth are over, the government dusted off an initiative it tried in 2009 during the global financial crisis – encouraging foreign trade companies to change strategy and switch their focus to the country’s 1.4 billion consumers. However, such a shift in strategy is not an easy task.

China’s central government is pushing local governments to issue the remaining 1.51 trillion yuan ($220 billion) of new special-purpose bonds that are intended to spur the economy by the end of October — and they can’t use the borrowings for just any old thing.

In a notice issued Wednesday, the Ministry of Finance published a list for how the money from special bonds can’t be used. The negative list includes replacing existing debt, funding white elephant projects, paying wages and pensions, buying land and investing in real estate projects.

The document reiterates that the funds from new special bonds must be used for public welfare projects that generate income. The amount of financing should be balanced against expected revenue.

A Beijing government-owned capital management firm has been forced to scale back a planned 4 billion yuan ($571 million) bond sale aimed at repaying the borrowings of a heavily indebted subsidiary after investors gave the issue a cool reception.

Beijing Haidian District State-owned Capital Management Center (Haidian SCMC), reduced the size of the five-year 3.8% bond sale to 1 billion yuan, sources close to the matter told Caixin. The company had originally scheduled the issue earlier in July but failed to complete the sale, citing “market volatility.” It revived the issue this week and bookbuilding was due to start Wednesday, but multiple investors received a cancellation notice from the underwriters later that evening.

Chinese carmaker Li Auto Inc. raised $1.1 billion in an above-range U.S. initial public offering, adding to the market focus on electric-vehicle companies, according to terms of the deal reviewed by Bloomberg.

Li Auto sold 95 million American depositary shares for $11.50 each on Wednesday after marketing them for $8 to $10. The Beijing-based company is valued in the listing at about $10 billion fully diluted, based on a calculation by Bloomberg. A representative for Li Auto declined to comment. The company joins other electric-vehicle makers in tapping the U.S. capital market. Li Xiang, the founder, chairman and chief executive officer of Li Auto, will own 21% of the company, representing 72.7% of the total voting power, according to the filing.

India tightened restrictions on Chinese companies seeking to supply goods or services to the government, expanding its economic retaliation against Beijing over a border conflict in the Himalayas.

Procurement regulations revised last week now require businesses in countries that share a land border with India to register with the relevant authorities and receive permission from the external affairs and home affairs ministries before bidding for contracts. This applies to a broad range of public-sector business, including state governments, state-run businesses and banks, and public-private partnerships.

Though India borders China, Nepal, Bhutan, Pakistan, Bangladesh and Myanmar, exemptions in effect limit the scope of the rules to China and Pakistan, of which only China would realistically be involved in government procurement.

Revenue excluding certain items will be $5.5 billion to $6.3 billion in the period ending in September, the San Diego-based company said Wednesday in a statement. Including back payments from Huawei, sales will be $7.3 billion to $8.1 billion, the company said.

Qualcomm is unique in the chip industry because it gets the bulk of its profit from licensing patents. The reach of its intellectual property and the profits they generate have attracted legal and regulatory challenges around the world. Most have been settled and with the “long-term” agreement reached this month with Huawei, Qualcomm said it has signed up all major phone makers to license its patents.

COSMOPlat, an industrial internet platform developed by Haier Group, has inched a step closer to a potential public listing after the Chinese home-appliance giant announced a change to the unit’s shareholding structure. If the restructuring results in a listing as many expect, COSMOPlat will become Haier Group’s fifth publicly listed units in addition to one listed in Hong Kong and three on the Chinese mainland.

On Thursday, Haier Smart Home Co. Ltd., the group’s Shanghai-listed unit whose business mainly includes selling white goods products such as refrigerators, announced (link in Chinese) it would sell a 54.5% stake for 4 billion yuan ($571 million) to an investment company linked to Haier Group. After the deal, Haier Smart Home will still retain 18.75% of COSMOPlat but will no longer incorporate the unit’s businesses into its financial reporting, according to the statement.

During the three months through June, the Chinese company shipped 55.8 million devices, down 5% year-on-year. Samsung came in second with 53.7 million smartphones, falling a steep 30% from the same period last year. Huawei’s top-ranking performance marks the first quarter in nine years that a company other than Samsung or Apple has led the market. However, it could be challenging for Huawei to keep this title. The U.S. sanctions that strip the company’s access to Google services for its phones have forced it to pivot toward the Chinese market.

The company announced a 69.5% year-on-year drop in profit in the three months ended May 31 to $13.2 million, while revenue decreased 5.3% to $798.5 million. The number of students enrolled in its tutoring programs and test preparation courses — many of which prepare students to enroll in universities overseas — shrank by 6.2%, according to the financial report released Tuesday. New Oriental said it hopes to step up its K-12 after-school online tutoring to expand its student pool and leverage the growing market in China’s smaller cities.