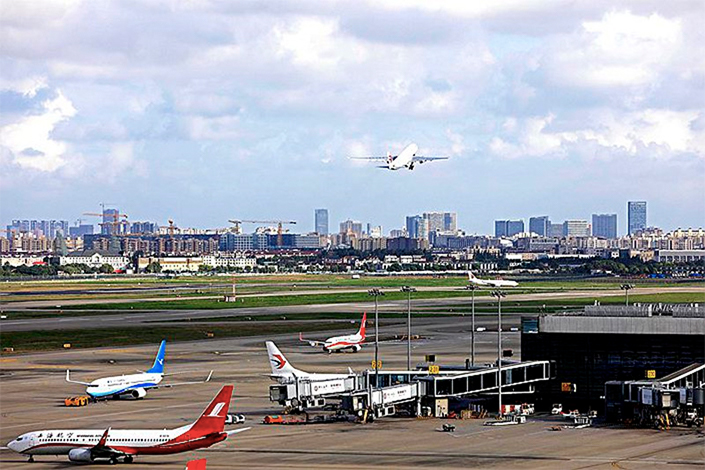 A flight takes off from Shanghai Hongqiao International Airport on May 18.

China has relaxed entry restrictions for some European countries’ citizens with valid residence permits, offering a route back into the country for thousands of people displaced by border closures and canceled flights amid the coronavirus pandemic.

Passport holders from 36 European nations, including Germany, France and the U.K., will be allowed to apply for a Chinese visa “free of charge” without an invitation letter, according to a notice (link in German) published Wednesday by the Chinese embassy in Berlin.

As the coronavirus spread worldwide in March, China shut its borders to foreign citizens and even denied entry to those with valid work or residence permits or family living in the country, leaving thousands of people stranded.

The abrupt departure of the investment head of California’s mammoth state pension fund last week after months of controversy over his China background and his ethics triggered pressure from the state’s financial chief demanding an inquiry.

California State Controller Betty Yee, who oversees the state's finances, wrote to Calpers Board President Henry Jones Monday requesting a “swift and thorough inquiry” into Meng’s departure to determine whether any laws were violated or whether the pension system suffered “financial and reputational damage.”

A fifth local lender looks set to join a regional banking merger in the northern province of Shanxi as part of an ongoing cleanup of smaller financial institutions across the country.

The bank merger in Shanxi appears to have been driven by a multibillion yuan corruption scandal uncovered at the Shanxi Rural Credit Union that may have had an impact on those particular lenders, sources close to the matter told Caixin. More than 10 executives at the five city commercial banks have been taken away for investigation, one source said.

The Turkey Wealth Fund is looking to China for investment in a number of major infrastructure projects, according to CEO Zafer Sonmez.

TWF was established in 2016 as the national sovereign wealth fund and is chaired by President Recep Tayyip Erdogan. As of the end of 2018, it had $223 billion in assets, including $33 billion in equity. The fund is looking for foreign and local partners and aims to hit $100 billion in equity value by 2023.

Sonmez told the Nikkei Asian Review of plans to tie Turkey into China’s Belt and Road Initiative much more deeply by “creating platforms and institutions that can team up with Chinese institutions.” In his view, Turkey is “unfortunately lagging behind” on the Chinese initiative when it could be a key player.

Hong Kong- and Shenzhen-listed brokerage GF Securities Co. Ltd. (GF) chose a new Communist Party chief, Caixin learned, as the company continues to shake up its management in the wake of a client’s $12.6 billion financial fraud.

Zhou Xitai, a former party committee member of Huazheng Asset Management Co. Ltd., left the state-owned asset manager earlier this year and is set to take over as GF’s top political official, sources with knowledge of the matter told Caixin. Zhou, 52, previously worked for the China Securities Regulatory Commission (CSRC) for more than a decade. He later joined the CSRC’s Securities Regulatory Commissioner Office in the southern city of Shenzhen in April 2015.

ByteDance in talks with Indian conglomerate over TikTok amid layoff fears

ByteDance approached Mumbai-headquartered Reliance Industries Ltd. for potential investment in TikTok’s operations in India, where the Chinese tech giant is struggling to retain key employees following a ban on the hugely popular short video app, according to a report by U.S. tech news provider TechCrunch.

ByteDance is also under pressure from the Trump administration to sell TikTok’s U.S. business for a chance to continue to operate there, with software giant Microsoft and social media platform Twitter being potential purchasers.

ByteDance and Reliance began conversations late last month and have yet to reach a deal, two unnamed sources told TechCrunch. They said TikTok’s Indian business is being valued at more than $3 billion.

Global PC giant Lenovo Group Ltd. logged a return to solid profit and revenue growth in its latest reporting quarter as the company and its peers benefited from strong demand from people working and studying at home during the Covid-19 outbreak.

Beijing-based Lenovo reported revenue rose 7% year-on-year to $13.3 billion in the three months ended in June, bouncing back from a 10% revenue decline in its previous quarter, according to the financial report published Thursday. Similarly, profit for the latest quarter rose 31% to $213 million, reversing a 64% decline the previous quarter. Revenue for the company’s core PC and smart-device unit, which accounted for 80% of the total, grew 10% to $10.6 billion during the quarter.

China’s days as world’s factory are over, iPhone maker says

A key supplier to Apple Inc. and a dozen other tech giants plans to split its supply chain between the Chinese market and the U.S., declaring that China’s time as factory to the world is finished because of the trade war.

Hon Hai Precision Industry Co. Chairman Young Liu said it’s gradually adding more capacity outside of China, the main base of production for gadgets from iPhones to Dell desktops and Nintendo Switches. The proportion outside the country is now at 30%, up from 25% last June. That ratio will rise as the company — also known as Foxconn — moves more manufacturing to Southeast Asia and other regions to avoid escalating tariffs on Chinese-made goods headed to U.S. markets, Liu told reporters after his company reported financial results.

The move is the latest example of China’s attempts to climb the value chain in the global semiconductor industry, where its companies are still playing catch-up with foreign competitors. The market for DDICs, the key component behind the quality of display panels that form the backbone of modern electronic products, is dominated by two South Korea-based manufacturers — Samsung Display Co. Ltd. and MagnaChip Semiconductor Corp. — which together had an 89% global share in the first quarter of 2019, according to research firm IHS Markit.

Huawei vows to whack cost of lidar on self-driving cars

Cathay shares rise most since 2008 on mainland reopening report