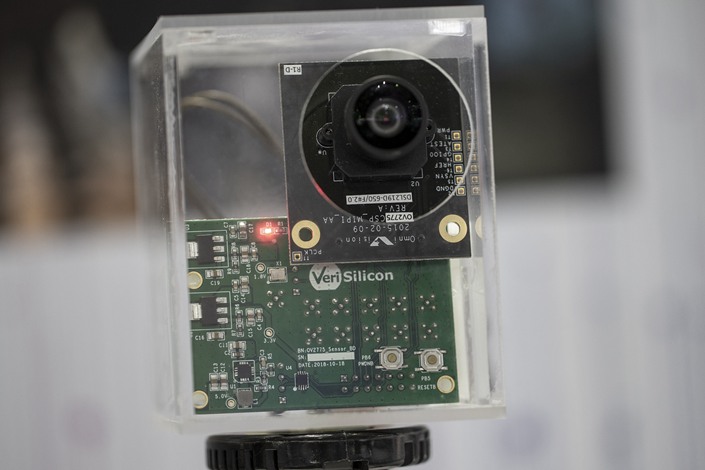 The Shanghai-based company’s shares were down 13% at the end of trading on the city’s Nasdaq-like STAR Market Thursday, but the closing price of 128 yuan ($18.51) was up 232% from its offering price on continued strong investor interest.

That sentiment has been a boon for the dozens of semiconductor companies that have recently listed on the STAR Market. Two of the highest-profile companies to ride this wave so far are Semiconductor Manufacturing International Corp. and Cambricon Technologies, both of which made strong debuts last month.

Overseas investors put more money into stocks in Shenzhen than in Shanghai in the first half of this year, according to stock exchange data, indicating investors saw the tech-heavy bourse as a more favorable destination during China’s Covid-19 outbreak.

The average daily value of Chinese mainland-listed shares changing hands via the Shenzhen-Hong Kong stock connect program more than doubled in the first half from the same period in 2019, reaching 42.7 billion yuan ($6.2 billion), according to interim financial results released Wednesday by Hong Kong Exchanges and Clearing Ltd. (HKEx).

The total surpassed the 31.6 billion yuan traded via the Shanghai-Hong Kong stock connect program over the same period, according to HKEx, which runs the Hong Kong Stock Exchange. It was the second time that the half-year figure for Shenzhen exceeded the one for Shanghai since the Shenzhen-Hong Kong stock connect program was launched in December 2016. The first time was in the second half of 2019.

China and the U.S. agreed to have a call soon to discuss the progress of their trade deal, according to the commerce ministry in Beijing.

The two nations will be in touch in the near term, spokesman Gao Feng said Thursday in Beijing when asked whether a meeting to review progress on the phase one trade agreement would take place. Gao didn’t cite an exact date or elaborate. The two sides were expected to talk last weekend in a review scheduled for six months after the trade deal went into effect.

Cui Tiankai: China is not waiting on the U.S. presidential election

A sell-off in bonds issued by Brilliance Auto Group Holdings Co. Ltd. revealed investor concern over the state-owned carmaker’s growing financial strain after it agreed to sell down its stake in a lucrative joint venture to partner BMW AG.

Several of Brilliance’s bonds slumped Aug. 12 after some bondholders sold off the debt. Prices of two bonds traded on the Shanghai Stock Exchange plummeted more than 20% during the day, which led to trading halts. On Friday, the price of one of the company’s bonds fell to 26 yuan ($3.70), 69% lower than the estimated price the previous day reported by bond clearing house China Central Depository and Clearing Co. Ltd.

The main cause of the sell-off is a 70 million yuan legal dispute between Brilliance and one of its bond underwriters, Tianfeng Securities Co. Ltd., the executive told Caixin. Also, market rumors have spread that Brilliance has run into operational problems.

Hong Kong Exchanges & Clearing Ltd. posted a 1% profit gain, benefiting from a spate of high-profile Chinese stock listings and a pick-up in trading as the pandemic and political tensions stoked volatility.

First-half net income rose to a record HK$5.23 billion ($674 million), on the back of a 13% gain in core revenue, the exchange said Wednesday. Investments slumped 45% in the period, dragging down the result. Investors have been flocking to the bourse this year, propelling its share price up by almost 50%. A number of Chinese technology enterprises have floated shares in the city amid concern over their U.S. listings. Stock trading jumped 33% in the first half, helped by an increase in inflows from the mainland.

As tensions flare over China’s threat to impose trade penalties on allegedly dumped Australian wine, The Australian Financial Review learned that Frydenberg’s officials earlier told the Chinese-backed bidder for the Australian-based, Japanese-owned dairy and drinks manufacturer he had no plans to approve the sale, nine months after the bid was launched.

There is no agricultural land involved in the China Mengniu Dairy-Lion deal. The competition regulator approved it in February; farmers generally support the investment; and the Hong Kong-listed bidder last year cleared a national security test and received Frydenberg’s approval to acquire organic infant formula Bellamy’s Australia for $1.5 billion.

TikTok’s Chinese owner is proposing to settle consumer privacy litigation that has exposed it to hundreds of millions of dollars in damages as the video-streaming app prepares for a possible acquisition under threat of being shut down in the U.S. over national security concerns.

Lawyers for ByteDance Ltd. and consumers “reached a settlement in principle, subject to certain conditions,” to resolve claims that the app unlawfully records facial-scan images of children and sends confidential information about adult users to China, according to a filing in Chicago federal court. The attorneys said they plan to file a final settlement proposal within 90 days. But there’s a wrinkle: The deal could be scuttled because attorneys representing consumers in California are complaining that they were left out of the settlement talks.

As tensions grow between China and Australia, the superpower’s main coal supplier, work is being stepped up in Pakistan’s largest coalfield on a project conceived to feed local power plants. But some experts say it might provide Beijing an option for an alternative source of coal.

After months of delay amid the Covid-19 pandemic, 500 employees of Shanghai Electric Power arrived in Pakistan earlier this month to work on the $1.9 billion Thar Block-I integrated coal mine and power project located in the country’s southeastern desert region of Tharparkar. Wholly owned by China, the project is a key component in the $50 billion China-Pakistan Economic Corridor (CPEC), itself a significant part of Chinese President Xi Jinping’s flagship Belt and Road Initiative.

Chinese scientists have found key proteins in the blood of Alzheimer’s sufferers which they say could act as predictive biomarkers for early diagnosis and treatment about five to seven years in advance of symptoms appearing and at a relatively low cost.

In research published in the journal Alzheimer’s & Dementia last Thursday, a team at Beijing’s Xuanwu Hospital, Capital Medical University, found that changes in four exosomal synaptic proteins in blood can be used to detect preclinical Alzheimer’s disease five to seven years before symptoms of cognitive impairment are displayed.

Alzheimer’s disease is the most common type of dementia, which slowly and gradually destroys memory, thinking skills and eventually the ability to carry out simple tasks. Currently, there is no cure for this devastating disease, according to the U.S. National Institute on Aging.