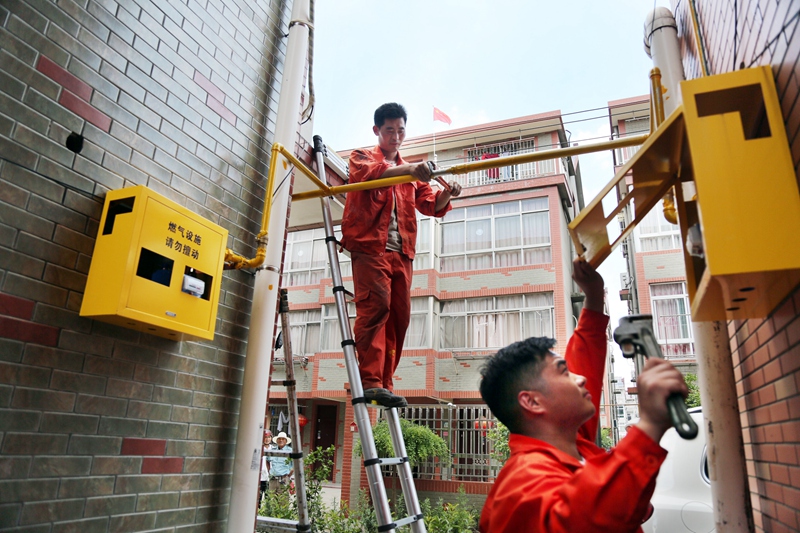 A rule-defying pipeline highlights how energy markets are shifting in the wake of a vast national reorganization of state assets.

In the industrial Henan province city of Jiaozuo, a new 1.4-mile natural gas pipeline will soon be up and running, supplying the city’s biggest company with the fuel it needs to churn out more titanium.

The only problem is that the pipeline hasn’t been granted official approval to operate, as the local pipeline monopoly was auctioned off nearly two decades ago. Indeed, construction on the project was never given the green light.

This case highlights the situation in the country’s energy market in the wake of a vast national reorganization of pipeline assets, which has led to energy giants stepping onto the turf of their middleman partners as local business and official interests clash.

China’s manufacturing activity continued its rapid expansion in August as the economy recovered further from the fallout of the Covid-19 pandemic, with gauges for overseas demand and employment showing improvement.

The Caixin China General Manufacturing Purchasing Managers’ Index (PMI), which gives an independent snapshot of the country’s manufacturing sector, rose to 53.1 last month from 52.8 in July, reaching a high unseen since the start of 2011 and remaining in expansionary territory for the fourth month in a row, a report released Tuesday showed. Readings greater than 50 signal growth.

The index’s performance suggests that the sector’s recovery may retain strong momentum going into the later months of 2020 as policymakers throw support behind manufacturing as a way to offset the pandemic’s impact and achieve policy goals around high-tech self-sufficiency.

A surge in China’s yuan to a more than one-year high is testing the central bank’s appetite for currency strength.

The yuan jumped as much as 0.46% to 6.8168 to the U.S. dollar, the strongest level since May 2019 as the dollar traded at a two-year low. The Chinese currency traded up 0.38% as of 2:15 p.m. in Shanghai. The advance came even after the central bank set its daily fixing for the currency at levels weaker than traders and analysts had expected for three sessions through Monday. Those moves could be taken as a sign that Beijing hoped to slow the rally.

China’s currency has climbed more than 5% from this year’s nadir in May, the best performance in Asia. A strong yuan is an obstacle when the nation’s economy is recovering from the coronavirus pandemic and confronted with escalating tensions with the U.S. because it could undermine the attractiveness of exports.

Bank of China, one of the country's big four state-owned banks, reported a record 11.5% drop in first-half net profit as it almost doubled the amount set aside to cover loan losses in the aftermath of the pandemic. Officials projected more credit risks in the second half.

In the first half, the state-owned lender deducted 66.5 billion yuan ($9.69 billion) from profits to add to reserves against impairment losses, the biggest increase among the big four state-owned banks. Bank of China joined a list of banks that have set aside more funds to counter expected losses on rising bad loans following the Covid-19 pandemic.

Bank of China reported a net first-half profit of 100.9 billion yuan ($14.74 billion), down from 114.05 billion yuan a year earlier. Revenue increased 3.24% to 285.7 billion yuan. Among listed banks that have reported earnings, Bank of China’s year-on-year profit decline was the second-biggest, behind a 14.26% drop at state-owned Bank of Communications.

Soybean futures in Chicago advanced for the sixth day to the highest level since June 2018 on strong demand from China, worries about deteriorating U.S. crop conditions and a weakening dollar. Corn futures climbed to the strongest since March, while wheat was near the highest since April.

China has stepped up purchases of U.S. farm goods since the end of April, with soybean sales for delivery next season currently running at their highest level for this time of year since 2013. The country has also set several daily records for corn purchases and is on course to exceed for the first time an annual quota set by the World Trade Organization. China’s buying of hard red winter wheat has been expanding too.

The U.S.-listed, Shanghai-based enterprise sold 88.5 million American depositary receipts at $17 apiece, according to a statement emailed Monday. It initially planned to sell only 75 million shares. Investors are showing an increased interest in clean-energy car companies.

The $1.5 billion raised in Nio’s latest offering will be partly used to increase the company’s interest in Nio China. Funds will also be spent on R&D into autonomous driving technologies as well as other general corporate purposes. Morgan Stanley, China International Capital Corp. and BofA Securities Inc. underwrote the offering.

In the six months through June, Gree sold 41 billion yuan ($6 billion) of air conditioner products compared with Midea’s 64 billion yuan, according to data from the companies’ semi-annual earnings the reports released (link in Chinese) Monday.

It was the first time in at least two decades that Gree lost market crown in air conditioning. With both companies based in South China’s Guangdong province, Gree makes most of its revenue from selling air conditioners, but Midea has a more diversified set of businesses, including an industrial-robot manufacturing unit.

The University of North Texas terminated its exchange program consisting of 15 visiting researchers from China who were working at the university on Chinese government funding, according to local media reports on Monday.

The termination, which appears to be the first such case of an American university cutting ties with a Chinese national scholarship fund, effectively ended those researchers’ ability to remain in the country. The researchers were notified of the termination on Wednesday in a letter signed by Jennifer Cowley, the university provost and vice president for academic affairs, and Mark McLellan, vice president for research and innovation, the Denton Record-Chronicle reported. It was not immediately clear why those Chinese researchers were expelled from the university. The university did not elaborate.

Chinese bottled water producer Nongfu Spring will raise HK$8.35 billion ($1.08 billion) in its Hong Kong initial public offering (IPO) after pricing its shares at HK$21.50 each, according to people close to the company’s board.

The price is at the top of a range the company suggested last week. At this price, the company will be valued at more than HK$240 billion ($31 billion). Nongfu is offering 388.2 million shares, 7% of which will be sold in Hong Kong and 93% on the global market. Six cornerstone investors led by U.S. fund manager Fidelity, New York hedge fund Coatue and Singapore sovereign wealth fund GIC, have subscribed for a total of 115 million shares. Nongfu will start trading Sept. 8 on the Hong Kong Stock Exchange.