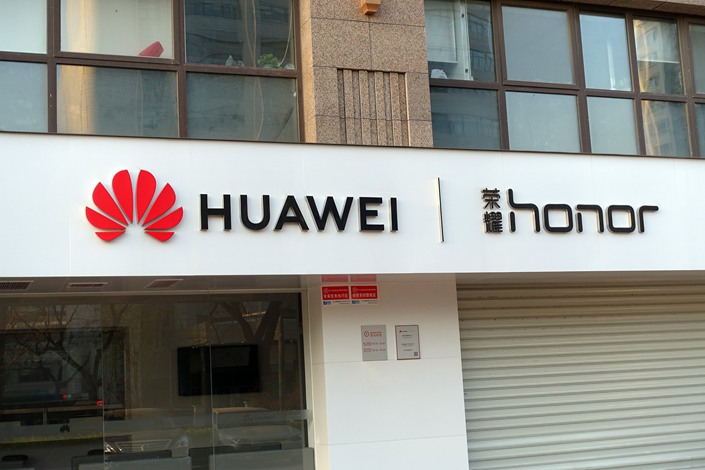 A consortium of more than 30 agents and retailers will buy budget smartphone brand Honor from sanctioned Chinese tech giant Huawei Technologies Co. Ltd. for an undisclosed amount in what they described as an attempt to “save Honor’s industry chain.”

The telecommunications equipment giant signed an agreement to sell all of Honor’s business assets to a new company called Shenzhen Zhixin New Information Technology Co. Ltd. The company was founded in September by the consortium partners and companies affiliated with Huawei’s hometown government of Shenzhen, according to the purchasing group’s joint statement issued Tuesday.

The deal follows the “persistent unavailability of technical elements needed for smartphone business” and “tremendous pressure on (its) consumer businesses,” according to Huawei (link in Chinese). The company said it will not hold any stake in the new Honor company and will not participate in its operations, management and decision-making activities.

A top Chinese chipmaker and a major car manufacturer disclosed debt defaults Monday, expanding a list of distressed state-linked enterprises that have roiled the country’s credit market in recent days.

Uncertainty has been growing over Beijing’s willingness to support state-linked businesses struggling to manage their debt loads in recent weeks. The unexpected default of a Chinese coal mining company prompted particular concern over the health of these enterprises and their lenders, triggering a selloff in bonds issued by weaker borrowers from the sector and prompting some of them to cancel debt sales.

Paulson calls for new round of U.S.-China talks

“We’ll need to deal with structural and process issues that include services, not just goods,” he said. “The agreement should be done in phases with regular deliverables, beginning with easier issues that build momentum to tackle the tough ones.”

Paulson, a former Goldman Sachs CEO who led the Treasury during the George W. Bush administration, also called for a shift away from what he called “reflexive reciprocity” to “targeted reciprocity” to ensure that the strategic competition between the world’s two largest economies won’t result in the U.S. closing itself off to the world.

A planned $3 billion blockchain bond listing in Malaysia arranged by one of China’s “Big Four” state-owned commercial banks was suspended just days after it was announced.

The issuance of the “first publicly listed debt security on a blockchain” will be delayed indefinitely, according to a Friday statement from the Fusang Exchange located on the Malaysian island financial hub of Labuan. The statement gave no reason for the delay.

Trading of the bond was scheduled to begin on the bourse Friday, with the Labuan branch of China Construction Bank Corp. (CCB), China and the world’s second- largest bank by assets, acting as the lead arranger and listing sponsor for the deal, according to the bond prospectus.

When will Ant Group’s IPO be rescheduled? Regulator says it ‘depends’

China Securities Regulatory Commission (CSRC) Vice Chairman Fang Xinghai said that when Ant Group Co. Ltd. will list “depends on how the government restructures our regulatory framework in terms of financial technology and also depends on how the company reacts to the changing regulatory requirements.”

Fang made the comments Tuesday morning at the Bloomberg New Economy Forum. The abrupt suspension of Ant Group’s potentially record-shattering $34.5 billion IPO in Shanghai and Hong Kong earlier this month sent shock waves through the fintech industry, as China is poised to lay out a stricter regulatory framework. The ripples are expected to spread far beyond Ant Group and affect other fintech companies weighing IPOs.

The logistics arm of China’s No. 2 e-commerce company JD.com Inc. embarked on a new hiring spree for an air cargo unit set to be based in the city of Nantong near Shanghai, Caixin learned, as it moves to further expand its transport capabilities.

Recent recruitment information seen by Caixin showed that JD Logistics was looking to fill more than 30 positions in roles including aircraft reception, flight training, aviation materials management and aircraft maintenance. But the listings were deleted shortly after being posted, and JD Logistics had no comment on the situation.

JD Logistics is just one of several major units that the e-commerce giant has broken out for operation as separate companies. Among the units, JD.com founder Richard Liu said as recently as April last year that JD Logistics was losing big money and could go bust in the near term unless its situation improves.

Seeking to break an addiction to online advertising, Baidu Inc. hoovered up a live video giant.

The takeover will give Baidu access to YY Live’s 4.1 million paying users as the search engine giant struggles against runaway upstarts like TikTok-maker ByteDance. The deal, which is expected to close in the first half of 2021, will include the YY mobile app, YY.com website and PC YY.

The past two years have not been easy for foreign students in the U.S. As the Covid-19 pandemic rages through the country with nearly 11 million confirmed cases and at least 244,000 deaths, a fraught U.S.-China relationship, civil unrest fueled by systemic racism and the Trump administration’s unfriendly visa policies have forced many to rethink their decision to study at American universities.

India remained the second-largest source of international students but posted a 4% year-over-year decrease to 193,124 students, the first decline since 2013. While China continued to be the largest source of international students in the U.S., with enrollments increasing for the 16th consecutive year to 372,532, the enrollment growth rate has slowed to the lowest in a decade, up only 0.8% year-over-year.

China’s biggest steelmaker by output is to expand further after finishing its fourth acquisition this year as part of Beijing’s campaign to consolidate the country’s steel industry.

The second-largest steel mill in the western region of Xinjiang, Xinxing Ductile Iron Pipes Xinjiang Co. Ltd., with a yearly capacity of 3 million tons, will be consolidated into China Baowu Steel Group Corp. Ltd. for 2.2 billion yuan ($334 million), according to a statement Friday by a listed arm of Baowu. The deal will expand Baowu’s annual capacity to 114.4 million tons.