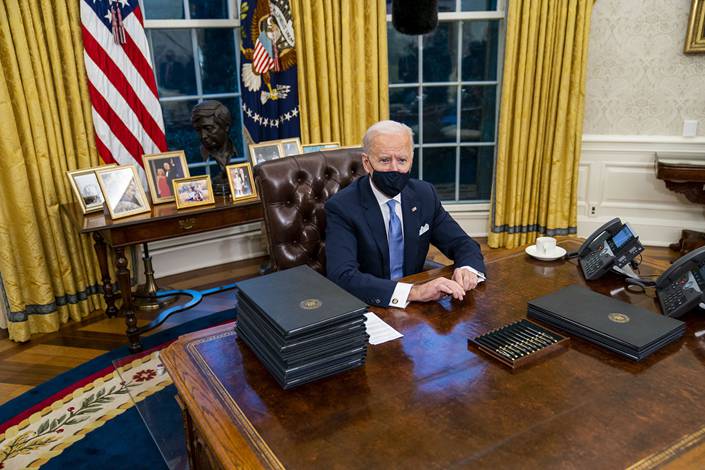 The quiet Lunar New Year holiday may be fast approaching, but you would never know from the steady flow of big news this past week. Leading the pack was the inauguration of Joe Biden as the new U.S. president, ushering in what many hope will be a period of calm after the departure of his stormy predecessor Donald Trump. China also got its own big news with the resurfacing of Alibaba’s billionaire founder Jack Ma three months after he was last seen in public. And last but certainly not least, China managed to post positive GDP growth for 2020, a year that most of us would rather forget.

Joe Biden’s inauguration was front page news for most of the week, including at Caixin Global. But experts don’t seem to think the Biden era will necessarily mean big change for U.S.-China ties.

And on more regional note, check out this exclusive interview with the new Japanese ambassador to China that touches on Asia’s most important bilateral relationship.

I’m quite proud of Caixin’s in-depth coverage of what is shaping up as a true story that could easily go toe-to-toe with some of John le Carré’s best. Check out this overview of the tale of the deadly poisoning of the chairman of a well-known gaming company.

And if you can’t get enough of this story, check out this exclusive in which we uncover many of the lurid details behind the main suspect in the case, including his fixation on the TV series “Breaking Bad.”

In a completely different vein, check out our latest cover story on China’s approach to a topic facing much of the world, namely how and why to tax the digital economy.

Return of the billionaire

The disappearance of Alibaba founder Jack Ma from public view led to all sorts of speculation the past three months, though at least some of that was put to rest with his resurfacing at an online event.

It may be less racy on the surface, but China’s final GDP growth of 2.3% for 2020 means it’s likely to become the only major economy to grow during a year that will go down in history for the Covid-19 pandemic.

And speaking of the pandemic, China is taking no chances in the run-up to the Lunar New Year. See what the country is doing to try to keep the virus at bay.

Finally, if it’s a good Hollywood-style scandal you’re seeking, look no further than our “Trending in China” series. This week China’s online realm was buzzing overtime with revelations that a leading actress, who also recently signed up as a Prada brand ambassador, had abandoned her unborn surrogate children after breaking up with her husband.

Trending in China: Surrogacy Scandal Sinks Actress’s Prada Deal in Under a Week