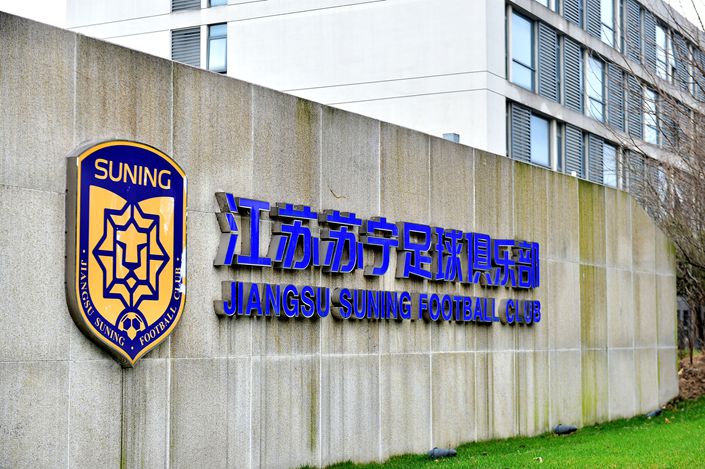 The club said Sunday it would “cease operations” without giving further details, just as Suning.com Co. Ltd. announced a $2.3 billion state-led bailout that will hand over nearly a quarter of the company to financing vehicles controlled by the government of the Guangdong province metropolis of Shenzhen.

Suning.com’s billionaire founder Zhang Jindong, who once spoke of his company nurturing the hometown team as a first class Asian club, signaled a change in the wind at Suning’s annual conference in December where he plugged the debt-saddled business's renewed “focus on retail.”

State comes to the rescue of former retail superstar Suning

China’s plan to dramatically reduce greenhouse gas emissions over the next four decades will put increasing pressure on a financial system that isn’t ready, according to top industry regulators and banking experts.

On the one hand, banks and other financial institutions could benefit from rising demand for tens of billions of yuan of green financing to pay for sweeping changes throughout the economy, according to Ma Jun, a member of the monetary policy committee of the People’s Bank of China (PBOC) and director of the Green Finance Committee of the China Society of Finance and Banking.

On the other hand, the industry must learn to account for rising climate-change risks as they go about their business of underwriting credit, said Ye Yanfei, director general of the policy research bureau at the China Banking and Insurance Regulatory Commission (CBIRC). Assets invested in companies or projects that rely on traditional and dated technologies may risk becoming stranded or losing their value, Ye said.

China is poised to require certain financial institutions to start planning for how to handle their affairs if they ever find themselves on life support.

The goal for these plans, often called “living wills,” is to ensure that teetering financial institutions don’t end up forcing the state to swoop in with costly bailouts to prevent the possibility of a systemic collapse of the financial system. Since 2019, authorities have stepped in to bail out several banks, including Baoshang Bank Co. Ltd., Hengfeng Bank Co. Ltd. and Bank of Jinzhou Co. Ltd.

China’s economic recovery continued last month but at a slightly slower clip as the expansion in manufacturing activity was the weakest since May 2020, a Caixin-sponsored survey showed.

The Caixin China General Manufacturing Purchasing Managers’ Index (PMI), which gives an independent snapshot of the country’s manufacturing sector, fell to 50.9 in February from 51.5 the previous month, according to a report published Monday.

A number above 50 indicates an expansion in activity, while a reading below that signals a contraction. The February reading showed manufacturing activity has expanded for 10 months in a row; however, the pace slowed for a third consecutive month.

China and the U.S. will co-chair the G-20 Sustainable Finance Study Group (SFSG), potentially heralding greater cooperation between the economic heavyweights in the development of green finance and climate change more broadly.

The People’s Bank of China (PBOC) and the U.S. Department of the Treasury will chair the group, which is being relaunched after a two-year suspension, sources with knowledge of the issue told Caixin.

The SFSG will study plans to cope with financial risks stemming from climate change, strengthen the disclosure of climate-related information, and support green transformation, according a Saturday statement (link in Chinese) from the PBOC.

Chinese leaders are studying a detailed plan to raise the retirement age in response to an aging population, You Jun, a vice minister of human resources and social security, said (link in Chinese) Friday at a press conference in Beijing.

At the end of 2019, 18.1% of China’s population (link in Chinese), or about 250 million people, were ages 60 or above, official data show. The number of “people of advanced age” is expected to exceed 300 million during the next five-year plan that will run through 2025, You said.

China fintech curbs that hit Ant Group were no surprise, Ping An says

Wuhan Hongxin sent notices to all of its workers Friday, company sources told Caixin. The move came more than one year after the project ground to a halt.

The company made clear that “there is no plan for production resumption” and told workers to submit their resignation applications before Feb. 28, one employee said. The person said the company hasn’t offered any compensation plan. “I didn’t expect Wuhan Hongxin to fail so quickly as there have been speculation that companies such as Xiaomi Corp. or Huawei Technologies Co. might take over,” one employee said.

Trading will be suspended March 9, though the issuer has a right to a review of the determination, the exchange said in a statement after hours Friday in New York. The exchange cited the executive order as well as updated guidance provided Jan. 27 by the U.S. Treasury’s Office of Foreign Assets Control.

The move followed the drama around the delisting of China’s three biggest telecommunications companies last month, with the NYSE at one point reversing the decision before enforcing it again. The reversal caused confusion over the U.S. policy behind the NYSE’s move.

China's government launched a review after a conservation group raised an alarm over how more than 1,600 reports bearing the credentials of a single environmental impact assessment (EIA) engineer could be submitted to authorities during a four-month period late last year.

The reports were submitted to environmental authorities starting in late September 2020, according to a report by the Guangzhou Green Data Service Center, a group that publishes data on environmental violations. The reports related to construction projects in 25 provinces and regions in China, the group said.

The findings (link in Chinese) deepen fears of deep-rooted fraud in China’s EIA sector and raise the prospect that some projects have more significant adverse impacts on the environment and human health than have been disclosed to the government.

Yancoal Australia swings to loss in 2020 amid China-Australia tensions