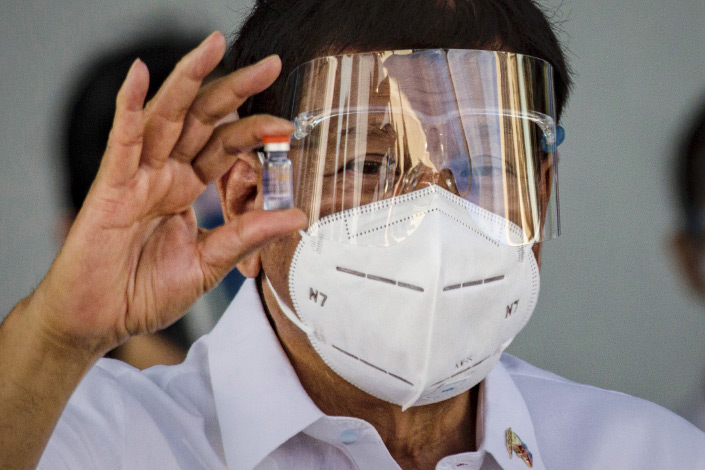 Governments around the world are picking up the pace of approving and administering new vaccines in the fight against the coronavirus that has killed more than 2.5 million people and sickened more than 115 million worldwide.

Four vaccines are now cleared for public use in China after the recent approval of two new shots — an inactivated-virus vaccine developed by state-owned Sinopharm's affiliate Wuhan Institute of Biological Products, and a viral vector vaccine developed by CanSino Biologics Inc.

The world’s most populous country faces mounting pressure to accelerate vaccinations to plug the immunity gap against Covid-19 in the population, pressing vaccine-makers to accelerate production.

China remained the world’s manufacturing powerhouse last year as its factories made a strong recovery from the impact of the Covid-19 pandemic and as overseas demand for medical equipment and work-from-home-related consumer goods surged.

Output from the country’s manufacturing sector rose 2.3% to 26.6 trillion yuan ($3.85 trillion) in 2020, data from the National Bureau of Statistics (NBS) show. Although the growth rate was about half the 4.6% pace of 2019, the world’s second-largest economy is certain to have retained its No. 1 position given the size of the gap with its nearest rivals.

China has been the world’s largest manufacturing nation for 11 straight years, Xiao Yaqing, head of the Ministry of Industry and Information Technology, said at a briefing (link in Chinese) Monday.

Hangzhou, one of the most expensive housing markets in China, joined Shanghai, Shenzhen and other megalopolises in taking further steps to crack down on real estate speculation amid surging housing prices.

Xiao has been working in the new position since February, according to the China Banking and Insurance Regulatory Commission (CBIRC) website, though it didn’t update his profile until late Thursday.

While he was chief risk officer, Xiao also served as a CBIRC spokesperson and head of its general office. A veteran regulator born in 1966, Xiao had worked in a variety of positions at the People’s Bank of China and at the now-defunct China Banking Regulatory Commission (CBRC), which merged with the country’s insurance regulator to form the CBIRC in 2018.

American Secretary of State Antony Blinken called the U.S.’s dealings with China the defining test of the century as he set out a broad agenda that he said would do more to ensure that foreign policy benefits ordinary Americans.

Blinken said the U.S. approach to China will be “competitive when it should be, collaborative when it can be and adversarial when it must be.”

“China is the only country with the economic, diplomatic, military and technological power to seriously challenge the stable and open international system,” Blinken said in remarks delivered by video from the State Department.

Two Sessions 2021: What to watch for at China’s biggest political meetings of 2021

Dutch firm ASML Holding N.V. extended its contract to supply lower-tech chipmaking machines to Semiconductor Manufacturing International Corp. through year-end, providing a lifeline for the leading Chinese firm, which has been hobbled by U.S. sanctions.

The Chinese company, also known as SMIC, told the Hong Kong Stock Exchange Wednesday that it agreed to buy $1.2 billion of ASML equipment between March 2020 and March 2021.

It was able to do that after amending a previous long-term supply deal with ASML that expired at the end of last year, extending the deal by a year. Those moves seemed to indicate the pair intend to continue doing business despite reported earlier U.S. efforts to cut off such sales.

China wants people to drink more liquor in the next five years, according to the new five-year development plan of southwest China’s Guizhou province, the home of the world’s most valuable liquor-maker Kweichow Moutai.

Guizhou’s plan targets yearly output of baijiu, a clear liquor made from sorghum and other grains, to reach 600 million liters by 2025 and a liquor industry value of 250 billion yuan ($38.7 billion). The goal means a 20% expansion in liquor output and a doubling of value from 2020.

Guangzhou-based Yatsen Holding Ltd. committed to buying the high-end cosmetics company from its current owner Manzanita Capital Ltd. for an undisclosed sum, the firms said in a joint statement Tuesday. They said they will finalize the deal in the coming weeks.

Manzanita Capital, a London-based investment company focused on premium cosmetics, will continue to hold a minority stake in Eve Lom as a “strategic partner,” Yatsen said, without elaborating on the nature of the partnership.

New York-listed car-sales website Autohome Inc. is planning a secondary listing in Hong Kong in a HK$7.6 billion ($980.1 million) floatation, according to a company filing Wednesday.

The Beijing-based company, whose American depositary receipts are already traded in New York, will issue 30.3 million shares in the listing, with 10% going to retail investors and 90% for bigger institutional investors. The offering, which runs from Wednesday through next Tuesday, will start trading on the main board on March 15.