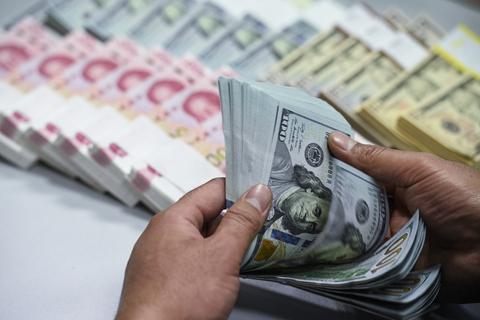 China last year reported the first annual deficit on the financial account in its balance of payments in four years as regulators allowed more money to flow out of the country to ease appreciation pressure on the yuan stemming from rising foreign investment in the country’s capital markets.

The 2020 deficit, excluding reserve assets held by the central bank, amounted to $77.8 billion, although that’s down from an initial estimate of $175.9 billion given in February, according to revised figures for the balance of payments released by the State Administration of Foreign Exchange (SAFE) on Friday.

It’s the first shortfall since 2016 when the country had a financial account deficit for the year, excluding reserve assets, of $416.1 billion. The financial account includes domestic ownership of foreign assets –– such as deposits, loans, securities, commodities and direct investment –– and foreign ownership of domestic assets.

Ruili, Yunnan province, ordered residents to remain at home for seven days beginning Wednesday and has started to roll out mass testing, the city’s Epidemic Control Command Center said in a public statement. According to the statement, those who need to leave their homes for “special reasons” will need to seek permission from authorities in their communities.

All businesses except supermarkets, pharmacies and farmers’ markets are to shut down, the statement said, without setting a date for reopening.

WHO calls for further studies on origins of Covid-19

China rejects allegation it kept information from WHO Covid-19 investigators

A unit of BlackRock Inc., the world’s largest asset manager, is closing down its private fund business in China after just three years and instead will focus on mutual funds in a move to meet regulatory requirements.

BlackRock won approval from China’s securities regulator in August to set up a wholly foreign-owned mutual fund management company (link in Chinese), the first on the mainland, as part of the firm’s ambitions to expand the scale of its business.

Senior rural banking regulator turns himself in to graft investigators

Guo Hong, head of the Rural Small and Medium-sized Banking Institution Supervision Department of the China Banking and Insurance Regulatory Commission (CBIRC), turned himself in to graft busters, an official statement (link in Chinese) said Wednesday.

He was taken away by authorities Friday, sources with knowledge of the issue told Caixin. Guo, 49, had worked in a variety of positions in the now-defunct China Banking Regulatory Commission (CBRC) until 2018, when the CBRC was merged with the China Insurance Regulatory Commission to form the CBIRC. The same year, he was appointed to his current position.

Ride-hailing giant Didi Chuxing Technology Co. Ltd. won regulatory approval to take an equity stake in a consumer finance company, a move that could help the company deepen its footprint in the fintech sector.

Dirun (Tianjin) Technology Co. Ltd. (迪润(天津)科技有限公司), a wholly owned subsidiary of Didi, has been given the go-ahead to invest in Bank of Hangzhou Consumer Finance Co. Ltd. (BHCF) by subscribing for 853.9 million new shares, according to a statement (link in Chinese) released Friday by the Zhejiang bureau of the China Banking and Insurance Regulatory Commission (CBIRC).

No details were given about the value of the investment, although the statement said the registered capital of the consumer finance firm will rise to 2.6 billion yuan ($395.4 million) from 1.3 billion yuan.

The Hong Kong government will submit a draft plan revising the special administrative region’s electoral system by mid-April for the Legislative Council, the judicial arm of the semi-autonomous city, to review and approve by May, Chief Executive Carrie Lam said Wednesday during a press conference.

The chief executive election will be in March next year. Lam’s term will end in June 2022, and she will be eligible for a second term.

Chinese smartphone maker Xiaomi Corp. is jumping on the electric car manufacturing bandwagon with a plan to invest $10 billion in the new business over the next decade.

Xiaomi will set up a new smart car division with initial investment of 10 billion yuan ($1.5 billion), the company said Tuesday. Xiaomi’s billionaire founder and Chief Executive Officer Lei Jun will head the new unit, according to a filing with the Hong Kong stock exchange.

Lei said Xiaomi will rely on its own money to fund the new business, although many investors showed interest. With 108 billion yuan of cash and cash equivalents as of the end of 2020, Xiaomi is capable of underwriting the costs of developing the car business, Lei said.

The next step in developing the world’s largest untapped iron ore mine depends on whether the two consortiums involved can strike a deal on issues including local infrastructure, Anglo-Australian mining giant Rio Tinto told Caixin.

Simandou, a 110 kilometer (68 miles) range of hills deep in the hinterland of Guinea in West Africa, is considered to be world’s largest, highest-quality iron ore deposit with some experts forecasting annual production could hit 150 million tons. That would turn the country into one of the world’s largest producers of the commodity.

But even though the project has lured in several mining conglomerates, no sustained work has been done to commercialize the site.

China was the source of 370 retracted scientific papers, Nature reports

An article in the British scientific journal Nature exposed how systematic production of falsified research by so called “paper mills” in China has affected the academic reputations of Chinese medical researchers among global publishers.

The article, “The fight against fake-paper factories that churn out sham science,” published Tuesday in Nature, reported that the journal tallied 370 articles that scientific journals retracted since January 2020. All were from authors at Chinese hospitals that either publishers or independent sleuths alleged to have been generated by companies that churn out fake scientific manuscripts to order, known as paper mills. Nature said it expects many more retractions to follow.

WM Tech Corp. Ltd., owner of Chinese retailer Wumart Stores, is hoping the second time is the charm as it seeks to relist in Hong Kong five years after it delisted from the same bourse citing uncertain market conditions for hypermarkets in China and as it faced growing challenges from rising e-commerce rivals.

The company did not specify the amount of shares it plans to offer in the prospectus or give a time frame, but it said proceeds would be earmarked for investment in expanding its supply chains, continuing digitalization of its retail business and opening new offline stores.