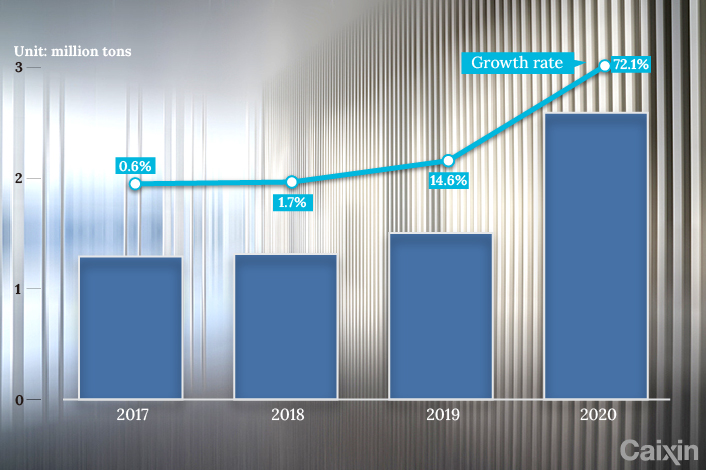 In Depth: China’s climate goals leave one province torn between past and future

The scenic southwestern Chinese province of Yunnan is known for its tourism and rich resources for hydropower. Over the past few years, it has donned a new name — the aluminum valley of China — thanks to the massive relocation of electrolytic aluminum producers attracted by the region’s low electricity prices from all that hydropower.

The transition has turned out to be faster than the province was ready for. In mid-September, the provincial government announced that local smelters must cut aluminum production by 30% for the rest of 2021.

It’s a belated response to an unusual power shortage that happened in May in the province. The shortage was due in part to the surge in industrial electricity consumption. The squeeze was also felt by the more developed, southern coastal province of Guangdong, which relies heavily on Yunnan for electricity.

Caixin Explains: What’s at stake in the massive Unigroup restructuring

As China moves to reboot Tsinghua Unigroup Co. Ltd., a handful of companies including Alibaba Group and enterprises backed by the governments of Guangdong, Beijing and Wuxi have shown interest in bidding for the assets of the former semiconductor highflyer, Caixin learned.

The bankruptcy restructuring of Unigroup is aimed at finding strategic investors to assume the company’s massive assets and debts and revive some of the conglomerate’s promising businesses. By the end of June 2020, Unigroup had 296.6 billion yuan ($46 billion) of total assets with 202.9 billion yuan of liabilities, according to a company filing.

As global investors get ready for the first offshore derivatives tool officially sanctioned by Chinese regulators to help them hedge the risks of investing in mainland A-share markets, the company that designed the underlying index has been explaining how it was put together.

Wei Zhen, head of Asia Pacific index solutions research at MSCI Inc., laid out the methodology and rationale behind the MSCI China A 50 Connect Index at a briefing Tuesday. More than 90% of overseas investors trade A-share stocks through the stock connect programs, and the new index was created with investor demand in mind by including various sectors and incorporating emerging industries, he said.

Huarong puts $58.8 billion of bad assets up for sale

Chinese foreign minister Wang Yi concluded his six-day trip to neighboring countries in Southeast and East Asia to promote cooperation on issues including the Belt and Road Initiative and manage tensions in the South China Sea, according to statements from the Foreign Ministry.

The top diplomat met his counterparts and country leaders during the visit to Vietnam, Cambodia, Singapore and South Korea from Friday to Wednesday. His trip was taken a few weeks after U.S. Vice President Kamala Harris’s weeklong visit to Asia in late August when she accused China of continuing “to coerce, to intimidate and to make claims to the vast majority of the South China Sea” and “undermine the rules-based order and threaten the sovereignty of nations.”

More than 90% of Chinese students ages 12 to 17 have been fully vaccinated against Covid-19, state media reported Wednesday, citing the Ministry of Education.

Additionally, more than 95% of students, teachers and school staff over 18 have received two doses of a Covid vaccine, according to the state-run Xinhua News Agency report.

The chairman of troubled China Evergrande Group, Hui Ka Yan, stepped down as director of a company that owns a luxury house in Hong Kong, public records show.

The move is being closely watched by Evergrande creditors as the Hong Kong-listed real estate giant is struggling to raise cash to repay a huge pile of debts, some of which it has defaulted on. Some creditors have applied for courts to freeze its assets.

The property is located on Hong Kong Island’s Black’s Link trail, along which there are wealthy communities with a number of similar villas and expansive views. Its value is estimated at about HK$800 million ($102.8 million), according to market watchers.

A Munich-based air taxi developer backed by Chinese tech giant Tencent Holdings went public in the U.S. this week after a merger with a blank-check company, showing the Chinese tech giant’s strong interest in flying cars which some believe can revolutionize aerial transportation and logistics.

Lilium GmbH, the six-year-old German startup that is aiming to commercialize its electric vertical take-off and landing vehicles in 2024, began trading on the Nasdaq Wednesday, a day after it announced completion of its merger with a special purpose acquisition company (SPAC) named Qell Acquisition Corp., which is led by Barry Engle, the former president of General Motors North America.

China’s top coal producers swore to buy more green energy through the country’s recently launched trading program, which aims to support the transition away from energy sources which fuel climate change — such as coal.

The new operating system, named Kuanghong in Chinese, is based on Huawei’s in-house HarmonyOS and is the first customized operating system developed by Huawei for industrial application.

GM’s China venture is developing its own microchips, report says