CX Daily: Xi Tells Biden That China And U.S. Should Respect Each Other And Cooperate 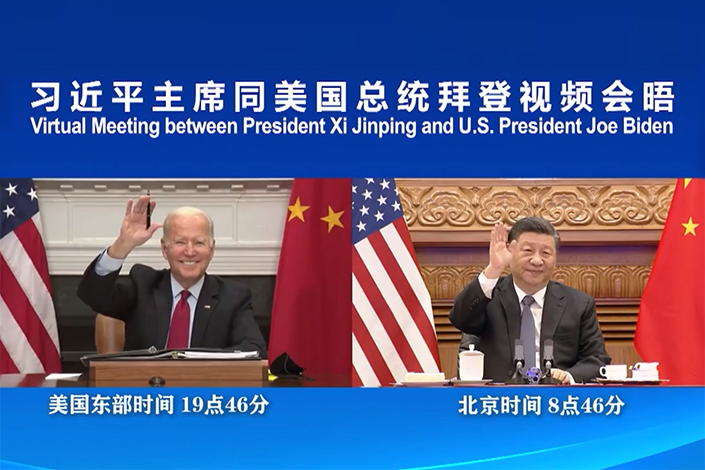 Xi tells biden that China and U.S. should respect each other and cooperate

Xi also said the world’s two largest economies should not just focus on their own domestic affairs, but should also shoulder international responsibilities, state media reported.

Singapore state investor Temasek Holdings launched a new investment and advisory vehicle for alternative food startups in its latest bet that the meat of the future will come not from pastures, but from vats.

China sketches out next phase in crypto mining crackdown

China’s top economic planning agency offered more details about how it will fulfill its promise to root out cryptocurrency mining, saying that in the next phase the crackdown will focus on industrial-scale mines and state-owned entities’ involvement.

Authorities will also prioritize the elimination of Bitcoin mining in particular, Meng Wei, a spokesperson for the National Development and Reform Commission (NDRC), told a Tuesday press conference.

In addition, the NDRC will force crypto mining projects that currently pay residential electricity prices to pay higher rates as a punishment, Meng said, after being asked about what the NDRC’s next steps will be in its crackdown on the industry.

China’s statistics bureau played down concerns that the world’s second-largest economy risks falling into stagflation, describing this year’s surge in factory-gate prices as a temporary phenomenon caused by short-term disruptions that are gradually being addressed.

Rising global commodity prices and domestic supply shortages of energy and some raw materials are the main reasons for the jump in producer-price inflation that’s affected China this year, Fu Linghui, a spokesman for the National Bureau of Statistics, said Monday at a briefing after the release of October economic activity data. The increase in commodity prices has led to higher costs for some businesses, he said.

A former chair of state-owned Dongguan Trust Co. Ltd. has been removed from public office for allegedly taking bribes, the local antigraft authority in the southern Chinese city of Dongguan said in a Monday statement (link in Chinese).

Huang Xiaowen, 48, is accused of taking bribes and abusing her power to seek benefits for others. She is also accused of embezzling company assets. The statement did not specify which company.

Hong Hao: Investors should put their money on the ‘dogs’ of 2021

Shares of Hong Kong-listed Chinese real estate developer Sunac Co. Ltd. fell 13% to close at around HK$15 ($1.90) Monday after the company and its property services arm said they intend to raise billions of Hong Kong dollars through a private share sale.

Sunac said in a Sunday exchange filing that the firm entered a private placement agreement to raise nearly HK$5.1 billion by selling 335 million new shares, which account for 7.19% of the firm’s existing total shares and 6.7% of the total after the new shares are issued.

In addition, Sun Hongbin, the controlling shareholder and chairman of Sunac, is lending $450 million from his own pocket to the developer in the form of an interest-free loan.

China Telecom Americas Corp., the U.S. subsidiary of China Telecom Corp. Ltd., asked an appeals court to block a decision by the Federal Communications Commission (FCC) ordering the wireless carrier to discontinue its services in the country by early January 2022.

Its filing to the Court of Appeals for the District of Columbia Circuit Monday said that if the order was not revoked, it would be forced to cease “significant” operations, which would “irreparably” harm its business, reputation, and relationships.

China’s State Council, the cabinet, appointed Gan Lin as the new head of the country’s anti-monopoly bureau under the State Administration for Market Regulation (SAMR), the Ministry of Human Resources and Social Security of China said Monday on its website.

Gan, 58, was deputy minister of the SAMR since 2011, in charge of anti-monopoly enforcement, price inspection and anti-unfair competition supervision. She also has served as a member and secretary-general of the Anti-Monopoly Commission of the State Council since 2018.

A money-losing intracity delivery subsidiary of major Chinese courier SF Holding Co. Ltd. is on course to sell shares in Hong Kong as it looks to to expand its funding sources and its share of the country’s competitive logistics industry.

Hangzhou SF Intracity Industrial Co. Ltd., which became an independent entity in 2019, won approval to go public on the Hong Kong Stock Exchange, according to a post-hearing information pack filed Monday. This comes about six months after SF Holding listed some of its property assets in the former British colony.

Electric semi-trailers are next step in greening China’s roads