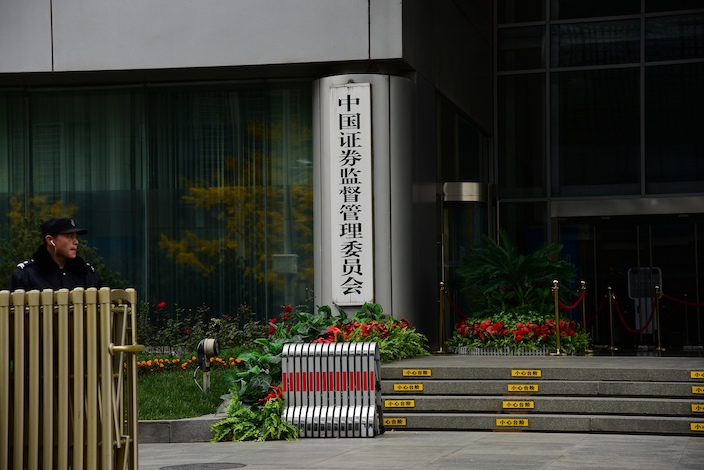 Chinese regulators want companies to choose their own listing places.

An official from the China Securities Regulatory Commission (CSRC) said Wednesday that the regulator has noticed the media reports, which are “not true.”

Chinese regulators, including the National Development and Reform Commission, the CSRC, and the Ministry of Commerce, have indeed been recently formulating new regulatory measures on VIE structures recently, Caixin learned.

Long-suffering shareholders in debt-ridden Kangmei Pharmaceutical Co. Ltd. who lost money as a result of an 88.6 billion yuan ($13.9 billion) fraud, have moved closer to winning compensation after two court rulings over the past three weeks.

On Nov. 12, a court in Guangzhou made a landmark ruling in the country’s first securities class-action lawsuit, ordering Kangmei to pay 2.46 billion yuan to more than 50,000 shareholders who lost money because of a massive fraud at the company.

Uncertainty over whether the investors would ever get their money was partly cleared up on Friday when Kangmei’s bankruptcy reorganization plan was approved by a local court in Jieyang, Guangdong province.

China’s insurance group companies will be required to have a clear equity structure and a reasonable level of equity ownership in subsidiaries, focusing on their core insurance business, according to revised regulations issued Tuesday by China’s banking and insurance regulatory commission.

The revision is part of a series of new rules to improve corporate governance in the insurance industry and curb disorderly expansion after a string of high-profile scandals and debt-fueled expansions that posed risks to the country’s financial system.

China had 13 large insurance groups with total assets of 22 trillion yuan ($3.45 trillion) under management as of year-end 2020, dominating the insurance market.

Activity in China’s manufacturing sector contracted in November for the first time in three months as demand remained subdued amid Covid-19 flare-ups despite a recovery in supply, a Caixin-sponsored survey showed Wednesday.

The Caixin China General Manufacturing Purchasing Managers’ Index (PMI), which gives an independent snapshot of the country’s manufacturing sector, fell to 49.9 in November from 50.6 the previous month, according to the survey report. Readings of less than 50 indicate contraction.

China’s envoy to the International Atomic Energy Agency (IAEA) criticized the submarine deal of the U.S., the U.K. and Australia as “a sheer act of nuclear proliferation,” which endangers “the post-war international security order.”

Wang Qun, Chinese envoy to the United Nations and other international organizations in Vienna, made the remarks at a Friday China-Russia joint press conference following the IAEA board of governors meeting, according to the Chinese Foreign Ministry.

China is predicted to record an 81% reduction in its cumulative climate-related losses by 2100 if it achieves its carbon neutrality target, according to a study from think tanks in Beijing and London.

The country is also expected to avoid $134 trillion in cumulative losses from 2020 to 2100 if it reaches the target, according to the study published Tuesday by Tsinghua University’s Institute of Energy, Environment and Economy (IEEE) as well as the Chatham House, an independent policy institute in the U.K.

Opinion: Why China is unlikely to fall into the middle-income trap

Shares of Yangtze Power will be suspended from trading for up to 10 trading days while Three Gorges works on a plan to inject the financial assets of Wudongde and Baihetan hydropower stations into the Shanghai-listed firm, according to a Monday exchange filing (link in Chinese).

Yangtze Power would acquire Three Gorges Jinsha River Yunchuan Hydropower Development Co. Ltd., the company that owns the two hydroelectric stations, either through stock, bonds, or cash, according to the statement.

Beijing gave provincial and local governments until the end of the year to develop clear systems for resolving labor disputes related to the ride-hailing sector as part of new guidelines introduced Tuesday.

The guidelines, which are aimed at protecting the rights of ride-hailing drivers, come after the top transport authority first mentioned the need for such measures in mid-August amid the regulatory storm surrounding Didi Global Inc.

Guangzhou Automobile Group Co. Ltd. (GAC) plans to inject 11 billion yuan ($1.7 billion) into its wholly-owned electric vehicle subsidiary as the unit is poised to launch sales of a rechargeable car that could have the world’s longest range.

The Shanghai-traded GAC (SHA:601238) will pour 7.4 billion yuan in cash and 3.6 billion yuan in tangible assets including manufacturing equipment into GAC Aion, it said Monday in an exchange filing (link in Chinese).

The Ministry of Industry and Information Technology (MIIT) Tuesday published the 14th Five-Year Plan (link in Chinese) to guide the big data industry. According to the plan, China’s big data industry will exceed 3 trillion yuan ($470 billion) by the end of 2025, with an average annual growth rate of around 25%.

Cloud Village takes rivalry with Tencent Music to the market