CX Daily: Why The World Is Burning Up This Summer 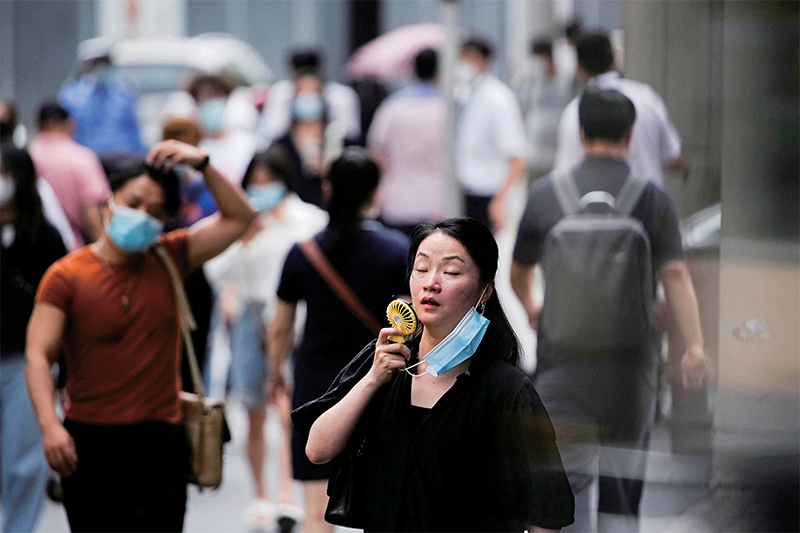 Cover Story: Why the world is burning up this summer

From Shanghai to Dallas, from Paris to London, a record-shattering heat wave is sweeping the entire northern hemisphere. On the temperature map, areas marked in deep red and orange, indicating temperatures above 35℃, cover wide swathes of Europe, North Africa, North America, East Asia and the Middle East.

China’s top state leaders have been vaccinated against Covid-19 with domestically developed jabs, the deputy head of the National Health Commission (NHC) said Saturday at a briefing.

“It shows the leaders’ confidence in Chinese vaccines,” Zeng Yixin said, according to a readout (link in Chinese) of the briefing. It did not identify any of the vaccinated leaders by name.

A Beijing court ruled against a legal challenge by an unmarried woman seeking to freeze her eggs. The case put the spotlight on women’s reproductive rights in China and limitations single women face in delaying parenthood.

Since 2019, Xu Zaozao (not her real name) turned to legal action to defend her reproductive rights after her request to freeze her eggs was rejected by a local hospital due to her marital status. Xu was reportedly the first unmarried woman in the country to do so. Chinese regulations state that married women are allowed to freeze their eggs if they have fertility issues.

CMB, one of the country’s largest commercial banks, said Friday that its board decided to withdraw an application to open China Merchants Tuopu Bank and terminate preparations. The decision came more than a year after the bank won approval from the top banking regulator to set up a direct banking joint venture with financial services platform Jingdong Digits Technology Holding Co. Ltd. (JD Digits).

China is expanding a trial program that facilitates multinational firms’ cross-border use of funds, another step in the country’s long-running push to internationalize the yuan.

Under the pilot program, first launched in Beijing and Shenzhen in March 2021, selected businesses can combine their cross-border yuan and multiple-currency cash pools into a single pool and buy foreign currencies for overseas payments at will within certain limits.

An official once responsible for overseeing village banks in Central China’s Henan province has been placed under investigation by anti-graft agencies in the wake of a multibillion-dollar banking scandal.

Li Huanting, an inspector at the provincial branch of the China Banking and Insurance Regulatory Commission (CBIRC), is suspected of serious violations of law and Communist Party discipline, the Central Commission for Discipline Inspection (CCDI) said in a statement Sunday, without offering further details. Such announcements typically allude to corruption.

Editorial: How to ‘lubricate’ the frictions in China’s labor market

Shanghai and Hong Kong-listed Chalco will pay 6.66 billion yuan ($986.5 million) for around 19% of Yunnan Aluminum, the company said Sunday in an exchange filing (link in Chinese). The per share price of 10.11 yuan represents a premium of 5.5% on the closing price Friday.

Russia surpassed Saudi Arabia as the largest crude oil supplier to China over the past two months as Western sanctions due to Moscow’s invasion of Ukraine dragged down prices of its petroleum exports, boosting their appeal among Asian buyers.

Last month, China imported 7.3 million tons of crude oil from Russia, up 9.5% from the same period in 2021, according to data provided to Caixin on request from the General Administration of Customs. Oil imports jumped 54.8% year-on-year to 8.4 million tons in May.

Zheng Jianhua, former chairman of state-owned electric equipment manufacturer Shanghai Electric Group Co. Ltd., has been removed from public positions and expelled from the Communist Party due to alleged bribery and other misconduct, according to a Friday statement from the state anti-graft agency.

The Central Commission for Discipline Inspection accused Zheng of abusing his power and causing “tremendous loss” to state-owned assets, as well as accepting bribes and embezzling public funds. He will later stand trial, the statement said.