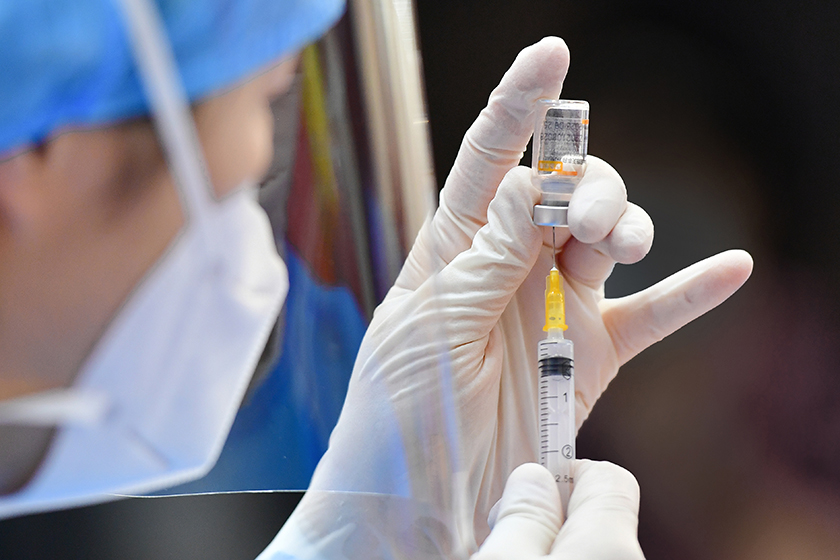 In September, China approved two Covid-19 vaccines for emergency use as heterologous boosters — vaccines that are different from the ones people use to complete their primary series of inoculations. Photo: VCG

In Depth: What’s next for China’s Covid vaccine strategy?

What’s key among those measures might be ramping up booster vaccinations for the elderly as experts said elevating immunity against the ever-mutating omicron variant is a prerequisite to further easing restrictions. The challenges, they said, are that the community’s uptake of first booster doses remains low and that a search for more effective vaccines is still ongoing.

The number of Chinese students in the U.S. declined for a second consecutive year, a recent report showed, as the Covid-19 pandemic and strained Sino-U.S. relations made it difficult for students to travel and secure visas.

Chinese student enrollment in the U.S. dropped below 300,000 in the 2021-22 school year for the first time since 2014-15, according to the annual Open Doors report released Monday by the Institute of International Education (IIE) and the U.S. Department of State. The 8.6% fall follows a 14.8% drop in the previous academic year.

A recalibration of China’s “zero-Covid” strategy to mitigate its economic impact will be critical to sustaining a balanced recovery in the world’s second-largest economy, a senior International Monetary Fund (IMF) official told the 13th Caixin Summit Thursday.

As for the country’s ailing property sector, “urgent action” from the central government is needed to maintain financial stability, IMF First Deputy Managing Director Gita Gopinath said in a video speech at the conference in Beijing.

China, U.S. should cooperate like they did during global financial crisis, Summers says

China’s central bank Governor Yi Gang and U.S. Treasury Secretary Janet Yellen exchanged views on the economic outlook for the world’s two largest economies Wednesday, days after the leaders of the two countries met in a bid to reset relations.

The two also addressed high and volatile energy and commodity prices in the meeting on the sidelines of a Group of 20 summit in Indonesia, according to a statement from the U.S. Treasury Department. The talk lasted more than two hours and had a “frank, constructive and positive tone,” according to a Treasury official who declined to be named.

Opinion: The yuan’s status as a reserve currency could improve

The vessels are to be built at an abandoned shipyard formerly owned by bankrupt Jiangsu Rongsheng Heavy Industries, once China’s largest privately owned shipbuilder.

Reviving Rongsheng’s idled shipyard will be no easy task.

Ousted TuSimple Holdings Inc. Chairman Chen Mo took control of the company after his fellow co-founder gave him a chunk of voting shares, the latest in a series of twists this year among the leadership of the Chinese driverless truck startup.

The Nasdaq-traded company revealed the change of shareholding in a filing to the U.S. Securities and Exchange Commission Wednesday. The news puts TuSimple into the spotlight again a week after it announced a boardroom clean-out.

As lithium prices continue to hit record highs, the chairman of one large Chinese lithium-ion battery-maker warned of an approaching supply glut between now and 2024 as a recent capacity build-up looks set to outstrip demand for electric-vehicle (EV) batteries over the next few years.

“The excess in supply could emerge next year,” said Liu Jincheng of Eve Energy Co. Ltd., China’s sixth-largest battery supplier, referring to both the batteries and the raw metal input.

Tencent to give $20 billion Meituan stake to shareholders