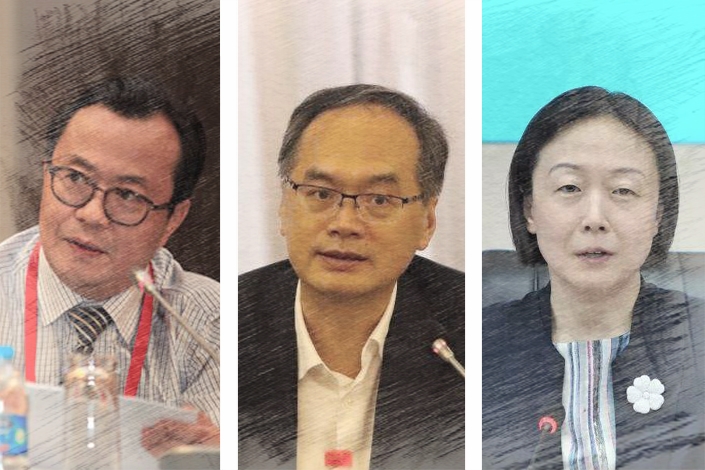 Wu Fulin (吴富林) will become a vice president at Bank of China Ltd., one of the country’s “big four” state-owned lenders, pending review by the China Banking and Insurance Regulatory Commission. Wu is currently a member of the party committee and vice general manager at China Everbright Bank Co. Ltd.

Wu will join a bank that is running low on vice presidents: Zhang Qingsong (张青松) left for The Export-Import Bank of China, and Liu Qiang (刘强) left to join the Shandong provincial government. Wu has been at Everbright for many years, and has a doctorate in economics from Fudan University.

His predecessor, Bai Tao (白涛), left several months ago to join China’s largest property insurer, People’s Insurance Company (Group) of China. Central Huijin is a key member of China’s so-called “National Team” — a group of state-owned institutional investors that stepped forward to support plunging stock markets in 2015 by buying up blue-chip stocks. With the Shanghai Component Index now near a four-year low under pressure from trade tensions and slowing growth, we’re waiting to see how Central Huijin and the rest of the team will play this time.

Guo Ningning (郭宁宁), the first female vice president of Agricultural Bank of China Ltd., will become a vice governor of a province — but we don’t know which one yet. There’s something of a trend in big banks’ senior management heading out to the provinces to help them beef up their financial regulation — see the Liu Qiang entry above.

Guo, who has a doctorate from Tsinghua University, has spent most of her career at the Bank of China, and has managed both its Singapore and Hong Kong branches. She has been at the Agricultural Bank since 2016 with responsibilities for its international business.

Financial institutions who lent money to runaway tech tycoon Jia Yueting (贾跃亭) are taking huge losses after the shares used to secure the loans were sold for just 10% of the value of the unpaid debts. Jia, the founder of the debt-ridden conglomerate LeEco, owed billions of yuan to his creditors when he left China in 2017. He has refused to come back so far, despite government requests that he do so.

Google LLC CEO Sundar Pichai took a swipe at Baidu Inc., the nation’s current search leader, while acknowledging the tech giant’s plans to return to China. Google had shut down its search engine here in 2010.

Dan Watkins has been appointed CEO of J.P. Morgan Asset Management Asia Pacific. He’ll replace Michael Falcon, who will pursue other opportunities, according to a statement released by the company.

Prakash Chakravarti was named Asia Pacific Bureau chief at Refinitiv, formerly the Financial & Risk arm of Thomson Reuters. U.S. private equity firm Blackstone Group LP bought 55% of the unit in January, and the renamed company is now in the midst of layoffs as it restructures. One employee close to Refinitiv said there are rumors the company wants to cut global staffing costs by 30%.

More details from the former “bad-bank” boss Lai Xiaomin (赖小民) case have emerged, and it’s all rather excessive: 3 metric tons of cash, 100 mistresses, and a carefully cultivated provincial power base in Jiangxi, in China’s south. Here are the details.

China’s former internet czar, Lu Wei (鲁炜), admitted in court on Friday to accepting 32 million yuan ($4.6 million) in bribes. Lu was chief of the Cyberspace Administration of China (CAC) and deputy publicity minister until he stepped down in 2016. He was placed under investigation in November.

The Supreme People’s Procuratorate (SPP) on Friday ordered the arrest of Zhang Shaochun (张少春), a former vice minister of the Ministry of Finance — and the third official who has held this position to face corruption allegations. Zhang was dismissed from public office and expelled from the party in late September.

And a flurry of other corruption-related developments emerged this week:

• Bai Xiangqun (白向群), vice governor of the Inner Mongolia autonomous region, was dismissed from office and expelled from the party.

• Ai Wenli (艾文礼), former vice chairman of the Hebei Provincial Committee of the Chinese People’s Political Consultative Conference, was expelled from the party.

• The SPP ordered the arrest of Wang Xiaoguang (王晓光), the former vice governor of Southwest China’s Guizhou province, who was expelled from the party in late September.