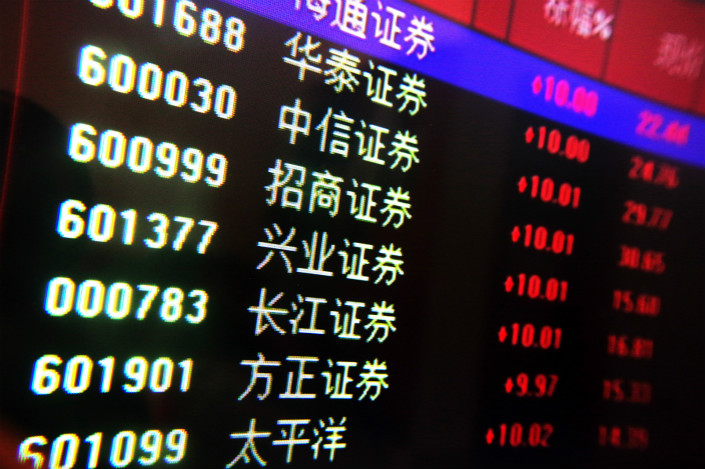 Investors can apply to trade on new tech board

China’s 3 million qualified individual investors can now apply to trade stocks on the coming Nasdaq-style high-tech board, which may open for business in Shanghai by mid-year. Brokerages are already gearing up to accept and process applications online.

The Shanghai Stock Exchange, where the new board will be launched, Thursday instructed investors to apply to their brokerage houses for authorization to trade in the new stocks. In a Thursday statement, the exchange said investors can add new-board trading rights to their existing A-share trading accounts without filing additional paperwork or opening new accounts.

China should pick up the pace in pushing ahead with a 2017 policy of transferring part of the equity of SEOs into the national pension fund to deal with the looming shortfall of the fund, former finance minister Lou Jiwei told us, saying the effort has been moving too slowly.

The implementation of the policy would cushion the impact of Beijing’s move to cut companies’ overall pension contributions to reduce their burden. China is facing the treat of a widening gap between the pension fund’s revenue and expenditure as the population ages and payouts rise. In 2017, China’s pension funds avoided going into deficit only because of subsidies from the central government.

Banks in Shandong, China's third-biggest province and an eastern industrial powerhouse, offloaded more than 220 billion yuan ($32.8 billion) of soured assets from balance sheets over the course of 2018, 18% more than in 2017, the provincial government said in a report.

Beijing has approved the IMF's request to become a renminbi Qualified Foreign Institutional Investor (RQFII), according to an official announcement released Tuesday by the China Securities Regulatory Commission (CSRC).

With the qualification, the IMF can trade in China’s stock and bond markets with the country’s official currency under government-approved quotas. The IMF’s investment quota is not yet available.

Global index compiler MSCI Inc. said listed companies approaching the overseas ownership limit would have their A-shares removed from its China indexes or have their weighting cut, citing “investability” issues.

The announcement came one day after Shenzhen-listed Han's Laser Technology Industry Group Co. Ltd. was cut off from foreign investors as it approached the 30% upper limit for overseas ownership of listed companies set by Chinese regulators.

Wednesday, March 13: The second session of the 13th National Committee of the CPPCC is set to conclude.

NBS will release its February report on sales prices of residential buildings in 70 large and medium-sized cities.

• Chinese stock brokers line up for $10.6 billion in fresh capital

The head of a Chinese TV and home-appliance giant has critiqued Beijing's possible second campaign to bring more major consumer goods to the countryside, saying that without clear regulations and standards, some companies will try to defraud the government.

Previous incentive programs, such as subsidies to farmers, made home appliances such as washing machines and refrigerators affordable for a time in villages, but eventually the market slumped, said Zhao Yong, chairman of Sichuan Changhong Electric Co. Ltd. in a panel discussion during the annual meetings of the National People's Congress .

Chinese telecom giant Huawei is suing the U.S. government over a law that bans the purchase of Huawei equipment, it announced during a press conference Thursday.

The company said it would sue to abolish Section 889 of the 2019 National Defense Authorization Act, whichexplicitly bans executive government agencies from purchasing equipment from Huawei and ZTE, another Chinese telecom provider. The bill was signed into law by U.S. President Donald Trump in August 2018. Huawei’s rotating chairman, Guo Ping, asserted that the ban is illegal.

Meng Wanzhou’s next court appearance is set for May 8

Huawei CFO Meng Wanzhou’s next court appearance regarding her possible extradition has been set set for May 8, though according to Canada's Department of Justice, the date is not the start of the extradition hearing, which has yet to be scheduled.

During a short proceeding Wednesday in British Columbia's Supreme Court, a lawyer for Meng said "serious concerns" have been raised given the case’s “political character,” “motivation,” and “comments by the U.S. president,” according to SCMP.

Guangzhou should encourage in-restroom business such as commercial advertisements that would contribute to budgets for bathroom improvements, a new local government plan suggested.

Beijing is once again pushing a “toilet revolution” campaign, reportedly pledging as much as 7 billion yuan ($1.04 billion) to build and upgrade toilets in rural areas in 2019. However, the campaign policies offer toilet projects in urban areas little in the way of confirmed long-term support – and so the pressure is on cities like Guangzhou to shore up funds for maintenance.

Tuesday, March 12: Momo Inc. is expected to report earnings for its fiscal quarter ended Dec 2018 before the U.S. markets open.

• Tmall gets new head as Alibaba renews its strategy