Could U.S. Targeting of Two China Genomics Firms be Related to Huawei? 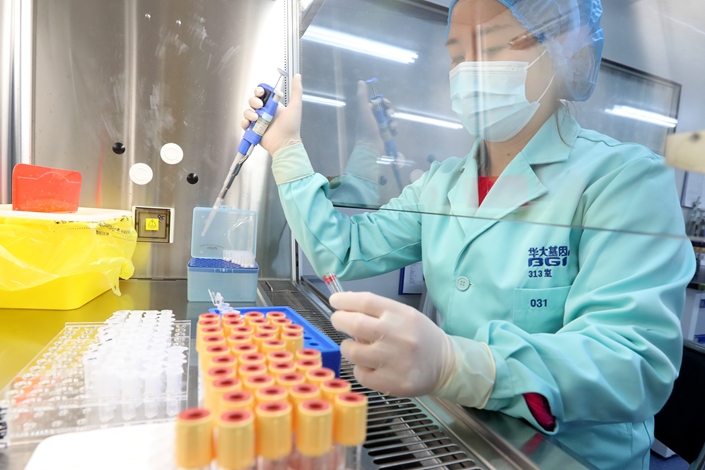 A pair of U.S. senators could be seeking a probe of two Chinese genomics firms that may indirectly get federal money due to their ties to embattled telecom equipment maker Huawei, an analyst said, as one firm called for fair treatment and the other played down its Chinese ties.

The action represents a move into new territory for ongoing trade tensions between China and United States, showing how even an agency that administers health insurance programs “has become politicized,” said Steven Weber, a political science professor at the University of California, Berkeley. Accusations of forced technology transfers and other Chinese attempts to obtain proprietary U.S. technology have been a major point of contention from U.S. President Donald Trump in the ongoing trade war between the world’s two largest economies.

BGI Group and WuXi NextCODE landed in the crosshairs of Marco Rubio and Chuck Grassley last week, when the pair of U.S. senators sent a letter to the Department of Health and Human Services asking for an investigation. The pair expressed concern that the Centers for Medicare and Medicaid Services (CMS), two major federally-funded medical insurance programs, “may be providing payments for genetic testing or analysis to U.S. entities that have domestic partnerships with WuXi, BGI, and other genomics companies with ties to the Chinese government.”

They asked CMS to review its payments to determine whether any of its U.S. partners had ties to BGI or WuXi NextCODE. They also asked to know whether CMS determines national security risk when working with partners that may have ties to China-affiliated companies.

BGI said it hopes it will be treated fairly in the case, and pointed out that it is a private company whose shares are publicly traded, according to a statement provided to Caixin on Monday.

“We believe that the rapid development of genetic technology cannot be separated from the active cooperation of scientists, research institutions and enterprises around the world,” it said. “BGI Group’s related businesses in the United States are strictly implemented in accordance with the contractual terms signed with customers, partners and users, and strictly abide by local laws and regulations.”

WuXi NextCODE noted that it is an “international company” with headquarters in the U.S. state of Massachusetts, in its own statement released last week after the two senators made their initial request. It also noted that the majority of its senior management, including its chairman, CEO and CTO, are U.S. citizens, and the supermajority of its equity interests are held by non-Chinese shareholders.

In the announcement of their letter targeting the two Chinese companies, the two senators specifically noted that both “BGI and WuXi also have publicly touted their partnerships with Huawei to expand genomic analytics,” Weber pointed out. He said the numerous references to Huawei in the letter could mean the actions against BGI and WuXi NextCODE are actually targeting the Chinese telecom giant, which has been under assault in the U.S. since the end of last year.

The U.S. had been investigating Huawei and its CFO Meng Wanzhou for at least the last six years on suspicion that the company, working through another partner, sold American-made products to Iran in violation of U.S. sanctions at that time. It turned up the pressure last December when it requested Meng’s detention while she was transiting through Canada. Since then the U.S. has been trying to have her extradited to the U.S. to face charges.

More recently, the U.S. has also ordered Huawei’s American suppliers to stop selling their products to the Chinese company as punishment for violating the anti-Iran sanctions.

“I think it’s a signal of just how deeply D.C. is looking at Huawei in particular,” Weber said. “It’s a full-on assault in that respect — not just Huawei but increasingly companies that connect with Huawei, supply Huawei, are customers of Huawei.” Weber added that CMS will probably be forced to open an investigation after receiving the letter, and that he “wouldn’t be surprised” if the U.S. agency ultimately ended up suspending its relationship with its current partners that have relationships with BGI and WuXi NextCODE.

“CMS is certainly used to being buffeted around more than a little by the domestic politics of healthcare, but getting caught in the middle of the China technology supply chain debate is a different animal,” he said.