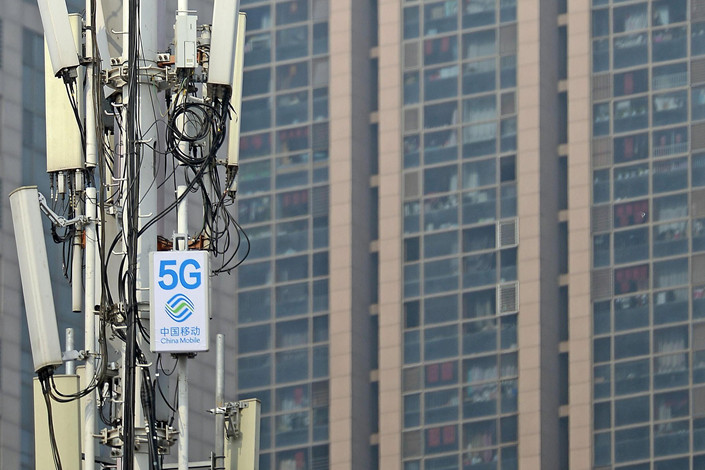 China Mobile, the world’s largest wireless carrier by subscribers, said revenue for its sector declined in the first five months of the year as the industry matures, even as Beijing pressures the company and its two smaller rivals to accelerate their rollout of costly 5G services.

Chairman Yang Jie also said he has mixed feelings about the new sense of urgency to China’s 5G plans, which is forcing his company to tweak its network strategy to focus more on a hybrid of 5G and older 4G to provide service more quickly.

China’s mobile sector has been coming under pressure over the last few years as most of the nation’s 1.4 billion people now have service and Beijing forces carriers to eliminate domestic roaming fees. At the same time, competition has led to falling data prices, though most carriers have offset much of those declines through higher data usage.

After years of growth, China Mobile reported its operating revenue fell 0.3% to 185 billion yuan ($27 billion) in the first quarter of this year, according to its latest earnings report.

“We aren’t afraid of uncovering the ugly truth,” Yang said at an event held in conjunction with a trade show taking place this week in Shanghai. “The entire industry basically stopped posting revenue growth in the first five months of this year. China Mobile has already started posting negative growth, this is an objective fact.”

In remarks at a separate event, Yang also discussed the current situation for China’s rollout of next-generation 5G services. After previous signals that the regulator would issue licenses toward the end of this year, China abruptly gave out commercial 5G licenses in June, including ones for China Mobile, China Unicom and China Telecom.

Industry watchers were expecting the trio to spend most of the rest of this year trialing the technology before launching commercial service next year. But those plans have been accelerated, and China Mobile earlier this week announced a plan to build the “world’s largest 5G network” by setting up over 50,000 base stations across China by the end of the year. By 2020, it added, it expects to offer commercial 5G services in over 200 prefecture-level, more-developed Chinese cities.

Observers believe the recent trade war between the U.S. and China may be driving Beijing to accelerate its plans, as that war has spilled over into the technology sector with several restrictive U.S. actions against Chinese technology firms in recent months. The U.S. is one of a number of countries that has already launched 5G commercial services, alongside others like South Korea and Switzerland.

“In terms of 5G technology, we feel very conflicted,” Yang said at another event.