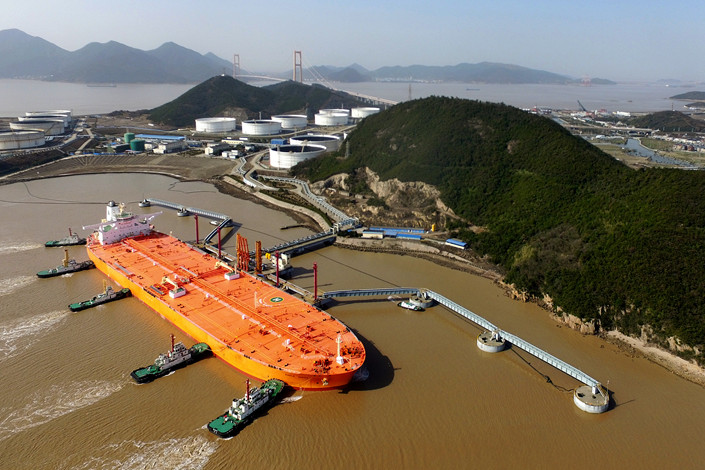 China’s crude oil imports from Saudi Arabia surged in the first half of the year, official data show, while imports from the U.S. plummeted amid ongoing Sino-U.S. trade tensions.

China imported 2.12 million metric tons of crude oil from the U.S. in the first six months of this year, down 76.2% from a year earlier, according to data from China’s General Administration of Customs, on the concerns that the Chinese government would impose tariff on the U.S. oil imports in retaliation for U.S. trade tariffs on Chinese goods.

Oil inflows from Saudi Arabia, on the other hand, hit 37.8 million metric tons in the first half of 2019, up 38.5% year-on-year, making the desert kingdom the largest source of China’s crude oil imports, the customs data show.

Saudi Aramco signed an agreement with Zhejiang Province in February to acquire a 9% stake in Zhejiang Petrochemical’s integrated refinery and petrochemical complex, which started operations in late May. This year, Saudi Aramco is set to provide the refinery with 116,000 barrels of oil per day, or 5.8 million metric tons.

Oil shipments from Saudi Arabia are set to increase further, as the company signed an agreement in February to partner with China’s military equipment producer China North Industries Group Corp. Ltd. and state-owned Panjin Sincen to develop a refining and petrochemical complex in Panjin, Liaoning province. The refinery will require 300,000 barrels of oil per day, with Saudi Aramco set to provide up to 70% of that oil. The refinery is expected to start operation in 2024.

China and Saudi Arabia complement each other in terms of oil and gas supply and demand, said Liu Chaoquan, vice president of Economics & Technology Research Institute of China National Petroleum Corp. Saudi Arabia has been increasing its investments in China’s downstream petrochemical production, in line with the country’s effort to expand oil exports and increase revenues, Liu said.

China’s dependence on imported oil rose to 72% in 2018, the highest in the past half century, according to the Statistical Review of World Energy published by oil industry company BP PLC. China’s oil demand will increase further and peak around 2030, Liu said. However, it will be difficult for China’s domestic production to increase significantly, meaning China’s dependence on imported oil is very likely to increase further in the future, he said.