By Huang Shulun and Timmy Shen 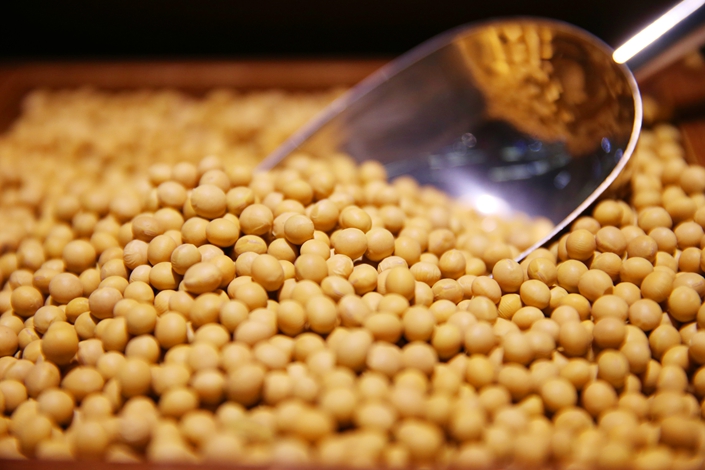 China cut its soybean import forecast for the current crop year to 83.5 million tons, down by 1.5 million tons from July’s projection, according to official data released Monday. Photo: IC Photo

China, the world’s largest consumer of soybeans, has cut its forecast for imports of the legume reflecting the impact of ongoing trade ructions with the U.S., one of its biggest suppliers.

The Ministry of Agriculture and Rural Affairs cut its soybean import forecast for the 2018-19 crop year to 83.5 million tons, down by 1.5 million tons from July’s projection, according to a statement (link in Chinese) released Monday by the ministry. In China, the soybean crop year starts in October and ends in September of the following year.

The U.S. Department of Agriculture (USDA) released a similar projection. “With the arrival of African Swine Fever in China in mid-2018 along with the ongoing trade dispute, a steady decline in China’s soybean import volume has been observed with imports currently forecast to reach 83 million tons in 2018/19,” the USDA said in a report published earlier this month.

In the first seven months of this year, China imported a total of 46.9 million tons of soybeans, down 11.2% year-on-year, according to data (link in Chinese) from the General Administration of Customs.

China is heavily dependent on imports to satisfy its demand for soybeans, which are used to make animal feed, cooking oil, and products such as tofu and soy sauce. As trade friction continues, Chinese companies need to find a way out for alternatives — most likely from South America.

Also, Chinese farmers are going to Russia to grow soybeans for sale in their home market as China increases imports from its northern neighbor. “Expanding soybean imports from Russia is a major agreement reached by the leaders of China and Russia,” Gao Feng, a spokesperson of the Ministry of Commerce, said at a briefing earlier this month. China imported more than 800,000 tons of soybeans from Russia in 2018, up 64.7% year-on-year, Gao said.

Nonetheless, obstacles remain in the way of non-U.S. soybeans truly supplementing demand. One Shanghai-based soybean importer told Caixin that Chinese clients such as soybean oil producers were eagerly requesting South American soybean sources after U.S. partners failed to deliver. The alternative channels, however, are not as smooth, and supplies not stable, the importer said.

Tensions between China and the U.S. flared again in recent weeks. U.S. President Donald Trump announced potential new duties on Chinese products on Aug. 1 even as negotiators had laid plans for further talks, ending a truce he made when he met with Chinese President Xi Jinping in June in Japan. This week, the Trump administration partly postponed the new tariffs on some Chinese imports until mid-December. The U.S. Department of the Treasury last week labeled China a currency manipulator after the yuan broke the psychologically important 7-per-dollar mark. Beijing responded by calling the decision an act of “protectionism.”