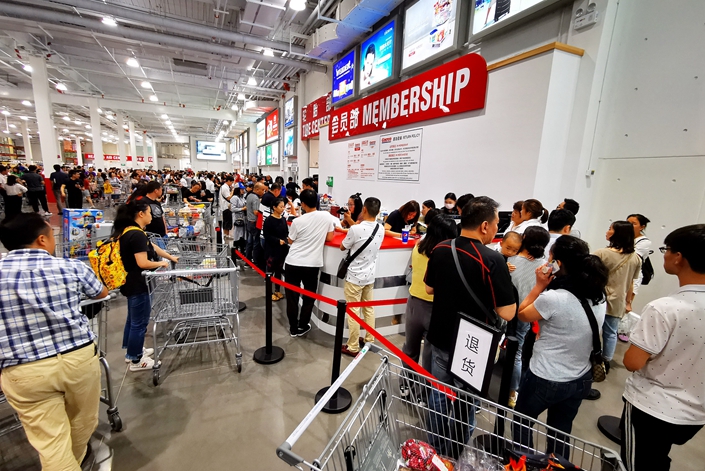 Customers line up Wednesday to return their membership cards at a Costco supermarket in Shanghai. Photo: VCG

There were frenzied scenes at the opening of the first Chinese mainland branch of U.S. wholesale giant Costco in Shanghai last week.

Midway through its first day on Aug. 27, the store had to close early as bargain-hunters created chaos, pushing and shoving their way through the store in search of the best deals.

Items from the chain, which focuses on selling products to its members in bulk at a low cost, have long been sought after by Chinese consumers. Its snacks and brand-name clothes have long been a mainstay for cross-border e-commerce platforms and individual agents known as “daigou.”

The high-profile store opening, which made headlines around the world, comes despite growing trade tensions between the United States and China. The company’s push into brick-and-mortar Chinese retail — five years after it opened an online store in the country — also goes against the tide, as many of its global retail peers are retreating from the country.

But can the hype produce a loyal customer base? A week after the opening, Caixin visited the store in Minhang district, finding that some customers were already lining up to return their membership cards — which will usually cost 299 yuan ($42), but had been temporarily discounted to 199 yuan.

Prices had generally increased since the first day. The shop’s food area was crowded, while the area filled with high-end products that particularly caught the attention of shoppers and the media on the first day —bottles of premium Moutai liquor and designer bags — was nearly deserted, as the discounted stock had sold out.

Costco has 96 million members globally, and membership fees provide it with a stable source of revenue. To attract shoppers, Costco maintains a relatively low gross profit margin of around 11%, compared with 20% to 25% for most of its rivals.

The reporter had to line up for one hour to get into the store after arriving at 1 p.m. on Wednesday, much less than the several-hour wait endured by customers of the first two days.

Caixin found that the chain’s members-only rule was not being strictly enforced, as visitors with no cards were allowed into the shopping area. At the checkout, a nonmember was allowed to pay with their neighbor’s card.

Costco security guards told Caixin that they are not stopping nonmembers from entering at present, as the store-opening offers are still attracting lots of people, but say they may follow the rules more rigidly when traffic stabilizes.

A staff member trying to sell a membership to a visitor said that the chain would soon open a branch in Pudong New Area, where the visitor lives. A nearby bank employee, who was there to promote a credit card, pointed out that the planned Pudong store is scheduled to open in five years.

Costco’s model in North America has been based on families buying bargain products in bulk, transporting them in their cars and then storing them at home. The brokerage said Costco faces a very different market in China, where most city-dwellers prefer to shop frequently and haven’t embraced buying in bulk.