CX Daily: Japanese Financial Giant Daiwa Gets in on the Joint-venture Action 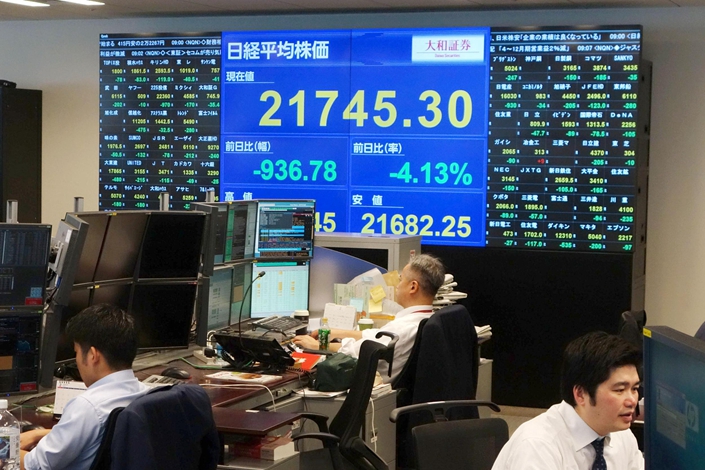 After withdrawing from China five years ago, Japanese financial giant Daiwa Securities Group Inc. filed an application with the country’s securities watchdog to set up a foreign-controlled securities JV.

Daiwa Securities said it applied to the China Securities Regulatory Commission (CSRC) for a JV with Beijing State-owned Capital Operation and Management Center (BSCOMC) and Beijing Xicheng Capital Holdings Co. Ltd., according to a Wednesday statement on its website.

In November 2018, Daiwa Securities signed an MOU with BSCOMC, an investment vehicle controlled by the Beijing municipal government, to form a securities JV, according to the statement. Daiwa will own 51% of the venture, while BSCOMC and Beijing Xicheng will hold the remaining 49%, the statement said.

Chinese economy weakens across the board, early indicators show

China’s economy continued on a slower trajectory in September, with weakness in manufacturing and retailing combining with the trade war to undercut growth.

Bloomberg Economics’ gauge aggregating the earliest available indicators from financial markets and businesses showed the economy cooling for a fifth month, with indicators for trade, factory prices, and small business confidence all worsening. Rising stock and iron prices boosted those sub-indexes. Although trade tensions have eased somewhat since last month, there’s been no turnaround in global demand in September.

The Ministry of Finance will transfer around 115 billion yuan ($16.1 billion) in state assets to the national social security fund, showing the central government's eagerness to move forward on a policy dating back to 2017 that aims to bolster China’s pension funds as the population ages.

The ministry will transfer 10% of its shares of ICBC and Agricultural Bank of China Ltd. (ABC) to the National Council for Social Security Fund, the government body that manages the national social security fund, according to separate statements from each bank. The banks’ shares being transferred were worth around 115 billion yuan at Wednesday’s closing prices. Under the plan, the ministry is also supposed to transfer a portion of its shares of other state-owned financial institutions to the fund.

For all the efforts to make China’s bonds more accessible to foreigners this year, some global funds are reluctant to own them.

Active money managers like Amundi and BlueBay are cautious on China’s government debt amid concern over liquidity, capital controls and hedging. While foreigners own just a tiny fraction of the world’s second-largest bond market, their opinion may soon hold a little more weight as FTSE Russell is expected to include the bonds in its flagship index.

Coincident management changes in the credit-scoring units of Ant Financial Services Group and Tencent Holdings sparked speculation that the industry behemoths are retreating from the business following the emergence of Baihang Credit Scoring, a central bank-backed rival credit agency.

Zhima Credit, the personal credit-scoring platform of Alibaba Group-backed Ant Financial, recently disclosed that its legal representative Eric Jing, chairman and CEO of Ant Financial, was replaced by veteran executive Qu Yu. Around the same time, Tencent Chairman Pony Ma also departed from the posts of legal representative and executive director of Tencent Credit. Observers said the moves suggest that Ant Financial and Tencent are cutting their bets because of dimming prospects for winning a related business license.

British chip designer ARM Holdings’ business ties with Huawei Technologies are unaffected by the U.S. trade restrictions on the Chinese telecom equipment giant, a company executive said Wednesday, adding that it will continue licensing its chip design architecture to Huawei and HiSilicon.

After an assessment of ARM’s products and its partnership with Huawei, the company concluded that the patents behind its major chip design architectures were based on technologies from the U.K. and thus will not be affected by the U.S. trade ban on business with Huawei and HiSilicon, ARM said. Following the U.S. ban, ARM reportedly suspended part of its business with Huawei to assess the U.S. policy.

There has been plenty of drama at Nio this week as the besieged carmaker once dubbed “China’s Tesla” abruptly canceled a planned Tuesday teleconference with investors after announcing heavy second-quarter net losses.

The call eventually took place Wednesday before market open with executives emphasizing the company’s competitiveness and actions it would take to boost its position. Staff cuts will be key to reversing Nio’s fortunes, CFO Xie Dongying said. We previously reported some 2,000 of the company’s approximately 9,000 employees are potentially facing the sack.

A study from Shanghai-based online auto services platform Lechebang, which surveyed 2,493 dealerships in 320 cities comprising dozens of car brands, found that 44% had a loss during the period from January to June. Only 29% turned a profit, while 27% said they broke even.

Many dealers lacked confidence in their future business prospects, said Lin Jinwen, the founder of Lechebang. China’s overall auto sales dropped 9.9% YOY to 1.59 million units in August, the 14th consecutive month of decline in the world’s largest car market, according to data from the China Association of Automobile Manufacturers.

Baidu plans to sell 31.3 million American depositary shares (ADSs) in major travel-service platform Ctrip, each of which represents 0.125 of one of the travel site's ordinary shares, according to Ctrip’s filing Wednesday. This tranche of ADSs represent at least 30% of Baidu’s total stake in Ctrip and are worth around $1 billion, according to our calculations based on Ctrip’s latest share price.

Baidu has held a stake in Ctrip since it merged with Baidu-backed rival Qunar in 2015. At present, Baidu owns just under 20% of Ctrip. Research house Jefferies said that upon the completion of the deal, Baidu will remain Ctrip’s largest shareholder and be granted “greater strategic flexibility” thanks to cash gained in the transaction.

Battery giant CATL to build $1.4 billion production base in Sichuan