By Isabelle Li and Peng Yanfeng 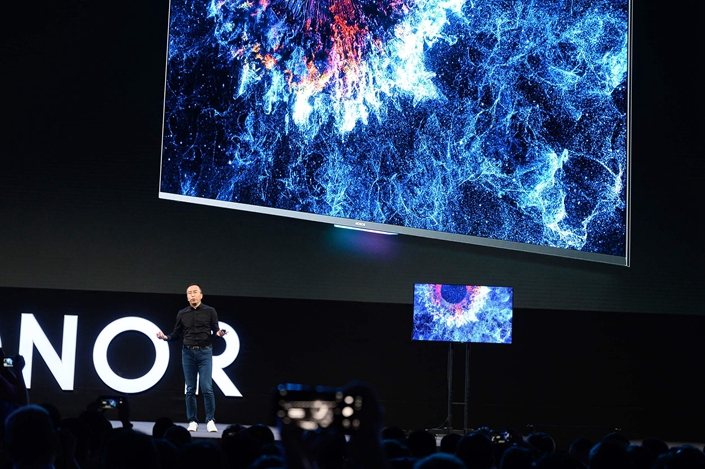 The day after Huawei Technologies Co. Ltd. unveiled its answer to Google’s Android — a self-developed open-source operating system dubbed “Harmony OS” — the Chinese telecom giant debuted its first smart television that used the operating system, which it has insisted on branding as a “smart screen.”

The announcement confirmed rumors that had been swirling since the start of the year. The pair of 55-inch smart TVs, the Honor Vision and the Honor Vision Pro, went on sale Aug. 15, each priced at 3,799 yuan ($540) and 4,799 yuan respectively.

The release of the smart TVs shows Huawei’s ambition to create a lineup of internet-connected gadgets that run its self-developed operating system. Huawei’s operating system Harmony and HiLink, its smart home network platform launched in 2015, will allow its products including smartphones, tablets and laptops to interact with its new “smart screens,” said Zhao Ming, president of Huawei’s consumer electronics brand Honor.

It makes sense for Huawei to enter the smart TV business, according to home electronics analyst Liu Buchen. Huawei has already been selling a variety of consumer electronics, and TVs only get it closer to its goal of creating a lineup of internet-connected devices, which the industry calls the internet of things (IoT). “I’m a firm believer that the TV will not only become the center of our smart home, but also the center of our daily smart social hub,” Liu said.

By 2023, the shipment volume of smart devices in China will reach nearly half a billion, according to a projection by industry data provider IDC. As next-generation technologies such as 5G networks, artificial intelligence and cloud computing evolve, the makers of smart home devices are poised to take advantage.

“For Huawei’s founder, Ren Zhengfei, all of Huawei’s business centers on building a pipeline for ‘information flow,’” another telecom veteran told Caixin in January. “In the 5G era, everything will be connected. The terminals for the streams of information involve not only phones, but also tablets, laptops, speakers, TV sets, and so on.”

Home electronics and smartphone manufacturers in China are now readying to join the fight, extending their product lines to battle for a market worth 168.33 billion yuan last year — according to market consultancy Analysys — and projected to grow to 195 billion yuan in 2019.

Huawei’s foray into home electronics is like a giant fish in the river, stirring up the water and upsetting others who have been in the area for some time. “Huawei’s entry may to some extent change the status quo of overly low margins in the TV manufacturing industry. It may even bring some renewed vigor to the smart home business,” an executive at a traditional TV-maker told Caixin.

But the giant may also make thing “tougher” for other manufacturers, he added.

Since Huawei announced its TVs on Aug. 10, several others have followed suit.

A week later, electronics-maker TCL Corp. unveiled its own internet-connected smart screen that can control a wide range of home electronics and appliances — from smart speakers and washing machines. The function will essentially make a smart TV a “big-screen smartphone” and draw younger consumers back to TVs, executive Wang Cheng said at a company event in August. Three days later on Aug.19, veteran TV-maker Hisense Group Corp. released its “social-network TV,” which is also capable of connecting and interacting with multiple other devices.

Following the current, Xiaomi Corp.’s launched the first TV under its lower-end Redmi brand on Aug. 29, and phone-maker OnePlus’s smart TV — the company’s first such product — went on sale in India in September.

A Xiaomi staff member told Caixin that growth in the home electronics business, with TVs leading the way, has exceeded expectations inside the company. The company’s key goal in the smart home business is to maintain its existing edge in the television market while following up with more popular household products for its consumers, including air conditioners and washing machines.

OnePlus also sees smart TVs as a game charger for the home electronics business. “Just as we thought smartphones would forever change people’s lifestyle and habits, whether it be the way we stream videos and play games on-the-go, we stepped into the era of the IoT,” OnePlus CEO Pete Lau was quoted as saying in a company statement in late August. “This shift may greatly impact the way we think about the future of our smart homes. I’m a firm believer that TV will not only become the center of our smart home, but also the center of our daily smart social hub.”

For Huawei itself, the Honor smart screen is just the first step. The electronics giant is dedicated to the new track. Besides Honor, it also plans to launch two bigger models, 65-inch and 75-inch, as its new smart screen products under its own eponymous brand, Caixin has learned.