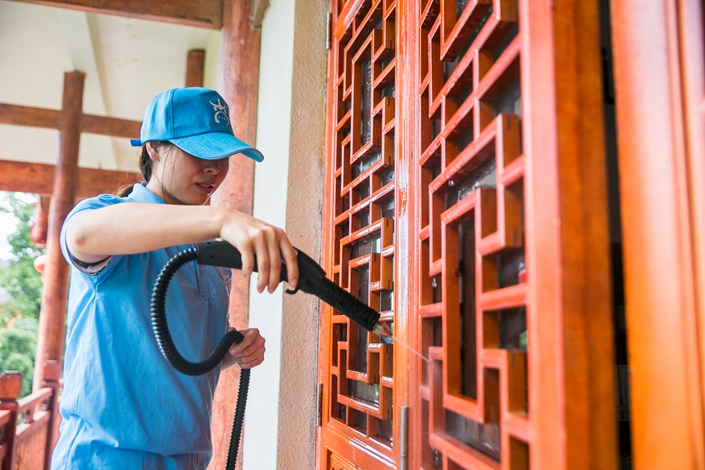 The Caixin China General Services Business Activity Index fell to 51.3 in September from 52.1 in the previous month, indicating that China's services sector expanded at the slowest rate in seven months, even as new business increased at the fastest pace in 20 months.

The Caixin China Composite Output Index, which covers both manufacturers and service providers, inched up to 51.9 in September from 51.6 in the previous month, in part driven by faster growth in the manufacturing sector. Readings higher than 50 indicate expansion.

Total new business orders placed with services providers rose in September at the fastest pace since January 2018, driven by new products and firmer customer demand, according to the survey. New export business expanded at a slower pace than the previous month. This reflected that growth in new business was mainly driven by domestic demand, an analyst said.

The operator of Hong Kong’s stock exchange abandoned its efforts to take over the London Stock Exchange Group (LSE), withdrawing before a Wednesday deadline requiring it to put forward a full, formal offer.

The unsolicited bid, first announced Sept. 11, was rejected outright by the board of the London exchange, which said it saw “no merit” in holding talks over the deal. Hong Kong Exchanges & Clearing Ltd. (HKEx) said Tuesday that despite discussions with regulators and shareholders, it was unable to “engage” with the management of the bourse. As a result, it decided not to proceed with the proposal, HKEx said.

Liu He to visit Washington as high-level trade talks resume

Chinese Vice Premier Liu He will visit Washington from Oct. 10 to 11 for a fresh round of high-level trade talks with the U.S., state-run Xinhua News Agency reported Tuesday.

Liu, who is China’s top trade negotiator, will meet U.S. Trade Representative Robert Lighthizer and Treasury Secretary Steven Mnuchin. Members of the Chinese delegation also include Commerce Minister Zhong Shan and PBOC Governor Yi Gang. This will be Liu’s 13th round of trade talks with the U.S. government, and his third since negotiations broke down significantly in May precipitating further escalations in the trade conflict.

The EU is being urged to copy China’s BRI to better channel the billions of euros in aid it sends to Africa each year in a report that highlights both Africa's explosive population growth and climate crisis that will result in “intense and disorderly migratory pressures” toward Europe in the years ahead.

The proposal for a single institution to deal with all aid to the continent is part of a report on the bloc’s external lending strategy circulated to EU diplomats and is due to be presented to the bloc’s finance ministers later this week. It includes the establishment of a “European Climate and Sustainable Development Bank” to consolidate the bloc’s development funding activities.

Jim O’Neill: The issue behind our issues

The National Basketball Association (NBA) tried to defuse a fast-growing furor in its most important overseas market over a weekend tweet in support of Hong Kong protestors by Houston Rockets team General Manager Daryl Morey.

The NBA said that it is “regrettable” that Morey’s tweet offended Chinese fans and that it wanted to be a "unifying force to bridge cultural divides." Nevertheless, some of the NBA's major business partners, including the Chinese Basketball Association (CBA), said they would suspend business ties with the Rockets. The NBA has a host of licensing and retail deals in China, including a $500 million pact with Tencent Holdings Ltd. and a 30-plus-years partnership with state-run broadcaster CCTV.

Volvo Cars and Chinese parent company Geely plan to merge their internal combustion engine operations into a stand-alone company, a step the Swedish automaker says will cut costs as it shifts to a fully electrified lineup.

The combined venture would supply 2 million diesel and gasoline-powered engines, compared with the 600,000 Volvo produces today, giving the two companies more scale to reduce materials costs. It could also supply other car manufacturers, though none have expressed interest yet, Volvo Chief Executive Officer Hakan Samuelsson said.

The factory, located in the southern city of Huizhou, followed the shuttering of two other manufacturing bases in Tianjin and Shenzhen last year. It employed 6,000 workers and produced 63 million handsets in 2017, Reuters reported, citing South Korean media. Samsung has faced an uphill battle in China in recent years as domestic smartphone players have slashed its market share from 15% in 2013 to 1% earlier this year.

Grab recently formed tie-ins with a series of Chinese companies, including online insurance group ZhongAn and health care service provider Ping An Good Doctor, which would allow Southeast Asian users to purchase insurance and access medical-related services such as consulting doctors online and purchasing medicines through the Grab app.