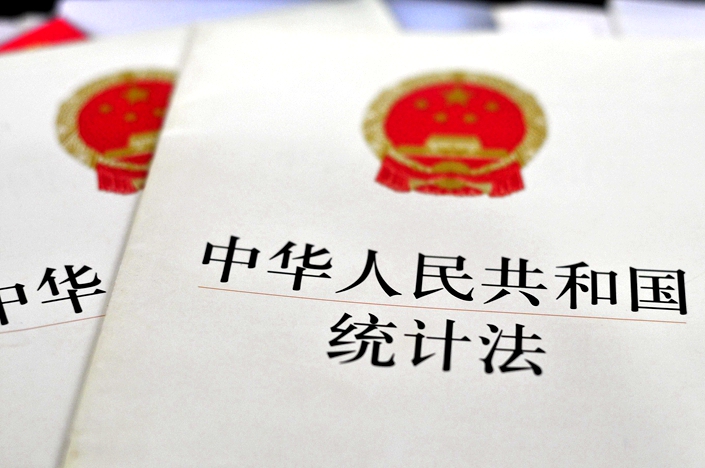 The Statistics Law was last revised in June 2009 and the changes implemented from January 2010. Photo: IC Photo

China is preparing the first revision to its statistics law in a decade in an effort to stamp out data falsification and give senior officials across the country greater responsibility for ensuring the authenticity of economic figures.

Data manipulation and fabrication is stipulated as a “dereliction of duty” in a draft (link in Chinese) of the proposed changes which was posted on the website of the National Bureau of Statistics (NBS) on Tuesday and is open for public comment until Nov. 9.

Among the proposals are the establishment of accountability mechanisms at all levels of government — starting at county level — to prevent and punish anyone caught falsifying data, including the senior officials in charge of the transgressors. The government will encourage the use of technology including big data, cloud computing and artificial intelligence to improve statistical work, according to the draft. A credit-rating system is also being put forward which will apply not only to government officials but also companies and organizations who contribute information to the NBS to act as a further incentive to improve the accuracy of data.

“The law is being revised at this time to build a modern statistical survey system for the new era improve the accuracy, integrity and timeliness of statistical material, and give full play to the important, comprehensive and fundamental role of statistics in economic and social development, and promote high-quality development,” the NBS said in a statement.

The Statistics Law was last revised in June 2009 and the changes implemented from January 2010.

The draft of the amendments to the Statistics Law doesn’t specify punishments for officials but fines for public institutions and companies submitting inaccurate or incomplete data will be 1% to 3% of the difference between the originally reported figure and the revised, true figure. If there is no relevant value, the fine will amount from 100,000 yuan ($14,041) to 500,000 yuan.

The amendments published this week mark the latest efforts in the government’s long-standing campaign to improve the accuracy and reliability of its statistics in the face of widespread concerns about the quality of Chinese data and the propensity of local governments to falsify numbers to meet their targets. Calls have been growing for measures to stamp out fraud due to the serious consequences it could bring for economic policymakers who may be misled by inaccurate data.

The head of the NBS, Ning Jizhe has been outspoken in his condemnation of data manipulation — in a commentary in the People’s Daily in December 2016, he described improving the reliability of government figures as the “lifeline” and “core task” of statistical work. He pledged to harshly punish acts of data fabrication to “strengthen the credibility of the party and the government” and provide “solid quantitative bases” for policymaking.

The NBS has consistently stated that overall, on a national basis, its economic data is accurate and reliable, but it has regularly exposed local governments for falsifying numbers. In September 2018, the bureau named cities in five provincial-level areas that helped about 200 enterprises report figures that turned out to be “seriously exaggerated.”

The National Audit Office has also uncovered widespread manipulation of fiscal data. In a report published in December 2017, it revealed that 10 cities and counties in Chongqing and Yunnan in the southwest, Jilin in the northeastern rustbelt, and Hunan in Central China inflated their fiscal revenues by more than 1.5 billion yuan in total.

But despite regulations forbidding data fabrication, the situation has not improved sufficiently, Yin Zhongqing, vice chairman of the Financial and Economic Affairs Committee of the NPC, said at a press conference (link in Chinese) during the annual meeting of legislature in March. He pointed specifically to the unusual situation where the sum of individual provinces’ GDP was greater than the official national GDP. He attributed the phenomenon to regional officials inflating their numbers, and said the practice had damaged public confidence in official statistics. Yin also called for tougher punishment of officials found manipulating the data.

“Fraudulent data persists despite repeated crackdowns,” he said. “The credibility of [Chinese] data is a long-standing issue.”

The NBS has over the last few years taken measures to improve the accuracy and quality of its data and this year took over responsibility for calculating provincial GDP growth.

Last year, the bureau stopped publishing the nominal value of infrastructure investment, traditionally seen as a critical measuremens of overall investment, stating that it was overhauling the way it calculated the data and feared continued publication could lead to confusion and misleading comparisons.