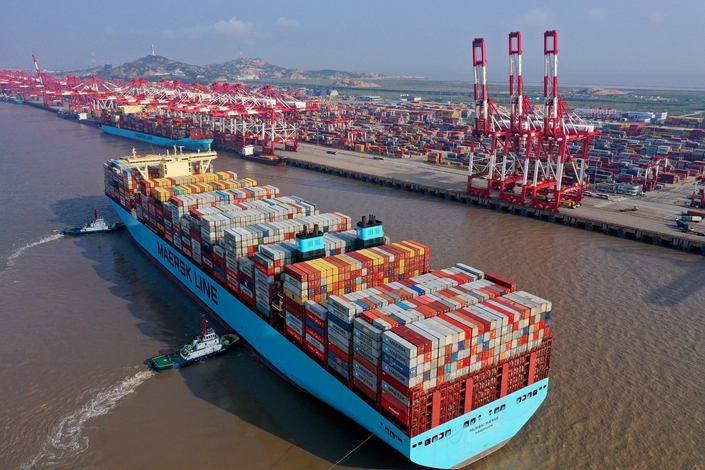 China’s exports and imports both contracted further in September, official data showed Monday. Economists pointed to U.S. tariff hikes and sluggish domestic demand as the reasons for the decline.

In dollar terms, goods exports declined 3.2% YOY to $218.1 billion last month, according to customs data. The reading was worse than both economists' average forecast of a 2.8% decline and August’s 1% drop.

China’s biggest twice-yearly trade fair, known as the Canton Fair, is scheduled to open Tuesday, but organizers expect “greater pressure” on expected attendance amid a slower global economy and a prolonged trade war with the U.S.

The China Import and Export Fair, held every spring and fall in the southern city Guangzhou, is widely seen as a barometer of China’s foreign trade. Based on registration, hotel and flight reservation data, the number of buyers coming to the fall session of this year’s Canton Fair is expected to be under pressure, said Xu Bing, spokesperson of the Canton Fair and deputy director general of the China Foreign Trade Centre, organizer of the fair.

Xu didn’t disclose how many potential buyers have registered, but a declining trend appeared in the spring fair in April. The number of buyers attending the spring fair fell 3.9% from a year earlier to 195,500.

The impact of two multi-billion yuan fraud cases exposed in 2017 involving second-tier Chinese lenders continues to reverberate, with three senior bankers fined and two given formal warnings by the regulator.

The former chairman of China Guangfa Bank Co. Ltd., Dong Jianyue, and former president, Li Mingxian, were given administrative warnings for mismanagement related to the fabrication of guarantee documents on 1 billion yuan ($141 million) of bonds that went into default and for compliance failures, the CBIRC said in a statement Oct. 11.

The CBIRC’s latest announcement also named three former senior executives at Shanghai Pudong Development Bank Co. Ltd. (SPDB) who were warned and fined over a case involving the lender’s branch in Chengdu, Sichuan province, where an investigation in 2017 found officials had falsified loan deals and hidden nonperforming assets through a complex web of shell companies that were granted credit lines totaling 77.5 billion yuan.

China's Ministry of Finance indicated it will scrap all subsidies for hydrogen fuel cell cars by the end of 2020 as planned, bringing their treatment into line with other types of new-energy vehicles (NEVs).

The ministry signaled the move in an official response issued in late September to Chen Hong, chairman of SAIC Motor, in his capacity as a deputy to China’s top legislature.

Automation specialist gets turbocharge from campaign to eliminate toll booths

A top supplier of equipment that allows cars to automatically pay highway tolls without stopping expects its profits to soar by a factor of more than 200 in this year’s third quarter, fueled by demand under a Beijing campaign to eliminate all toll booths by the end of 2020.

Shenzhen Genvict Technologies Co. Ltd., whose main staples include on-board tags that cars use to have tolls deducted electronically, said it expects its third-quarter profit to rise by a factor of between 214 and 256 from the year-ago period, according to a statement filed with the Shenzhen stock exchange late Sunday.

The bullish forecast sparked a rally for Genvict’s China-listed shares, which rose by the daily 10% limit Monday. The stock has rallied 25% since late September as investors expect the company to gain major new business from the Beijing campaign.

Jia Yueting, the embattled Chinese entrepreneur who rose to fame as an early adopter of online video services, has filed for bankruptcy after several years of being chased by a large number of creditors.

As part of the Chapter 11 bankruptcy filed by Jia in the U.S., he will set up a “creditor trust” to start to pay back his many debts, according to a statement posted by Faraday on Monday in China. That trust will receive all of Jia’s equity interest in Smart King Ltd., the global holding company that runs Faraday Future, the electric-car startup he founded.

Internet behemoth Baidu is transferring part of a research and development unit for its autonomous driving project, Apollo, from the United States to China, the company confirmed to Caixin Monday.

The move will bring Apollo’s products and development work closer to Baidu’s domestic partners and allow them to benefit from the size of the Chinese market and fast-developing industries like the intelligent connected vehicles sector, Baidu told Caixin in a written response to a question about the move.

In September, Baidu announced it started pilot-testing autonomous taxi trips in the central Chinese city of Changsha, although human staff will be on hand to react in case of an emergency.

Tencent didn’t reply to requests for comment, but it is expected to resume all NBA games eventually, according to people familiar with the matter.