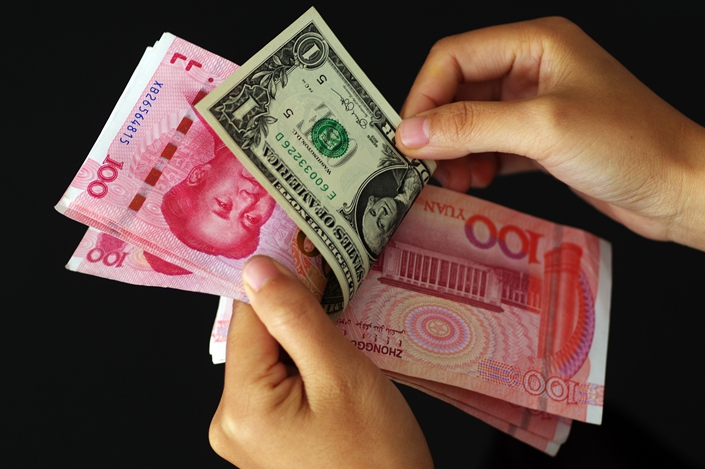 During trading on Tuesday, the currency broke through the 7-yuan-to-the-dollar mark for the first time since Aug. 5. Photo: IC Photo

The Chinese currency strengthened past the fundamentally unimportant, yet psychologically significant, mark of 7 yuan to the dollar this week as it continued its month-long rally on hopes of a trade truce between China and the U.S.

The onshore yuan appreciated to 6.9732 yuan to the U.S. dollar Thursday afternoon, according to Bloomberg data. The yuan has strengthened 2.9% against the greenback since hitting a recent weak point of 7.1789 per dollar on Sept. 3.

Gao Feng, a spokesperson for the Ministry of Commerce, said Thursday (link in Chinese) that after the past two weeks of negotiations, leading trade negotiators from both sides had agreed to phase out existing additional tariffs as the trade deal progresses.

During trading on Tuesday, the currency broke through the 7-yuan-to-the-dollar mark for the first time since Aug. 5.

“The major driver of the yuan’s exchange rate is the progress of the China-U.S. trade talks,” said Liu Jian, a finance researcher at Bank of Communications.

The yuan’s appreciation over the past few days resulted from growing investor confidence that the two countries are willing to reach a partial trade deal as downward pressure builds on the U.S. economy and as the U.S. presidential election approaches, Liu said.

China and the U.S. made “substantial” progress in the talks last month, U.S. President Donald Trump said at the time. His administration has agreed not to proceed with a planned tariff increase on $250 billion of Chinese goods, and China has promised to purchase enormous quantities of American agricultural products and to further open up its financial sector.

China’s commerce ministry has said that both sides are working on the text of the partial trade deal. Multiple U.S. media outlets reported Wednesday that the signing of the deal could be delayed until December as discussions continue about terms and venue.

On Aug. 5, the yuan weakened past 7 to the dollar, heading for a record monthly plunge as Trump threatened more tariff hikes and China vowed retaliation. That same day in the U.S., Washington branded China a currency manipulator and accused Beijing of creating an “unfair competitive advantage” by letting the yuan depreciate. The Chinese government denied the allegations.

After a while, however, the yuan has gradually regained its strength against the American currency as each country offered the other a goodwill gestures and held another round of talks in Washington, where concessions were made.

Even with the yuan’s appreciation, some analysts have argued that it is too early to be optimistic. Zhou Hao, an economist of Commerzbank AG, noted that investors have frequently made incorrect predictions about the trade talks.