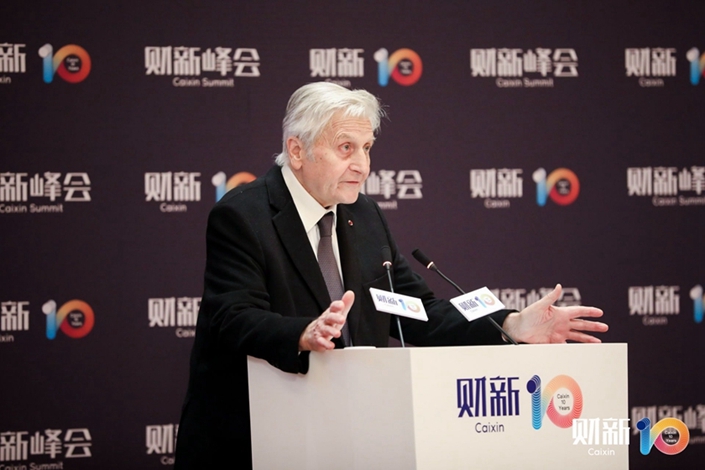 The former head of the European Central Bank (ECB), Jean-Claude Trichet, added his voice to growing concerns among international policymakers about the disruption cryptocurrencies such as Bitcoin could inflict on the international financial system, describing them as speculative and lacking the necessary characteristics of a real currency.

But as increasing numbers of central banks investigate issuing their own digital currencies which, unlike cryptocurrencies, are regulated by the state, Trichet supported the idea of a global digital currency backed by the International Monetary Fund’s (IMF) own reserve asset, the Special Drawing Rights (SDR). The value of the SDR is based on a basket of currencies comprising the U.S. dollar, euro, yen, British pound and yuan.

Speaking at the 10th Caixin Summit in Beijing on Sunday, Trichet said that using the SDR as the reserve asset that backs an international digital currency would be a good choice because it would help promote its use in the private sector.

“I have great doubts of keeping control of monetary value in (the cryptocurrency) domain,” Trichet said. “In the so-called new stable international currencies … the SDR would be the right basket.”

The IMF has for several years tried to carve out a broader international presence for the SDR and Zhou Xiaochuan, the former governor of the People’s Bank of China (PBOC), has long supported expanding its use. A bigger role for the SDR would help the rest of the world decrease its dependence on the U.S. dollar, which currently acts as the world’s de-facto reserve currency.

Mark Carney, the governor of the Bank of England, gave a speech in August in which emphasized the need to reduce the dominance of the dollar and, given the growing use of technology in cross-border payments, he raised the possibility of a new multi-currency global digital currency that could be provided through a network of central bank digital currencies.

In a research paper published in 2018, the IMF said that new technologies could help kickstart broader adoption of the SDR although it acknowledged that some fundamental political and economic challenges would have to be overcome first.

Echoing the concerns of many current and former monetary officials, Trichet said he was worried that a private international cryptocurrency outside of regulators’ control, such as Facebook Inc.’s Libra, would disrupt the global financial system. “The cryptocurrency is totally anonymous and is contradictory to the basic ideas against criminal activities like money laundering and terrorism financing,” he said.

The cryptocurrency itself is not real, and lacks the characteristics that a currency must have, he said. “Even if the cryptocurrency is supposed to be based on underlying assets, I am observing a lot of speculation.”

Financial regulators around the world have been giving much tougher scrutiny to cryptocurrencies, which are created based on blockchain technology. China banned the issuance and trading of cryptocurrencies in 2017 and shut trading platforms, citing the risks of illegal fundraising. Regulators in the EU and U.S. have not outlawed cryptocurrencies like Bitcoin, but have warned of risks including their use for criminal activities and tax evasion.

Facebook’s announcement in June that it was planning to issue a cryptocurrency called Libra, prompted central banks around the world, including China, to speed up their research into issuing state-backed digital currencies. An official from China’s central bank said in August that the PBOC would soon release a digital currency of its own. Reuters reported last week that EU has issued a draft document urging the ECB to consider issuing a public digital currency.

Libra would allow users to make payments and transfer money through third-party digital wallets or Facebook’s own wallet. Unlike Bitcoin, Libra would be what’s known as a stablecoin, a cryptocurrency that is backed by a basket of real assets to make it less volatile.

But Libra is facing growing scrutiny from regulators around the world. A report published in October by a working group on stablecoins under the G-7, an organization of the world’s biggest advanced economies, said no global stablecoin project should begin operation until the legal, regulatory and oversight challenges and risks are adequately addressed.