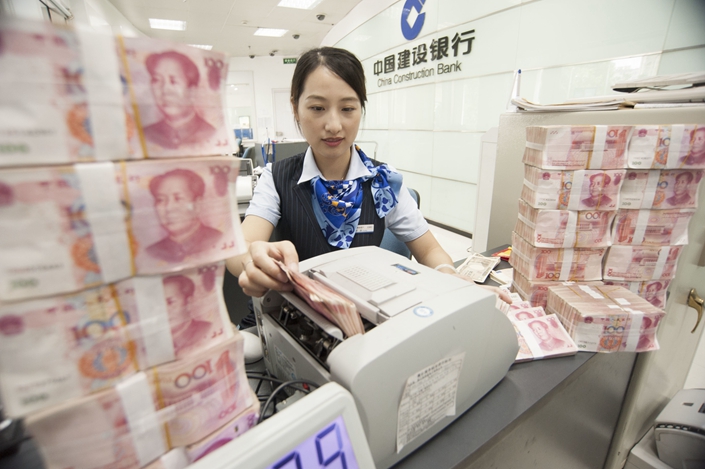 Two major Chinese banks have been named and shamed after they forced small businesses to buy insurance products as a condition for getting loans in violation of official guidelines to cut borrowing costs for millions of companies nationwide.

The transgressions found at some Beijing branches of China Construction Bank Group Ltd. (CCB), one of the big five state-owned commercial lenders, and Ping An Bank Co. Ltd., were highlighted in statements issued Monday by the State Council, China’s cabinet, and the China Banking and Insurance Regulatory Commission (CBIRC). They follow a special investigation by the State Council and unannounced spot checks by the watchdog that were prompted partly by complaints made to the State Council via its website.

“Banks should refrain from any behaviors of adding unreasonable conditions when issuing loans to small businesses,” the CBIRC said in its statement, which was dated Nov. 15.

Lowering costs for businesses, including interest rates, and alleviating the funding difficulties of small companies have been key planks of government strategy for the past few years in an effort to support economic growth. Small and privately owned companies are often disadvantaged in a system that favors state-owned enterprises who are seen as less risky. The policy has taken on added urgency this year amid sluggish domestic and global demand, and the ongoing trade war with the U.S.

Banks have been told to boost credit to small businesses this year. Outstanding loans by the “Big Five” commercial lenders to small businesses — defined as those with total credit lines lower than 10 million yuan — stood at 2.52 trillion yuan ($359 billion) at the end of September, up 47.9% compared with the end of 2018, Zhu Shumin, a vice chairman of the CBIRC, said at a briefing last month. But the commission’s investigation and the naming and shaming by the State Council suggest that banks have found other ways to make money from smaller companies that they see as more risky customers.

Loan officers at Beijing branches of Ping An Bank were also found to have forced individuals to buy life insurance when taking out a loan for business purposes. They threatened to raise interest rates on the loans if borrowers refused to buy the insurance and linked the maximum size of the loan to the value of the insurance purchased, the CBIRC said in its statement.

A senior manager with a private pharmaceutical company based in Beijing, who agreed to be identified only by his surname, Li, told Caixin on Tuesday that it is common for banks to list conditions before they issue loans to small companies, such as asking them to open bank accounts for their staff and to buy asset management products.

In addition to instructing banks to expand lending to small businesses, financial regulators are using monetary policy tools to cut borrowing costs. China’s central bank this week cut the interest rate on its reverse repurchase agreements used in open-market operations, lowered the rate on medium-term lending facility earlier in November, and in September cut the amount of cash lenders must set aside as reserves. Economists at Nomura International (Hong Kong) Ltd. said they expect the government to make further cuts to interest rates and target a bigger fiscal deficit in 2020 amid increasing concerns about the downward pressure on economic growth.

Wu Gang contributed to this story.