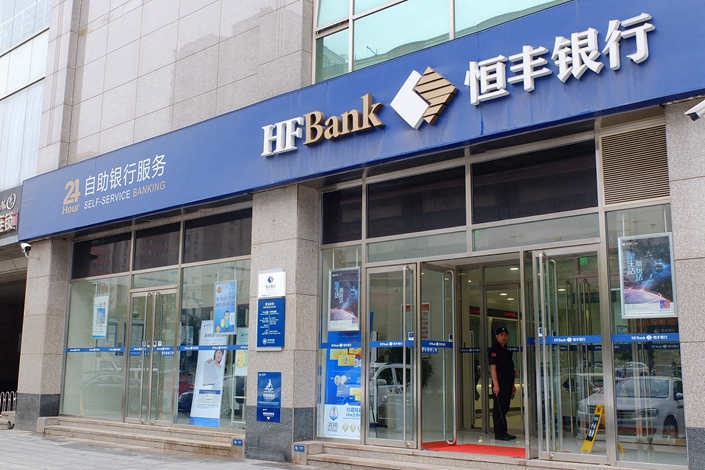 Hengfeng Bank is the third commercial lender in China to receive state assistance since May.

Hengfeng Bank Co. Ltd.’s planned 100 billion yuan ($14.27 billion) private placement will allow the Shandong provincial government to take control of the troubled bank, thanks to a side deal with the leading investor in the new shares, Caixin has learned.

The deal indicates that the Shandong government, rather than the central government, will take the lead in the cleanup of the troubled bank.

According to the private placement plan (link in Chinese), Central Huijin Investment Ltd., an arm of China’s sovereign fund, China Investment Corp., has signed up to buy 60 billion of the 100 billion shares that the struggling Shandong province-based lender announced it would issue, giving Central Huijin a nearly 54% stake.

An asset management firm controlled by the provincial government has subscribed to 36 billion shares, which would give it a 32.4% stake, according to the private placement plan. Singapore’s United Overseas Bank Ltd. and other investors have agreed to buy the remaining 4 billion shares. The bank didn’t disclose the price of the private placement, but Caixin has learned from multiple sources that the shares will be priced at 1 yuan each.

The plan is still subject to approval by the China Banking and Insurance Regulatory Commission (CBIRC).

Under the plan, Central Huijin would hold a majority stake in Hengfeng Bank. However, the Shandong asset management firm has made a deal with Central Huijin to purchase half, or 30 billion, of the latter’s shares within three years, Caixin has learned from multiple sources. The deal also allows the Shandong provincial government to be the actual controller of the bank after the private placement.

Hengfeng Bank is the third commercial lender in China to receive state assistance since May, following the takeover of Inner Mongolia-based Baoshang Bank Co. Ltd. and the restructuring of Liaoning-based Bank of Jinzhou Co. Ltd.

Hengfeng Bank ran into trouble in 2016 when several news publications reported that an unnamed whistleblower had accused top executives of embezzlement. The whistleblower accused Cai Guohua, who was the bank’s chairman from 2013 to 2017, and others of misappropriating millions of yuan, a charge later repeated by the bank’s former president, Luan Yongtai.

A senior official with the Shandong government told Caixin that during Cai’s tenure as chairman, he claimed an average of around 400,000 yuan in expenses for reimbursement each day, and the bank had spent about 300 million to 400 million yuan on this alone.

Hengfeng Bank had 1.2 trillion yuan in total assets at the end of 2016, according to its annual report (link in Chinese) for the same year, the most recent one it released. The bank now has nearly 140 billion yuan of nonperforming loans, from which it can probably recover about 80 billion yuan, Caixin has learned. The eventual loss of around 60 billion yuan is equivalent to the amount that Central Huijin is set to inject into the bank.

To clean up the bank’s bad assets and reorder its shareholding structure, Hengfeng Bank has devalued its net asset value per share to 1 yuan from 5.6 yuan in 2016, the sources said.

The bank has also downsized, cutting the number of departments at its headquarters to 32 from 67 in an effort to reduce redundancies, Caixin has learned from a source at the bank.

In the 2019 China Financial Stability Report (link in Chinese), which was released last month, the central bank said that it rated 4,379 financial institutions in the banking industry on their levels of risk in the fourth quarter of last year. The ratings were done on a 10-point scale, with 10 representing the highest risk level. Of 4,355 small and midsize banking institutions, nearly 590 got ratings of eight or higher, the report said; and one has been closed down or taken over.

Denise Jia and Liang Hong contributed to this report.