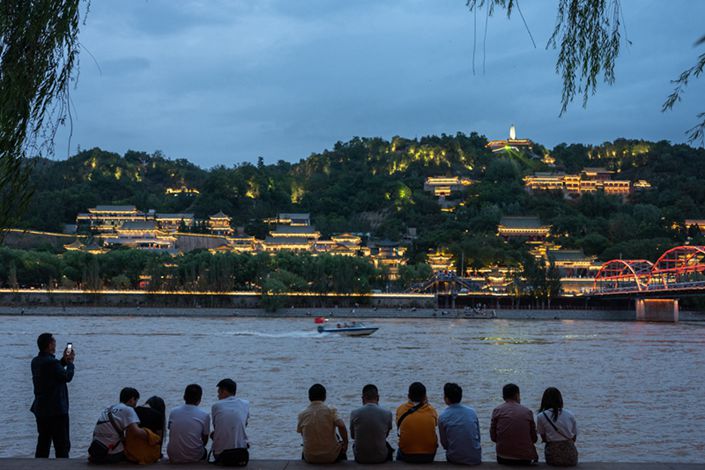 On an evening evening in May, people in Lanzhou flock to the banks of the Yellow River to enjoy the cool weather. Photo: Guo Xianzhong/Caixin

Several people from the Yanchangbao neighborhoods around the Lanzhou Biopharmaceutical Plant told Caixin they started showing symptoms including low fever and joint pain around September for unknown reasons. It wasn’t until a Dec. 26 briefing held by the Gansu Provincial Health Commission and the Lanzhou city government that they realized they could have been exposed to brucellosis.

Caixin learned that by the end of February, about 20,000 people in Lanzhou received tests for antibodies for the Brucella bacterium. More than 3,000 were confirmed with positive results. Local authorities said the leak caused by the biopharmaceutical plant contained low levels of bacteria that wouldn’t damage people’s health and would be shed from the human body within six months.

However, Caixin interviews with 40 Yanchangbao residents who tested positive for the disease found that nearly half of them were still suffering various symptoms a year after the leak. Only two of those interviewed were officially diagnosed with brucellosis. Those without doctors’ confirmed diagnoses said they were puzzled about treatment options and the severity of their infection.

Are you a Chinese company outside the finance industry that owns two or more financial institutions? Well, the central government just decided that you are going to have to get registered as a financial holding company to comply with a slate of new rules.

The new rules (link in Chinese), released Sunday by the State Council — China’s cabinet — and the People’s Bank of China (PBOC), aim to bring nonfinancial companies, including Ant Group Co. Ltd., into the financial fold. At a Monday briefing about the new rules, PBOC Deputy Governor Pan Gongsheng noted that “some nonfinancial companies have expanded blindly, causing risks to mount.”

The dollar bonds of state-owned chipmaker Tsinghua Unigroup Co. Ltd. have fallen steeply in recent weeks as investors worried about the money-losing firm’s ability to repay billions in debt coming due in the second half of the year.

The value of a $1.5 billion bond due next year fell nearly a quarter from mid-August to 68.07 cents on the dollar, edging up 0.47% on Friday after 22 consecutive days of decline. Two other bonds due in 2023 and 2028 have seen their dollar values fall by almost one-third this month.

Investors are concerned about the company’s ability to meet its bond obligations in the second half, which amount to $5 billion.

Following the latest government effort to limit the amount of money flowing into property developers’ hands and to curb financial sector risk, an unusual situation has emerged — land sales are slowing even as property sales are accelerating.

Since April, new home sales have been better than expected, largely driven by the release of pent-up demand as the housing market started to recover from the domestic Covid-19 epidemic.

TikTok to partner with Oracle, Walmart as Microsoft deal collapses

Oracle “will serve as the trusted technology provider” in the deal, the American cloud services giant said Monday in a statement. The partnership is part of a proposal that TikTok owner ByteDance submitted to the Treasury Department over the weekend, Oracle said.

TikTok will also partner with retail giant Walmart in e-commerce, Caixin learned from sources close to ByteDance management. It is unclear how the ownership of TikTok will be restructured under the partnerships. Walmart didn't comment.

According to the prospectus, the unit operates independently of JD.com, with the biggest, controlling shareholder being JD.com founder Richard Liu. In the first half of 2020, JD Digits’ revenue reached 10.3 billion yuan with a net loss of 670 million yuan. The company’s revenue and net profit fluctuated widely over the past three years, the prospectus said.

The experiment is part of Beijing’s push for wider adoption and commercialization of the BeiDou Navigation Satellite System in the country’s location service industry, which is expected to exceed 400 billion yuan ($58.5 billion) in value by year-end.

With guidance from the city’s transportation bureau, shared bikes in certain parts of Shenzhen will need to be installed with BeiDou modules, which would display nearby parking spots managed by bike-sharing companies, Caixin has learned. Users will have to park them within virtually fenced parking spots at the end of their trip, disabling the bicycle’s lock until the user puts it in a permitted location.

China is expected to be the biggest purchaser of 5G smartphones in 2020, as the country accelerates the deployment of its 5G infrastructure.

Some 172 million 5G smartphones will be sold in China this year, accounting for about 62% of the global total, according to a report by research firm Canalys, which looked at the combined figures for the Chinese mainland, Hong Kong, Macau and Taiwan. Canalys attributed the expected sales to the rapid commoditization of 5G smartphones on the Chinese mainland and Chinese handset makers’ efforts to launch cheaper phones compatible with 5G networks.