As Pandemic Shutters Cinemas Around the World, China Wins First Global No. 1 Movie

By Liu Peilin and Flynn Murphy 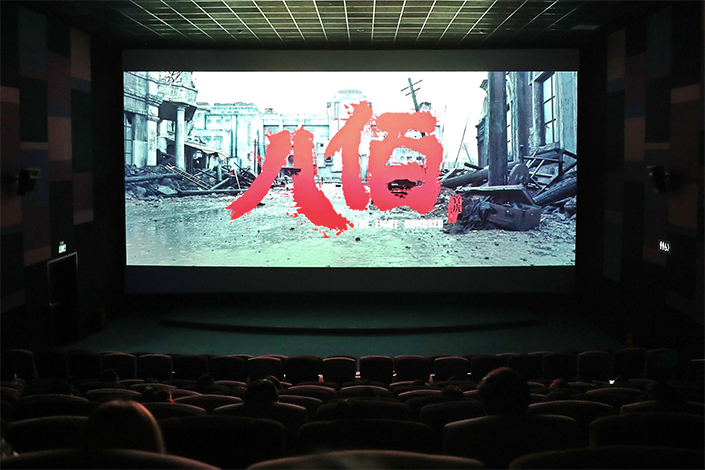 Moviegoers watch the Chinese-made war film "The Eight Hundred” on Aug. 31 in Shanghai.

Now, the gloves are off as the nation prepares for one of its peak box office periods — the National Day holiday beginning Thursday, when people in China splashed out more than 4.4 billion yuan ($645 million) to see movies last year.

By Sept. 21, Chinese war epic “The Eight Hundred,” about a group of soldiers who defend a Shanghai warehouse during the Japanese invasion of the city in 1937, had overtaken the Hollywood flick “Bad Boys for Life” to become the year’s highest grossing film worldwide.

“The Eight Hundred” topped the box office almost every day of the first month it was screened. It has now made more than 3.09 billion yuan, according to Caixin calculations based on data from China’s National Film Office.

After winning each week in China until Sept. 21, it finally relinquished the top spot to “Leap,” a film chronicling China’s national women’s volleyball team with top star Gong Li, which made 168 million yuan last week after it debuted ahead of the National Day holiday.

Meanwhile, even as Hollywood studio Disney insisted it was “very pleased” with “Mulan,” movie fans in both the critical market of China and abroad took a different view.

The live-action remake of the 1998 classic Walt Disney animation based on a Chinese folk tale, which cost $200 million to make, brought in a disappointing 159 million yuan on its first weekend in China, which ended Sept. 13. It took only 87 million the next week, and last week its takings shriveled to just 25 million, according to data from China’s National Film Office.

Dogged by controversy, the film was seen as trying to be all things to all people. It was derided by some as inauthentic, the movie equivalent of American-Chinese restaurant dish General Tso’s Chicken. Meanwhile Disney copped criticism abroad for thanking local authorities in Xinjiang for hosting the production, prompting a boycott movement on social media, and leading to limited promotion of the film in China.

Disney was banking on “Mulan” performing far better in China. In the U.S., the studio decided to make the film available online after coronavirus shut down theaters across the country — the firm’s Chief Financial Officer Christine McCarthy said earlier this month that only 68% of U.S. theaters were open owing to the coronavirus pandemic, and many people were too scared to attend. That contributed to Disney’s decision to release it on its streaming service, for a premium of $30.

China’s box office, the world’s second largest, was tracking to catch up to North America even before the pandemic struck. It finished on top for the first time in the first quarter of 2018 with some $3.14 billion — 42% more than North America for that period — on the back of China’s peak Lunar New Year period.

But after years of breakneck growth it fell into a slump last year due to China’s slowing economy, and a crackdown on celebrity tax violations heralded by the high-profile probe of A-lister Fan Bingbing.

At a conference of Chinese movie executives last year there was much soul searching, and talk of the need to make more sophisticated films. That came after China’s box office suffered a rare decline in the first three months of 2019.

But with China in post-coronavirus recovery mode, patriotic chest thumping seems a reliable bet, based on last year’s takings. Over the seven-day holiday through Oct. 7 last year, Chinese moviegoers spent billions on three nationalistic flicks — “My People, My Country,” “The Captain,” and “The Climbers” — which contributed 97% of ticket sales for the period.

A total of 117 million people went to the movies during Golden Week last year, the first time the number exceeded 100 million during the holiday.

“The Eight Hundred” was released four days before Qixi, held on Aug. 25, which is also known as Chinese Valentine’s Day. Despite falling on a Tuesday, the day’s box office took in 508 million yuan, a single-day record since the prolonged closure of cinemas that began in January. China’s October holiday is expected to top that.

China’s film and television industry has experienced its most punishing year on record, as studios and cinemas alike were shuttered to help contain the spread of Covid-19.

In early February, the concerns were that a collapse in ticket sales over the usually buzzing Lunar New Year holiday — which was overshadowed by Wuhan’s coronavirus lockdown — had seen more than $1 billion lost during the period, or about 10% of China’s anticipated revenue for the year.

The upshot would be far bleaker. According to China’s National Film Office, in the first half of 2020 the nation’s box office took in around 320 million yuan, or about 7% of the figure for the period last year.