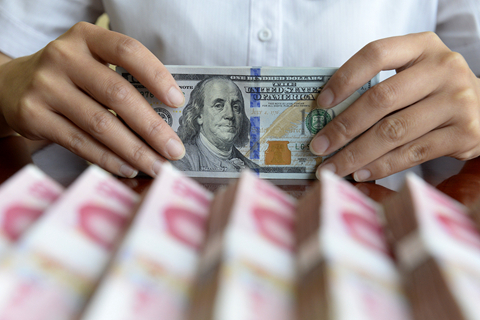 Some lenders in China have already started to omit the counter-cyclical factor from their daily calculations for yuan quotes submitted to the central bank.

China may be getting ready to scrap a key element of the way it sets the daily reference rate for the yuan, known as the counter-cyclical factor, sources with knowledge of the matter told Caixin after several banks stopped using the mechanism introduced three years ago.

Some of the 14 lenders who submit quotes for the U.S. dollar-yuan exchange rate to the China Foreign Exchange Trade System (CFETS), part of the People’s Bank of China (PBOC), every morning before it publishes its fixing have already stopped using the factor in their calculations, the CFETS said Tuesday in a brief statement (link in Chinese), without saying whether the change was permanent.

The sources told Caixin that authorities are planning to do away with the factor, which was introduced in May 2017 after the yuan was under depreciation pressure for more than a year. The details of how the factor is calculated have not been made public, but its aim was to slow any further slide in the currency.

China imports most American oil ever

China’s imports of U.S. crude oil hit a record high of 3.897 million tons in September — around 950,000 barrels a day — as the country scrambled to fulfill the energy import obligations in the preliminary trade deal both countries inked in January.

That represented a year-on-year increase of 652.41%, the highest since records began, and made America China’s fourth-largest source of crude as Iraq dropped to No. 5.

The U.S. is not the only source of crude to see its exports to China spike, as imports from Saudi Arabia and Russia also shot up for the period. China imported a total of 48.48 million tons of crude oil in September, 5% more than the previous month, and a year-on-year increase of 17.6%.

A new cluster of Covid-19 cases spreading in the remote prefecture of Kashgar in far western China was linked to a garment factory designated to lift villagers out of poverty.

The factory is one of many satellite operations set up in 2018 in Shufu county as part of a poverty alleviation campaign. The factory, which makes clothing, curtains and bedding, employs nearly 300 villagers, according to a magazine article published earlier this year.

The first case linked to the garment works was a 17-year-old girl who tested positive Saturday. Although she works at another factory, her parents work at the unit where all the other cases were found or linked to.

Banking sector shares traded on the Chinese mainland closed down 1.5% Wednesday after some lenders reported worse-than-expected financial results for the third quarter.

China has a different approach to digital currency than other countries, Zhou Xiaochuan says

China Duty Free, which controls about 90% of China’s duty-free retail market, said third-quarter sales totaled 15.8 billion yuan ($2.4 billion), up 39% from a year ago. Net profit rose 142% to 2.2 billion yuan during the three-month period, according to the company’s financial report released late Tuesday.

The strong performance reinforced the retail giant’s business revival since the second quarter, following a 44% sales plunge during the first three months caused by business closures amid the Covid-19 outbreak.

Almost all new cars sold in China will be battery powered by 2035, blueprint predicts

Upon completion of the deal, Ke Liming, cofounder of Shanghai Ruyi, will hold 27% of Hengten, replacing Tencent Holdings Ltd. as the company’s second-largest shareholder, with China Evergrande Group and Tencent holding 40.62% and 14.1% respectively, the filing showed.

Huawei founder says Chinese tech research is similar to that of the U.S. before World War II

Ren Zhengfei, founder of Huawei Technologies Co. Ltd., took aim at China’s scientific research sector, comparing the situation to that of the U.S. before the Second World War.

At that time, American science was utilitarian, relied on European science and paid no attention to basic research, resulting in short-cycle industries with short-term outcomes, Ren said in comments at multiple top universities in Beijing last month, according to a post (link in Chinese) published Tuesday on Huawei’s online forum.

When the Second World War was coming to an end, the U.S. steered toward basic research, gradually reducing dependence on European research and becoming a front-runner in the fundamental research field.