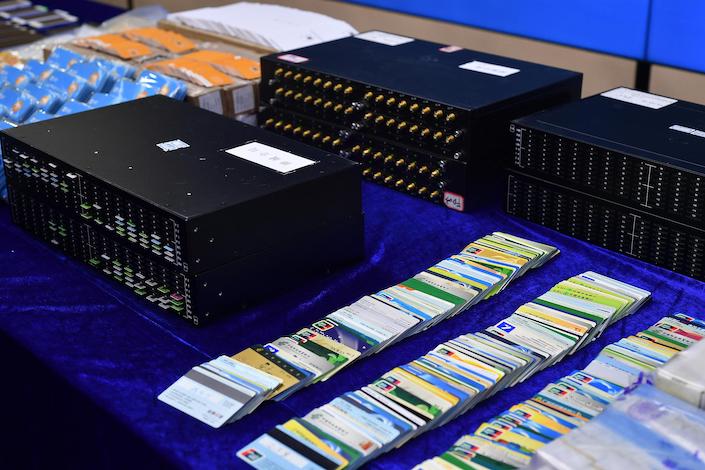 A migrant worker from the northern Chinese city Baoding “loaned” three credit cards under his name to friends to offset 2,500 yuan ($380) of debt he owed. He never imagined he would later be arrested for illegal sale of credit cards that were used by criminal groups to launder money for online gambling.

In the first nine months of 2020, police cracked down on 1,700 online gambling platforms and 1,400 underground banks involving more than 1 trillion yuan ($153 billion) of illegal transactions, data from the Ministry of Public Security showed. That compared with 7,200 online gambling cases in 2019 totaling 18 billion yuan.

In the cross-border online gambling chain, mobile payments play an increasingly important role. As the front-runner in mobile payments, China has been aggressively promoting payments via mobile phone scans of QR codes, a type of barcode. In China, even a street food vendor owns a unique QR code for receiving mobile payments. The convenience associated with mobile payments has also attracted criminal gambling groups.

China’s biggest fintech companies removed savings products linked to regional banks from their online platforms amid heightened scrutiny from regulators concerned that the funds are being raised by unstable smaller lenders and could fuel financial risks.

The news follows confirmation Friday by Ant Group Co. Ltd., the country’s dominant online fintech platform, that it had halted the service on its Alipay mobile payment app in accordance with regulatory requirements.

A month after a state-owned coal mining company’s surprise default rattled the country’s bond market, the securities firm that allegedly helped it break the rules said it is punishing several executives following a regulatory probe.

Haitong Securities Co. Ltd. criticized and fined several of its senior staff for violating “the industry’s self-regulatory rules” and company rules, according to a statement (link in Chinese) published Saturday.

To achieve China’s promises to reach peak carbon emissions before 2030 and carbon neutrality before 2060, Liu said at a forum Friday that the two commitments could bring about a “revolution to future technology and growth models” in the country. “We had better start now,” he said.

He suggested that Beijing should include the two indicators — carbon emissions and carbon intensity — in its 14th Five-Year Plan, a roadmap for the country’s development from 2021-25, and release data on a regular basis.

China introduced a new regulation that will allow government agencies to preview, deny and punish foreign investment activities in areas that are deemed as important to national security.

Foreign investment involving production of military products, development of key agricultural, energy and natural resources as well as critical infrastructure and internet technology are subject to government review, the National Development and Reform Commission said Saturday in a statement.

The new regulation was drawn up based on the country’s existing foreign investment and national security laws and jointly issued by the NDRC and the Ministry of Commerce. The rule will be effective within 30 days, according to the statement.

China mulls retaliation after U.S. blacklists drone-maker DJI and others

China’s Ministry of Commerce said in a statement (link in Chinese) over the weekend that the U.S. has “generalized national security and abused export controls to suppress other countries’ enterprises, institutions and individuals,” severely damaging the international economic order, free trade rules and the security of global supply chains.

Beijing’s response came after the U.S. Friday added around 60 Chinese firms to the blacklist for “actions deemed contrary to the national security or foreign policy interest of the United States,” according to a U.S. Department of Commerce statement.

A cold snap and rapid economic recovery pushed demand for power to record levels in large swathes of Central China last week, leading to shortages that prompted many areas to limit consumption and resort to controlled blackouts.

The problem has been compounded by recently soaring coal prices, since plants powered by the fossil fuel supply about half of China’s electricity. Domestic coal supplies have been squeezed recently due to tighter inspections following a series of recent mining accidents; imports have also plunged as most users have stopped buying from one of China’s leading suppliers, Australia, amid recent trade frictions.

President Donald Trump Friday signed legislation that could kick Chinese companies off of U.S. exchanges unless American regulators can review their financial audits, a move likely to further escalate tensions between the two countries.

The measure, which could affect corporate giants like Alibaba Group Holding Ltd. and Baidu Inc., serves as another parting shot at Beijing before Trump leaves office in January.

The delisting law won bipartisan support in the U.S. House of Representatives early this month after easily clearing the Senate in May. While it applies to any foreign company, the bill’s sponsors have said their goal was to target China.

Japan and China will launch a joint project to create one of the world’s largest methane production facilities in northern China that reuses carbon dioxide and surplus hydrogen, Nikkei learned.

The two countries hope to establish the technology and provide it to emerging and developing nations. The project aims to produce methane from hydrogen and carbon dioxide emitted from industrial production in the Yulin Economic and Technological development zone in Shaanxi province. Recycling carbon in this manner reduces greenhouse gas emissions.

The joint project is expected to be operational in the mid-2020s. Japan’s economy ministry and the New Energy and Industrial Technology Development Organization, or NEDO, an agency affiliated with the ministry, will support the project.

Hong Kong bans flights from U.K. due to virus spike

Editorial: Regulators are right to take on competition-killing big tech