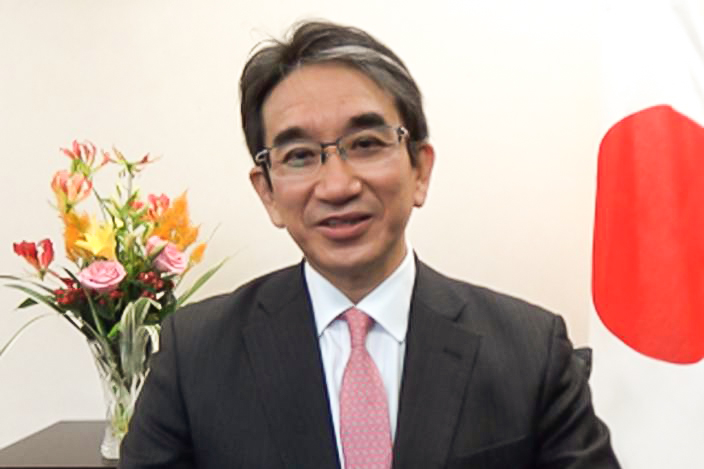 Japan’s new envoy to China called on Tokyo and Beijing to break the cycle of ups and downs in their relationship as Japan undergoes it first leadership change in nearly eight years.

In a written interview with Caixin, Japan’s new Ambassador to China Hideo Tarumi said the two countries should focus on the battle against the coronavirus before holding high-level talks. President Xi Jinping had planned to make his first state visit to Japan in the spring of 2020 but canceled it because of the pandemic.

Tarumi envisions bringing relations between the two countries into a new phase. “I believe Japan and China need to graduate from the era where the bilateral relations deteriorate fundamentally immediately after a problem arises or suddenly improve, or where business is affected by the turbulence in the relations," he said.

China and the European Union were just a week away from missing the year-end target for their sweeping new investment accord when China made a key concession on accepting international conventions on forced labor, EU Ambassador to China Nicolas Chapuis told Caixin in an interview.

China's last-minute commitment to ratify the fundamental conventions of the International Labor Organization (ILO) cleared away the final hurdle, the French diplomat Chapuis said. Chinese and European leaders announced a political agreement on bilateral investment Dec. 30, opening China to expanded access by European companies. The two sides have since been finalizing the legal text.

Chapuis, who was involved in the intense December negotiations, said the EU was still not ready to come to an agreement just a week before the deadline.

TikTok owner ByteDance Ltd. launched its own digital payment platform, setting the stage for the short video powerhouse to square off against China’s tech titans Alibaba and Tencent in the massive e-commerce market.

Douyin, the sister app of TikTok for internet users in China, debuted its eponymous e-wallet Douyin Pay Tuesday, putting itself in direct competition with Alipay and WeChat Pay by allowing users to purchase items from third-party vendors, buy virtual gifts for performers and pay to watch their shows, as well as buy goods during livestreamed e-commerce sessions. These sales events exploded into prominence in China last year as consumers left homebound turned to online shopping and entertainment.

The launch comes as ByteDance accelerates its move into the nation’s e-commerce sector after it removed links to third-party shopping platforms like Taobao, JD.com and Pinduoduo from its app in October.

China is attracting a flood of foreign direct investment (FDI) as the world’s second-largest economy continues its comeback from the fallout of its Covid-19 epidemic.

Last year, China’s utilized FDI, excluding investments in banking, insurance and securities, rose 4.5% to a record $144.4 billion, accelerating from 2.4% growth in 2019, according to data (link in Chinese) released Wednesday by the Ministry of Commerce.

China’s single-month utilized FDI stopped shrinking year-on-year at the start of the second quarter of 2020 as the economy got back on its feet with the help of government stimulus and relief measures.

The Hong Kong stock market started strongly this year after lagging behind major global markets in 2020, boosted by record southbound flows through the Shanghai- and Shenzhen-Hong Kong connect programs.

Wang Tao: China will return to deleveraging as pandemic retreats

China’s most famous businessman, billionaire Jack Ma, surfaced at an online conference Wednesday, months after his disappearance from the public eye fueled speculation that he may have run afoul of the law.

The outspoken founder of Alibaba Group Holding Ltd. spoke at an annual online event promoting the achievements of rural teachers Wednesday, according to video of the event seen by Caixin. Ma himself started out as an English teacher before going on to found Alibaba, which is now one of the world’s most valuable companies with a market value of nearly $700 billion.

The news of Ma’s reappearance sparked a rally in the company’s Hong Kong-listed shares, which rose nearly 9% in Wednesday trade.

WeChat, China’s largest social messaging platform, reported a doubling in transactions via its mini programs last year as it seeks to expand its presence in the short-video market.

The number of daily active users of its mini programs, which give users instant access to enterprise services, surpassed 400 million. Total sales, or gross merchandise value (GMV), facilitated by mini programs grew more than 100% year-on-year, WeChat, which is backed by Tencent Holdings Ltd., said in a statement Tuesday. It did not reveal the actual GMV.

That represents a GMV of about 1.6 trillion yuan ($247 billion) generated through mini programs, according to Caixin calculations based on its 2019 GMV of 800 billion yuan, according to results it disclosed in early 2020. By comparison, Pinduoduo Inc., WeChat’s e-commerce rival, recorded 1.46 trillion yuan in GMV last year, according to its earnings report.

Volkswagen AG set the starting price of its first locally built all-electric sport-utility vehicle with its Chinese partner FAW Group Co. at 199,900 yuan ($30,800) after subsidy, descending into the mass market as a growing number of players jostle for share.

The ID.4 Crozz is built on VW’s MEB electric vehicle manufacturing platform, which is also used in some models of Audi and Skoda. The car is more than 40% cheaper than Tesla Inc.’s recently launched Model Y crossover, which starts at 339,900 yuan and isn’t eligible for subsidies.

Chinese cities and provinces home to a combined 250 million people announced targets to bring carbon dioxide emissions to a peak, fleshing out the country’s bold pledge last year to reduce emissions to net zero by 2060.

The major cities of Beijing and Shanghai, the industrial provinces of Guangdong and Jiangsu, and the island of Hainan have all included emissions peaks in their proposed five-year plans, which will align with the overarching national blueprint guiding policy through 2025.

The peaks refer to the point at which each region’s annual emissions reach a maximum. After that, they must make further sharp cuts to the amount of heat-trapping carbon dioxide they release into the atmosphere so that China can become carbon neutral by 2060.