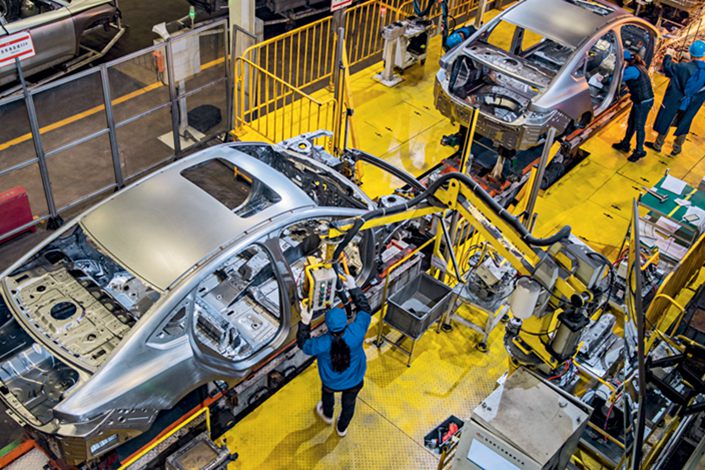 A chip shortage that has squeezed global automakers since late last year offered a snapshot of how the Covid-19 pandemic and geopolitical uncertainties have distorted supply chains in the highly globalized semiconductor industry.

The question is: Will it lead to a reshaping of the industry’s global landscape?

It’s a multibillion-dollar question involving massive investment flows and potentially sweeping economic and geopolitical consequences. As technology has advanced, semiconductors have come to dominate not only the auto industry but also almost every part of consumer goods manufacturing as the tiny electronic devices supply the brains for products ranging from computers to mobile phones to toothbrushes.

China decided to let couples have as many as three children, a significant change to the country’s family planning policy after the latest national census showed a low fertility rate under the current “two-child policy.”

The Politburo made the decision Monday during a meeting chaired by President Xi Jinping, according to the state-run Xinhua News Agency.

The decision aims to optimize the family planning policy with supportive measures in an effort to improve China’s demographic structure, respond to the aging population and maintain the country’s “human resources advantages,” Xinhua reported. It did not say when the change would take effect.

A joint venture controlled by internet giant Tencent Holdings Ltd. won a license to offer reinsurance services in the financial hub of Hong Kong, marking a new move into the financial services realm outside its Chinese home market, a knowledgeable source told Caixin.

The joint venture, FuSure Reinsurance, now appears on a list of businesses officially authorized to offer reinsurance services in the city, documents from the Hong Kong Insurance Authority showed. The company is based in Hong Kong and is in the process of setting up a website, the source told Caixin, speaking on condition of anonymity due to the sensitivity of the situation.

Here are four things to know about China’s infrastructure-related REITs.

Mao Bihua, former party secretary and director of the Chongqing Supervision Bureau of the China Securities Regulatory Commission (CSRC), was ousted from public service and the Communist Party for corruption, the country’s top graft buster and the CSRC said.

An investigation by the Central Commission for Discipline Inspection of the Communist Party found that Mao designed and colluded in schemes to conceal a “huge amount” of bribes collected during his career. He also violated quarantine rules during the Covid-19 pandemic to travel and frequently join banquets paid for by companies he regulated, the graft buster said.

The southern Chinese metropolis of Guangzhou is rolling out travel restrictions and local lockdown measures as it battles a Covid-19 outbreak in which more than two dozen people were diagnosed with a highly transmissible variant first found in India.

Starting Monday night, people won’t be able to leave the capital of Guangdong province by rail, road or air unless they present a negative Covid-19 test from the preceding three days, according to a statement (link in Chinese) from local disease control authorities Sunday.

Related: Get vaccinated in Hong Kong, win a $1.4 million apartment

Editorial: When it comes to taxing property, the method matters

Data and 5G are two of the Chinese internet sector’s fastest-growing fields. But they have a dirty secret: an addiction to fossil fuels.

A new study shows how harmful that could be for the global climate. Chinese data centers and 5G base stations are poised to increase their combined power usage by 289% by 2035, according to a report published Friday by Greenpeace East Asia.

SF Holding Co. Ltd. plans to spin off its Tongcheng intracity express delivery service for an independent listing on the Hong Kong stock exchange as the Chinese logistics giant looks to steady itself amid a price war that has tipped it into loss-making territory.

The Shenzhen-listed company, which is one of China’s largest couriers and offers both domestic and international express delivery, said Friday the flotation of Hangzhou Shunfeng Tongcheng Industrial Co. Ltd. would help fund Tongcheng's expansion plans while enhancing its brand awareness and market influence.

Factories in South China’s Guangdong province, a major manufacturing hub, were told by power suppliers to cut their electricity use by suspending operations as rising power consumption amid hot weather strained the region’s power system.

Since mid-May, 17 cities including Guangzhou, Zhuhai and Dongguan have imposed limits on power usage. A subdistrict office in Dongguan, home to thousands of factories manufacturing products from diapers to clothing to cell phone parts, said off-peak power consumption measures will last till the end of this year.

Chinese food-delivery giant Meituan is working to address regulators’ concerns about its business, changing practices that sparked an antitrust probe while promising better treatment for its millions of drivers and restaurants.

The Beijing-based company set up a team to work with officials conducting the investigation and vowed strict compliance with new guidelines. It’s also providing insurance for its delivery force — a victory for an army of mostly part-time personnel — and cutting fees for partner restaurants.