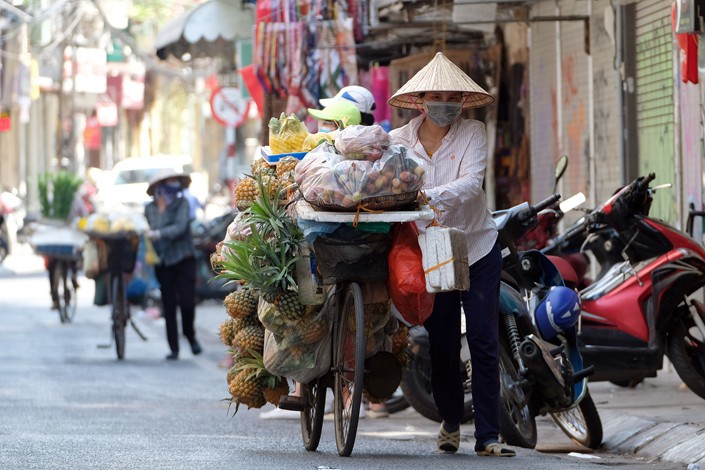 Taiwan isn’t the only place in Asia to have recently suffered a surge in cases after long keeping a lid on infections.

After Vietnam spent most of 2020 close to normality, the country started to set daily case records in May, recording thousands of cases over the past few weeks. The outbreak was characterized by multiple sources of infections, a variety of variants and rapid spread in industrial zones.

In Thailand, rapid transmission in prisons and among construction workers has pushed daily case counts into the thousands since April. Close to 10,000 cases were added May 17 to the country’s tally, more than in the whole of last year, though daily case numbers have generally been lower.

Tencent Holdings Ltd. said it will reposition its Weishi app to focus on film and TV content, as the short-video platform struggles to win users in an increasingly saturated domestic market dominated by Douyin and Kuaishou.

Weishi will pivot away from sharing user-uploaded videos and instead offer TV and movie clips, help to distribute Tencent’s licensed content and build a system to redistribute works by other creators, Sun Zhonghuai, the technology giant’s vice president, said Monday at a press conference in Shanghai.

A Chinese businessman with family links to the eldest son of jailed former security czar Zhou Yongkang was detained by police investigating the collapse of Sichuan Trust Co. Ltd., which was taken over by the provincial government and banking regulator last year amid concerns it couldn’t repay 25.3 billion yuan ($3.9 billion) of investors’ money.

Liu Canglong, who controls companies with a combined 54.2% stake in the troubled trust company, is being held by the public security bureau in Chengdu, the capital of Sichuan province, on suspicion of misappropriating trust funds, Sichuan Hongda Co. Ltd., said in a brief statement (link in Chinese) to the Shanghai Stock Exchange Monday. Liu is the controlling holder of Sichuan Hongda, although he is not a director and doesn’t hold any official position in the company, according to the statement.

GoTo Group, the company born from the merger of Indonesian tech giants Gojek and Tokopedia, appointed finance veteran Jacky Lo as its chief financial officer (CFO) as it moves toward a planned IPO.

The appointment, effective Monday, makes Lo the first CFO of GoTo Group, the largest e-commerce and online ride-hailing platform in Indonesia, according to a press release by the company. Lo, also known as Lo Wei Jye, held the same position at fintech business OneConnect Financial Technology Co. Ltd. from October 2019 to April this year, where he led the company’s New York listing in 2019.

“I want to express my profound gratitude to Tao for his wise counsel, unwavering support and tremendous contribution to the Fund and our membership,” Georgieva said in a statement.

The highly rated free trade port of the southern province of Hainan is likely to enjoy an additional tax benefit as lawmakers consider offering tax rebates on domestic goods entering the island.

Value-added tax (VAT) and consumption tax levied on such goods will be refunded, the state-run Xinhua News Agency reported (link in Chinese) Monday. It cited the latest draft of the Hainan Free Trade Port Law submitted to the standing committee of the National People’s Congress, China’s top legislature, for a third reading.

The provision, aimed at balancing taxes on domestic and imported goods and leveling the playing field for domestic and overseas traders, was proposed by some lawmakers during the second reading of the law, according to Xinhua.

Power major China Energy Investment Corp. plans to install 15 gigawatts of new solar and wind capacity this year, nearly triple its total from 2020, as the nation races to wean itself from fossil fuel-fired power ahead of China’s pledge to go carbon neutral by 2060.

The company and private equity firm PAG are selling 715 million shares at a suggested offering price range of HK$6.98 to HK$8.66 a share, 10% of which would be sold in Hong Kong and 90% globally, according to a prospectus filed with the Hong Kong Stock Exchange.

Investors can order shares starting Monday, and the offering is expected to be priced June 10. The stock is set to begin trading June 18.

China’s telecom and cyberspace regulators called on local governments to promote the development of blockchain technology in a newly issued document.

The document (link in Chinese) was released Monday on the website of the Ministry of Industry and Information Technology, and was jointly drafted with the Cyberspace Administration of China. It contains a lengthy discussion on the subject of blockchain, including reasons for promoting the technology and ways local governments can encourage such promotion.