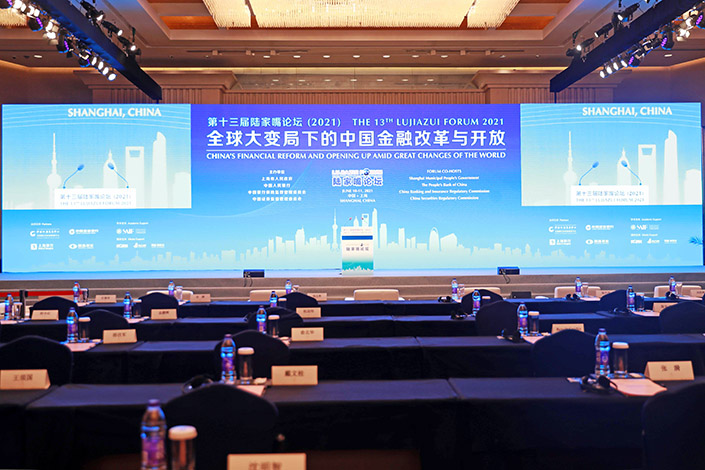 We aren’t clamping down on IPOs, China’s securities chief says

China’s IPO requirements haven’t gotten any tighter, or looser for that matter, the head of the country’s securities watchdog said Thursday, offering a rebuttal to the notion that authorities have increased scrutiny over new listings since the surprise suspension of Ant Group Co. Ltd.’s IPO last year.

At a financial forum in Shanghai, China Securities Regulatory Commission (CSRC) Chairman Yi Huiman argued that it is the market that chiefly sets the pace of IPOs. The number of new listings is determined by what investors can afford and the amount of liquidity in the market, Yi said at the 13th Lujiazui Forum (link in Chinese).

A total of 196 companies completed initial public offerings on Chinese mainland stock markets in the first five months of 2021, a year-on-year increase of 111%, Yi said. They raised more than 150 billion yuan ($23.5 billion), up 37% year-on-year.

He also warned of the consequences of loose monetary policy by governments around the world implemented to support their economies through the Covid-19 pandemic and defended China’s own policies against criticism it hadn’t done enough to support growth.

China’s Minister of Commerce Wang Wentao spoke with U.S. Secretary of Commerce Gina Raimondo over the phone Thursday on how to better cooperate on trade and investment, the latest sign of growing economic engagement between the two countries as the new U.S. administration continues to review its China policy.

The world’s two largest economies agreed to promote “pragmatic cooperation” on trade and investment and constructively work through their differences, the state-run Xinhua News Agency reported.

China’s central bank will include green bonds in an evaluation system for reviewing financial institutions’ business performance in green finance as part of efforts to fulfill Beijing’s ambitious climate goals.

The evaluation system, which was launched three years ago, will now include performance metrics for both green bonds and green loans starting July 1, compared with only green loans currently. Both are used to finance ecofriendly or low carbon emissions projects.

Big Chinese banks, insurers now required to plan for their own demise

China’s big banks and insurers will now have to make so-called “living wills” laying out contingency plans in case they collapse, a regulator said (link in Chinese).

The policy aims to improve the financial institutions’ ability to handle risks and reduce government bailouts, such as those given to Baoshang Bank Co. Ltd. and Hengfeng Bank Co. Ltd., according to (link in Chinese) the China Banking and Insurance Regulatory Commission.

Shanghai plans to roll out 5,000 hydrogen-powered vehicles within four years

Shanghai plans to roll out 5,000 hydrogen fuel-cell vehicles within four years in collaboration with a cluster of nearby cities, a local official said Wednesday as it awaits central government approval under an incentive program.

The plan involves the support of seven cities to develop a hydrogen fuel-cell industry chain, with two cities focused on research into key fuel-cell components and four focused on identifying where to use the vehicles, said Chen Kele, a Shanghai Municipal Commission of Economy and Information official, at the 6th International Hydrogen Fuel-Cell Vehicle Congress held in the metropolis.

President Joe Biden revoked Trump-era bans on the Chinese-owned apps TikTok and WeChat Wednesday and instead will order a review of software applications from foreign adversaries that could pose a risk to Americans’ sensitive data, senior administration officials said.

Biden, in an executive order, directed Secretary of Commerce Gina Raimondo to evaluate the apps and block those that pose a security risk. The order replaces former President Donald Trump’s actions, aimed specifically at Chinese companies including TikTok owner ByteDance Ltd. and WeChat owner Tencent Holdings Ltd., that would have banned the use of those apps in the U.S.

Juneyao links up with Trip.com while eyeing HNA assets

Shanghai-based carrier Juneyao Airlines Co. Ltd. entered a strategic partnership with online travel agency Trip.com Group, fueling speculation that the pair may link up in a bid for part of bankrupt HNA Group.

Under the partnership, Juneyao and Trip.com will cooperate in business development, strategic investment and digital innovation, among other areas, the companies said Tuesday. The companies are focusing on partnership in aviation and tourism services and may consider deeper cooperation in the future, a Juneyao source said.

OmniFoods, best known for making plant-based pork substitute OmniPork, will launch a range of artificial seafood on the Chinese mainland and in Hong Kong, its parent company said, deepening its push into one of the world’s fastest-growing markets for alternative proteins.

The range will include two types of plant-based fish-substitute fillet, as well as a burger, and tuna and salmon substitutes, according to a statement from Hong Kong-based Green Monday Holdings.