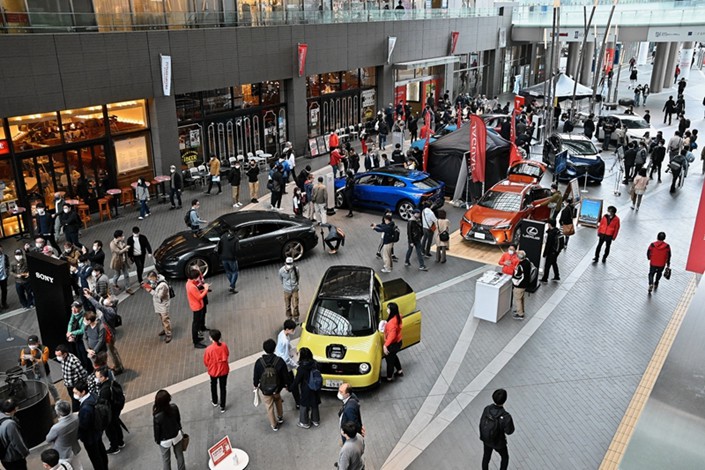 As part of Beijing’s carbon reduction goals, China’s traditional fossil fuel giants are racing to take the lead in hydrogen energy, cities are making plans to develop it as a clean power source, and automakers are developing hydrogen-driven vehicles.

A herd of more than a dozen wild Asian elephants migrating north in Southwest China’s Yunnan province has been lingering in a local county for six days, with experts saying they are waiting for a lagging member to return as authorities encourage the herd to turn back.

A young male elephant left the herd Tuesday when others crossed into Yimen county in Yuxi, a city about 90 kilometers (56 miles) south of the provincial capital of Kunming. He then spent three days roaming through the smaller city of Anning before entering a district in Kunming, according to state-run broadcaster CCTV. The elephant is now about 16 kilometers away from the 14 other members of the herd, CCTV reported.

China’s services recovery is still under pressure as tourism and box office sales during the Dragon Boat Festival holiday failed to rebound to pre-Covid-19 pandemic levels, official data show, and the hospitality sector in southern China was hit by pandemic flare-ups.

Compared with the same holiday period pre-pandemic in 2019, domestic tourism sales revenue was 74.8% and the box office rang up 59% of equivalent revenue.

Tourists made 89.1 million domestic trips during from Saturday to Monday, equivalent to 98.7% of the pre-pandemic level, according to (link in Chinese) the Ministry of Culture and Tourism.

China slams G-7 statement as ‘deliberate slandering’ of the country

The Chinese embassy in the U.K. Monday criticized a statement by the leaders of the Group of Seven (G-7) for the “deliberate slandering” of China, accusing the countries’ leaders of “gross interference” in its internal affairs.

The joint statement, issued by the leaders of the G-7, a club of the world’s seven top industrialized nations, during their summit in the U.K. Saturday, criticized, among other issues, China’s conduct in Xinjiang and Hong Kong, and expressed concerns over the situation in the Taiwan Strait.

Related: China warns NATO it won’t ‘sit back’ if challenged by the bloc

Yang, a member of the Political Bureau of the Communist Party of China Central Committee and director of the Office of the Central Commission for Foreign Affairs, stressed dialogue and cooperation in bilateral relations.

The southern Chinese city of Guangzhou lifted lockdowns in 11 areas of five districts as the spread of Covid-19 eases in the city.

The 11 areas are located in the districts of Haizhu, Tianhe, Baiyun, Huangpu and Panyu and meet conditions for lifting the lockdown restrictions, said Chen Bin, deputy director of the city’s health commission.

Briefing: What China’s financial regulators told us at the Lujiazui Forum

Yang Hongxin, the president of SVolt Energy Technology Co. Ltd., said at an industry forum that only 60% to 80% of orders for high-quality batteries were currently being met amid supply shortfalls that took root last year due to a lack of certain raw materials.

The global EV industry is battling a scarcity of the batteries that power electric cars and the microchips that run their systems. Both issues owe much to production shortages due to the Covid-19 pandemic.

Australia’s national science agency decided to end its research partnership with a top Chinese lab next year following a warning that the tie-up could impact the country’s national security, according to Australian media.

At least 25 people died after a gas pipe exploded at a residential community food market in Central China’s Hubei province, leaving dozens buried in the debris, according to Chinese media and local government statements. At least 138 more were injured.

The blast, which occurred around 6:30 a.m. Sunday in the city of Shiyan, caused the market in the Yanhu community to collapse, leaving many residents and vendors trapped underground, local authorities said.

The cause of the blast remains under investigation, local authorities said.

A Beijing court sentenced a pharmaceutical company owner to 12 years jail and handed jail terms of two to seven years to six employees for illegally trading in pangolin scales and other wildlife products.

The verdict was handed down May 21 by Beijing Xicheng District Court to Chen Xiangyin, of Beijing Sanhe Pharmaceutical Co. Ltd., and his employees. In addition to the prison terms, the company was fined 2 million yuan ($312,500), and Chen was fined 120,000 yuan.