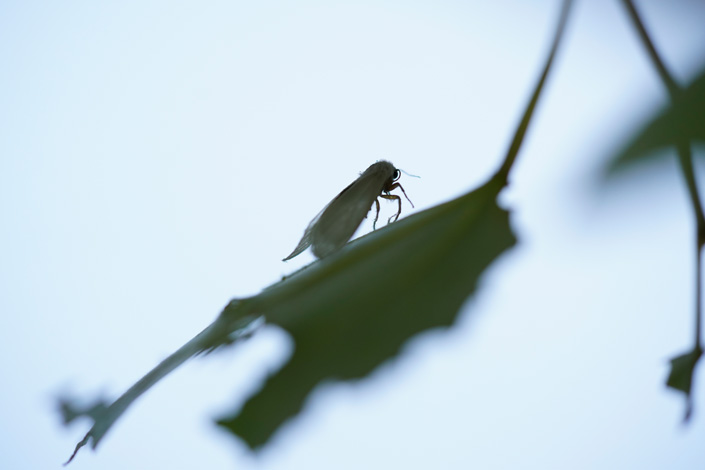 In Depth: Combating the North American pest that has reveled in Beijing’s wet summer

After 18 years, residents in Beijing have become familiar with the small snow-white moth. It can grow to a centimeter long, and with two long tentacles, white wings and a fluffy back, looks something like a small hat. But this invasive pest from North America has a destructive power that has earned it the nickname, the “white robe wizard.”

In late September, a large number of dark gray caterpillars, the larvae of the moth, were seen on Beijing’s roadsides. The insect, which feeds on the leaves of trees and crops such as corn, appears to have enjoyed the city’s recent months of high temperatures and high humidity, reproducing in large numbers.

The pest, responsible for damaging 179 species of plants, was first found in the northeastern Chinese province of Liaoning in 1979, before spreading to Shandong and Shaanxi provinces and causing a moth plague in the early 1980s. As of this year, the insect has been spotted in at least 607 counties in 13 provinces.

China’s special climate envoy Xie Zhenhua said at a press briefing Tuesday that he expects countries to reach a deal on carbon market rules that fall under Article 6 of the Paris Agreement at the U.N. Climate Change Conference (COP26) in Glasgow.

Xie said that countries have reached political consensus on the issue and the next step is to solve technical problems, according to state media. He also noted the inclusiveness of the Paris Agreement, saying it is important to transform countries’ political will into action.

“Protection of personal privacy is a must, when each and every move of us has a record in data,” said Yi. “Some big techs have either collected data without permission or misused them. There are also cases of customer data leakage. Therefore, it is urgent to strengthen personal data protection.”

Activity in China’s services sector continued to expand in October thanks to the fading impact of the previous round of Covid-19 flare-ups, though service providers were under higher inflationary pressure, a Caixin-sponsored survey showed.

The Caixin China General Services Business Activity Index, which gives an independent snapshot of operating conditions in the sector, rose to 53.8 in October from 53.4 the previous month, according to the survey report released Wednesday. Readings above 50 signal expansion.

The Caixin China General Composite PMI, which covers both manufacturing and services sectors, rose slightly to 51.5 in October from 51.4 the previous month, according to the survey report.

Kangmei may get $1 billion rescue led by Guangzhou Pharmaceutical

State-owned Guangzhou Pharmaceutical submitted the investment proposal on behalf of a consortium made up of state-owned investment firms, which are also investors in a newly formed entity to temporarily take control of Kangmei under a bailout orchestrated by the Guangdong provincial government. Guangzhou Pharmaceutical already controls operating rights to Kangmei, analysts said.

Shi Jianxiang, a high-profile fugitive wanted in China over a 43.4 billion yuan ($6.3 billion) illegal fundraising scheme, was charged with visa fraud in a court in Florida after being arrested in Las Vegas where he was promoting cryptocurrency.

A federal grand jury in South Florida indicted Shi Thursday on two counts of fraud and misuse of U.S. non-immigrant visas, according to a U.S. Department of Justice statement. He was denied bail as he was considered a flight risk, and he will remain in detention before his trial in Miami. He could face up to 10 years in prison and a fine of as much as $250,000 if convicted, the statement said.

Byton suspended worker payrolls while its factories halted operations, according to a person close to the company. Byton, which unveiled its first M-Byte concept car in 2018, has yet to start commercial production that was originally scheduled for 2019.

Companies including Foshan Haitian Flavouring & Food Co. Ltd., Jiangsu Hengshun Vinegar Industry Co. Ltd., and Chacha Food Co. Ltd., have raised their prices as much as 18% in the past month.

Researchers in China say they are pioneering a way to produce livestock fodder from exhaust gas at an industrial scale in a move that could one day reshape commodities markets and reduce the nation’s dependence on foreign soybeans.

The process uses a special microbe to synthesize animal feed protein from simple carbon and nitrogen sources at a clip that makes it a promising alternative to natural options, according to a report from a newspaper run by China’s Ministry of Science and Technology.

The Hong Kong International Airport (HKIA) is preparing to launch an autonomous bus service, marking the latest step in its use of self-driving technology to enhance efficiency.